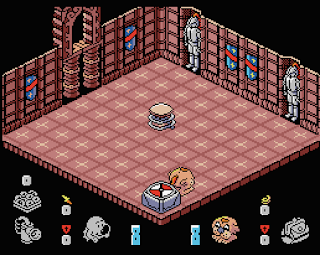 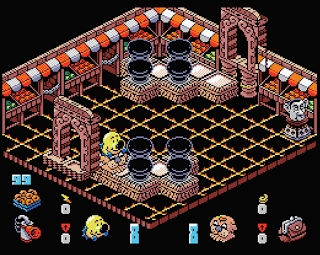 Even the mighty 16-bit machines didn't jazz things up much - the Amiga version definitely wasn't monochrome and instead featured some strange, even garish colour schemes - but this new version is the best looking one so far in my view. The colours, at least from what's been seen so far, are great and the characters and peculiar rooms all look fantastic! Even if it didn't, though, it's still Head Over Heels, a game that always earns a retro-head's attention, and how could it not? Isometric games rule anyway, but the inventiveness and quirkiness of the game-world here coupled with its sheer size (300+ rooms) made it an instant classic. Firing parmping doughnuts as Head or scampering away from bubble-robots as Heels were among many memorable moments it offered, and who could forget the moment you were able to bring the two unusual creatures together? A game with dual-character co-operative play still isn't that common nowadays, nevermind in the mid-80's? Fuggedaboutit!

Finding out about projects like this really warms my oft-barren heart, and I'm sure many of you feel the same way. So, if you fancy adding this wonderful release to your collection, it will be released on cartridge with full instructions and packaging, and will no doubt also be available as a digital download too, so head over to the relevant thread on the MSX forum here. It's in Spanish but Google Translate can do its thing, and I believe Mr. FX speaks English too, so alternatively, feel free to bung him an email here: system.msx@gmail.com.