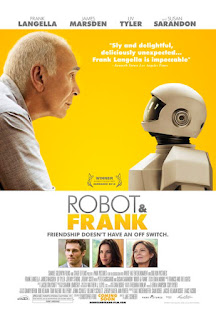 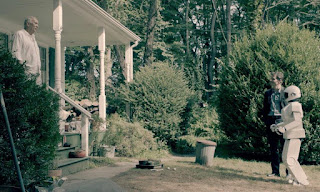 There is nothing malevolent about the nameless automaton though, and the poor old clanker does his best to help an unreceptive Frank who remains untrusting of him (or it?). He soon starts to change his mind, however, upon learning that (somehow) the robot has not been programmed to distinguish between legal and illegal activities. See if you can guess what brainwave this discovery leads to? That's right, it may mean an end to Frank's retirement! Further evidence of this comes when Frank starts teaching Robot to pick locks - something for which he demonstrates a strong aptitude - and it's not long before they're planning their first 'job' together, namely the theft of a rare book for Jennifer (Sarandon), the local librarian for whom Frank has the hots. Practise run complete, on to the first proper job! 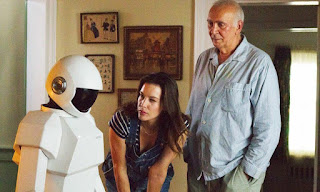 It's certainly an interesting premise for what is technically a sci-fi film. Indeed, it makes a nice change to see some robots that aren't going crazy and trying to kill us or some such thing. The examples here are a fairly realistic interpretation of what we can expect in a couple of decades or so, I'd say, including the functional (and rather uncool) design, and their inevitable arrival will no doubt bring with it all sorts of moral and ethical dilemmas. Even Frank doesn't escape - his initial disdain for the robot (voiced by Sarsgaard and performed by Ma) and what it represents soon gives way to begrudging acceptance and, eventually, even something resembling actual affection. And who can blame him? Robot quickly proves himself to be a very helpful and surprisingly appealing fellow to have around the place. 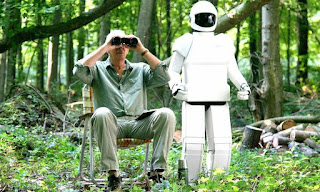 As a film, I suppose I can see how some may find it a bit boring - the pacing is slow, and even the big heist is rendered virtually tension-free by way of being intermingled with its planning - but Langella is fantastic, showing everyone how apparently effortless an all-too-rare starring role is for him, and the rest of the small cast do fine jobs too, particularly Sarandon, Liv Tyler as Madison, Frank's daughter who objects to the robot even more then he initially does, and Jeremy Strong as an obnoxious property developer. I really haven't seen too many films I could compare to Robot & Frank but it is superbly written and produced, has a great central performance, and the end result is a touching meditation on aging, poignant-but-engaging, which, conversely, just gets better and better as it goes.