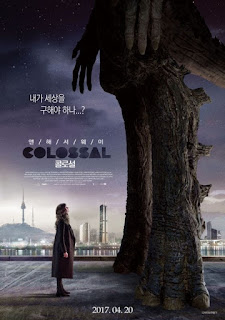 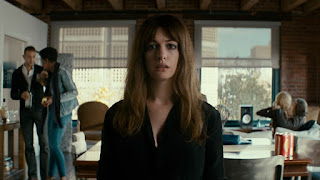 She also soon starts noticing news reports that reveal Seoul is under nightly attack from a giant black reptilian monster which is smashing buildings, trampling people, and generally causing chaos for a brief time before it seemingly vanishes abruptly into the same crackly nothingness from whence it came. After a few hangovery afternoons of waking up to these reports, she begins to wonder if there might be some sort of unlikely link between her intoxicated activities and the gormless behemoth making headlines around the world. It's difficult to imagine how there could be, but this is a rather strange film if you hadn't guessed that already. It's actually strange in more ways than you might think too. 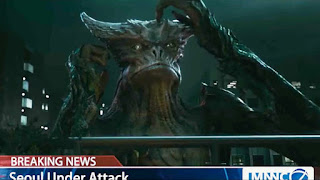 That rather misleading tagline is at fault for that, or partly at least. Indeed, the world is never actually in danger here, so it doesn't even need saving (well, not any more than it already does, anyway). The story is much more personal than that, focusing almost only on Gloria and Oscar and the old and often volatile relationship between them - something exasperated by the former's discovery. I'm not sure how much I liked this personally, though, as the two very different types of film just don't seem to go well together. You could look at the monster aspect of the film in a more symbolic light but it's still very much there and is treated accordingly, and surprisingly the novelty wears off fast - the human cast are actually a great deal more impressive for me. 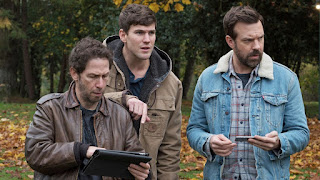 Oscar's sudden change in attitude mid-way through the film was a bit strange and not entirely welcome but both Hathaway and Sudeikis put in fine efforts, particularly the latter in a rare non-comedic role, but sadly even they were not enough to help the film 'grab' me the way it apparently has so many others. I love weird films and count some among my faves, but there was just something rather vexing and very unsatisfying about this one. I can't help feeling a great deal more could've been done with such an unusual concept but all we get is basically just an epic quarrel between two old friends but with an added 'colossal' twist (chortle!). It looked very promising at first but my disappointment grew as its run-time did. It's still worth watching as there really is little else like it but I wouldn't get carried away with your expectations.