It was the Master System version of the game where I first met this grotesque abomination, and of course, as an early owner of the mighty MegaDrive I soon also had the pleasure of his company on that splendid console too. I don't recall either version revealing this in their instruction booklets but apparently the brute is known as Aggar. Whether he is based on a 'real' (i.e previously established mythological) creature I'm not sure but his appearance is a memorable one indeed. As the unnamed Ancient Greek Warrior under your control reaches the end of the first stage he's confronted by the evil Demon God known as Neff who seemingly finds it amusing to summon Aggar from the Underworld, bubbling into form right in front of you. He looks suitably formidable too - a towering twisted blob with bones embedded in his revolting bulk and a scowling horned head at his summit.

His appearance might've seemed a good fit for a boss in a game with this setting but it was when he began unleashing his evil fury that he really cemented his place in gaming folklore. He didn't punch you or shoot fire or anything like that. No, what he did was tear his head off... and throw it at you! Repeatedly! For yes, it seems the already-disturbing Aggar has the ability to grow infinite new heads almost instantaneously and can continue throwing them, complete with scary screaming face and jagged fangs, for as long as our Warrior draws breath (assuming zombies breathe). Despite the fact that it's soon raining nightmare heads, however, he isn't actually very difficult to defeat as the werewolf's fiery shield sees him safely through any heads in his immediate vicinity, but deceptively-feeble or not, there's no doubt that this head-throwing imbecile had a big impact on most of us at the time and remains one of gaming's most memorable bosses. 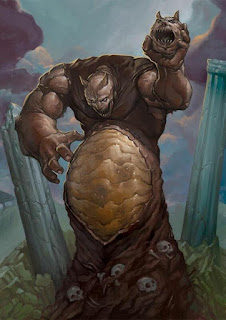 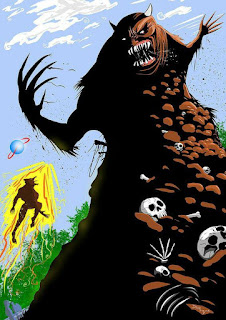 Here's a couple of pieces of artwork I found depicting Aggar in two very different styles. I'm not sure if they are official promo artwork (the left one looks like it might be, particularly) or just some nice pieces of original art by fans, but either way they're pretty cool. Neither is anything to do with me so credit where it's due :)