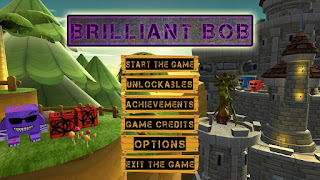 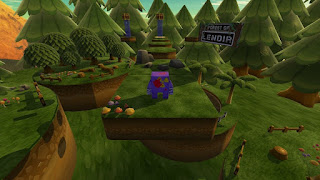 Strangely, this appears to take the form of a 3D platform game where the object is apparently to simply steer Bob toward the exit of each stage. These are spread across three areas - Forest, Castle, and Dr Magazi - and most consist of a series of floating platforms which come in various sizes. Many are stationary but some move about, others are angled, and there can often be more than one way to reach the exit which is a glowy portal/teleporter of some sort. There are hazards and obstacles here and there which includes boxes that Bob can pick up and reposition to more easily reach certain areas or platforms, but there are of course many more dangerous examples too, including enemies which appear to be terrifying slime creatures of some sort. 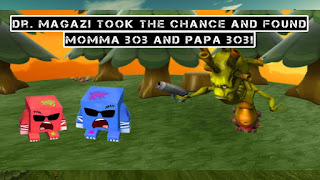 These pesky things zero in on Bob as soon as he's within range and rob him of precious health points. They can be killed but I'm not entirely sure how many ways there are to do this. Throwing red boxes with biohazard markings definitely does the trick, and you can also fool them into falling off the edge of platforms, but that of course means getting close enough to risk falling off yourself, and this will happen many, many times, whether you are being hounded by slimes or not. Happily, there isn't a time limit and you restart a stage as many times are you want, but that might not be too many times, I'm sorry to say. This is due to a number of issues that collectively make Bob's adventure somewhat less than Brilliant to play for more than... two minutes or so. 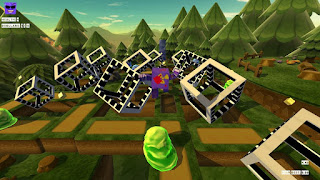 As mentioned, the stages mostly consist of many floaty platforms, so much of the gameplay involves jumping about all over the place, usually while avoiding slimes and/or hazards, to reach the teleporter exit thing. As you might imagine then, of particular importance here are two aspects of the game: the controls and the camera. These are, however, both guaranteed to cause desk-smashing levels of anger here. The camera is definitely the least bad of the two - it actually isn't too bad except for the need to control it manually using your controller's shoulder buttons which isn't easy if you need to move/jump at the same time. Otherwise you'll need to know where to jump ahead of time because you won't be able to see, and that means a lot of practice. 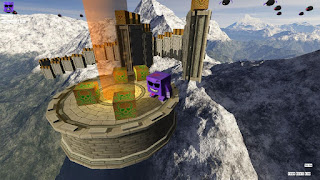 The controls, on the other hand, will probably cause you nightmares for years to come. Bob's normal jumping ability is only average so is complimented by a double-jump. It's easy enough to perform - just press the jump button while near the apex of a jump. Unfortunately, however, it often fails to work at seemingly random intervals. Bob also moves with a little inertia; not too much but enough to consistently affect jumps and landings. The latter can be hard enough to judge as it is, too, since there's no shadow to help pick a landing spot. The sun casts a shadow but that's usually over on the horizon somewhere so it's no use for helping you gauge your jump distance. Perhaps worst of all, though, are the moving platforms which jolt Bob around when they change direction. 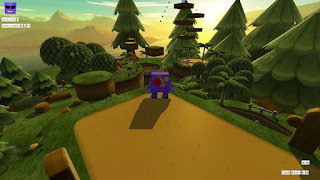 This might not sound too bad but it often causes him to fall off and can be particularly infuriating if you've just made a difficult jump only to be shunted off the edge. Grrr! This kind of thing really ruins Brilliant Bob which might otherwise have been pretty decent for a cheapie indie platformer. Its Unity-powered graphics aren't bad - I like the lush greenery all over the place - but sadly there really aren't many more positives here. Presentation-wise, it's much rougher around the edges than most examples I've played, the attention to detail is sorely lacking in some areas, and there are no appealing little touches like a death animation or noise (you just silently fall and start again). It hasn't even been optimised for different resolutions despite giving you many such options. 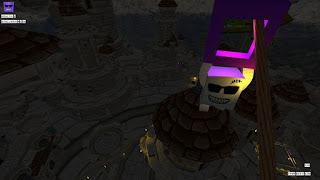 It just isn't a very enjoyable game to play. With most platformers I have an almost-OCD-ish need to find and grab all the collectibles I can, but not here - I don't even try unless they're right in front of me as I just know it isn't worth the very likely possibility that I'll fall while trying. For a game with such an emphasis on precision jumping for pretty much its entire length, it's amazing how loose the controls are. Character movement is far too imprecise to make much progress a realistic proposal. It's not that it's impossible - apparently a speed run will see the game finished in just under 20 minutes if you're supremely patient - but you'll almost certainly get fed up with falling to your doom over and over again long before that. It didn't take me too long to lose my patience! 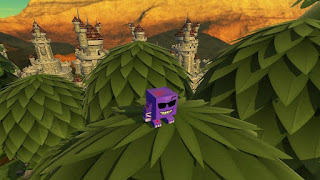 So, to cut an already rather long story slightly shorter than it would have been, Brilliant Bob was a big disappointment. I love platformers and was pleased to find a happy-looking one that didn't require endless killing but I have been left shocked and traumatised after enduring such prolonged spells of tremendous anger. I am of course exaggerating, I guess it's not that bad, but intense waves of exasperation surely await anyone who spends much time with this game. To give you an idea of how bad it is, the developer has now been banned from Steam, so we can't even hold on to the faint hope of any issues being sorted out! The premise could've made for an entertaining game, and it's entirely possible that Bob himself is indeed brilliant, but I'm afraid his game definitely isn't.