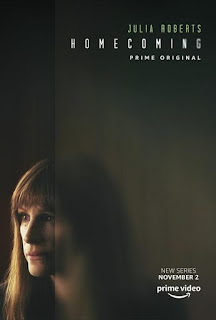 There are presumably a number of support staff and counsellors there but the only two we really spend time with are Heidi Bergman (Roberts) and Craig (Karpovsky). The latter helps the returning soldiers with basic group exercises such as mock job interviews but Heidi works with them one-on-one in much the same way as a psychiatrist might. Their boss is Colin Belfast (Cannavale), a supervisor for the Geist Group who has never actually been to the Homecoming centre, though he is in regular phone contact with Heidi and his other employees based there.

There are perhaps a few questions one might have about the centre and what exactly goes on there, but nothing seems too unusual or out of the ordinary to begin with. All the scenes there take place in 2018 - the present day, in other words. However, interspersed with these scenes are others that take place four year later by the show's calendar, which show that Heidi's circumstances have changed. The fancy house and boyfriend (Dermot Mulroney) are gone. She is now working as a waitress in a small cafe and lives at home with her mother (Spacek), apparently with no memory of ever working at Homecoming or of anything that happened while there, as revealed when she is approached by Thomas Carrasco (Whigham), an investigator from the Department of Defense, who is looking into an old complaint.

This investigation is the most interesting aspect of the show's story too. Partly because details of the events from four years before are gradually revealed to us as well as Thomas as he discovers them, but it's also thanks to Whigham's excellent performance as the dogged investigator. He seems like little more than an irritant to start with, which is apparently how his condescending boss sees him too.

But his determination to uncover the truth behind the Homecoming project will soon see you rooting for him, probably more than any other character. Julia Roberts is presumably meant to be the star of the show too, though she is also superb here. Her Heidi is much less glamourous than the type of character she usually plays and cuts a bit of a tragic figure at times, even in the earlier of the show's two timelines, but she also displays warmth and compassion, particularly during her counselling sessions with Walter Cruz (James), the main veteran the show focuses on. It's always nice to see Bobby Cannavale (from The Station Agent, one of my favourites) too, who's in dastardly form here as Heidi's stern, uncaring boss who's interested only in results at whatever cost. But results of what?

Well, that's the mystery isn't it? It is a strangely old-fashioned kind of mystery/thriller too, very much in the Hitchcockian mould, both with regards to its themes as well as the style in which it was shot. The former is welcome - there are few better directors to try to emulate than the Master of Suspense himself - but the latter is slightly less welcome. There are several references to the shooting style of other directors but Hitchcock's is by far the most obvious, from some of the camera angles used, the split-screens (most often during phone conversations), the loud, dramatic incidental music, and the differing aspect ratios as well (for the scenes set in the near-future, the screen shrinks to a 4:3 ratio). The style is so clearly Hitchcockian that even an uncultured oaf like me recognised it straight away!

It's definitely distinctive these days and does make the show stand out but it's also so deliberate it often seems like more of a gimmick than anything to do with the vision of the director. This, to me at least, made it a bit of a distraction, and the last thing you want with a thriller is to be taken out of the story for any reason. It doesn't help that the story isn't really all that strong.

It's a mystery to be sure, and everyone wants to see a mystery solved, but the stakes don't seem particularly high, leaving sympathy for the main character(s) as the primary draw, but Heidi doesn't inspire a huge amount, mainly because she never seems to be in any real danger. Nor does anyone else really. There are clearly shady motives behind the Homecoming project but there are no plans for genocide, world domination, untold riches, a new world order, or any other horrifying dark agenda going on, and once you've learnt Geist's secret despite their best efforts to keep it covered up, you might wonder if it was worth all the bother. For any faults it might have or any expectations that might go unfulfilled, though, it is still a fairly compelling mystery, and the whole production is of a high standard, including some fantastic performances and superb camera work.

Vitally, for much of its runtime it also has a tense, suspenseful atmosphere that even the Master would've been proud of. It's a slow-burner for sure but is worth watching if you have the patience for it, and with only ten 30-odd minute episodes, it shouldn't take too much. I just can't help feeling there should've been something more here though. The second season has already been confirmed but it will have a whole new story and set of characters, so maybe they'll go in a different, larger-scale direction with that. Time will tell, I guess...