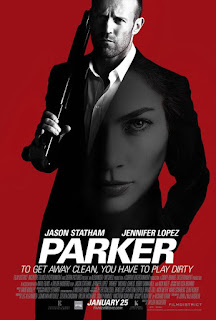 Tagline: "To get away clean, you have to play dirty."

Although released all the way back in 2013, the very first I heard of this film was when it popped up on the 'recently added' section of Netflix a while ago. From the cover and synopsis it sounded like yet another copy-and-paste Jason Statham action-thriller, but they can often be enjoyable in a fighty, switch-your-brain-off kind of way, so I thought I'd give it a go. It was only afterwards I discovered that's he's actually playing the star of a series of novels by Donald Westlake (written under the pen name Richard Stark), and that this film is actually an adaptation of the 19th book in the series! Crikey, I wonder why they didn't start with the first one? Anyway, the titular character is a master thief and career criminal - ruthless but principled - and is intended as something of an anti-hero. Sounds like Mr. Statham could pull that off easily enough, but do the literary origins of the story make the film a bit smarter than his usual fare?

Unsurprisingly, the film begins with Parker and his new crew on their latest job - robbing the takings from the Ohio State Fair. It goes almost flawlessly and his jubilant crew - Melander (Chiklis), Carlson (Pierce), Ross (Collins Jr.), and Hardwicke (Hauptman) - are keen to start planning their next one which requires all of their loot from their last job. Parker, unimpressed with their tomfoolery, declines the offer. Since they need his cut, however, they decide to simply kill him and take it. Naturally though, the bumbling oaf given the job of clipping him doesn't quite do a sufficiently thorough job. Some time later, Parker, having recuperated and learned of their plans from his mentor, Hurley (Nolte), targets them with his revenge-cannon. Happily, this vendetta takes him to sunny (and affluent) Palm Beach.

Here, he assumes the identity of Daniel Parmitt, a wealthy Texan, in order to find out what or who the crew now led by Melander plan to hit. He also has to look rich which, as well as driving a flashy Jag, also apparently involves wearing a ten-gallon hat. Of greater concern than this, however, is the need for Statham to again attempt a US accent. Previous attempts have not gone well but this is probably his most passable effort yet. Aside from this it's business as usual for him. I haven't read any Parker novels, admittedly, but Statham seems like a decent fit for this type of character - tough, smart in a street/criminal kind of way, ruthless if necessary, but kind and compassionate to normal, decent people. It's the kind of role he could probably sleepwalk through and if you've seen some of his previous films, you will already know what to expect from his performance here.

There was more buzz about Lopez from what I've seen, specifically the comedy she brings to the film, but I didn't really see much of that here. She plays Leslie, a struggling real-estate agent who ends up getting involved with Parker and his schemes, but she doesn't really have that much to do. It's almost as if they cast her but then couldn't figure out how to use her. Nonetheless, she does pretty well with what she's got, although it's probably not good if her most memorable scene is a somewhat unnecessary undies scene (Parker wants to make sure she isn't wearing a wire). Of the rest of the cast, it's Chiklis, Cannavale, and Nolte who stand out. It's always good to see the first two again - especially Chiklis who I don't think I've seen since his ultra-memorable run as Detective Vic Mackey. 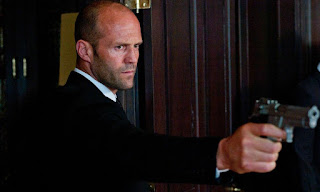 Despite the decent cast though, it isn't nearly as thrilling a film as it probably should be considering it's meant to be an action/revenge thriller. As mentioned, I don't know the source material - I didn't even know there was one until reading up prior to this review - but I can't imagine it's quite what the author would've had in mind if he was still with us (he passed away a few years previously). There's just too much padding, too many forgettable, unnecessary scenes. I'd rather have seen a more complicated, riskier heist with Parker and Hurley spending more time planning their elaborate double-cross, or something like that. Perhaps a bigger role for Lopez too. It's not a terrible film by any means, it just seems like a wasted opportunity. It was probably meant to be the start of a long and profitable series, but based on this effort I doubt we'll be seeing Parker on the big screen again any time soon.