There have been a number of attempts in recent years to launch new formats. Most of these sensibly don't try to take on the might of Sony, Microsoft, and Nintendo, but instead devise more humble systems dealing primarily with indie and homebrew titles. These are about the only modern games I like so I often take an interest in these formats/services, but they don't usually last long, sadly.

However, the latest example I've found is an interesting one. It's called PICO-8 and is described by its creators as a 'fantasy console'. That doesn't mean it only exists in your mind though. According to the blurb on their website, it's "like a regular console, but without the inconvenience of actual hardware". Many gamers, especially ones that collect and/or play retro stuff, are rather fond of physical consoles and games of course, and certainly wouldn't find them an inconvenience, but I get what they mean and it still sounded very intriguing to me. 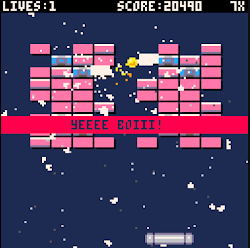 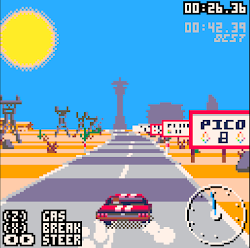 It is a whole new format though, apparently having its own machine specifications, display format, development tools, design culture, distribution platform, and online community, and it's from the latter that most PICO-8 games come. My limited intellect is frightened by the prospect of coding a game from scratch but happily the far more talented members of the community have been busy doing just that.

Each game is referred to as a 'cartridge' despite the lack of any physical media, and the people behind PICO-8 even say that coders are free to make money from their projects if they want to and think they can. Most, however, are seemingly uploaded and freely available to play via the console's homepage. The format's specs are quite restrictive too - besides things like the colour pallette and resolution, each cartridge has a maximum size of 32k - which means there are some very creative efforts. 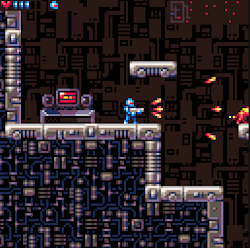 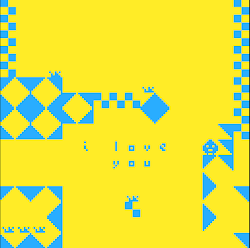 Many of the games are unsurprisingly based on existing retro classics. For example, there are cartridges based on Super Mario Bros, Castlevania, and the Dizzy series to name a few, but a greater number are original creations covering most genres including platformers, arcade adventures, shooters, puzzle games, bat 'n' ball, strategy, and even racing games. All of them are free to play online without limit too, as far as I can tell, but you can also download PICO-8 and use it offline.

This download will cost you $15 and, while it isn't made super-clear on their site, I believe you get the development pack and creation tools as well as the ability to use the console offline and a fancy cartridge browser. I did actually email Lexaloffle, the guys behind PICO-8, for clarification on this, but sadly they didn't get back to me. 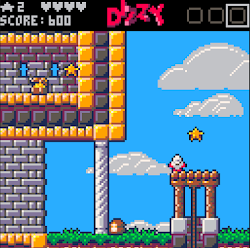 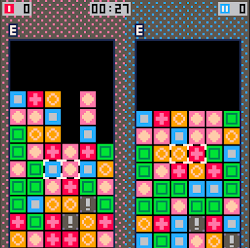 Whatever the details, though, it doesn't look as tough as you might think to actually make your own game, judging by the tutorial videos at least. I can definitely see how retroheads with the required skills could have a lot of fun messing around. By the nature of the format, most games are pretty simple, and often quite short too, but a good percentage of them are very addictive and a lot of fun.

I really like the idea behind this project. Not only does it give creative types a chance to do their stuff but there are hundreds of games to play for free too. If all that isn't enough for you though, or if you don't particularly like 2D games for some reason (how?), there's a 3D version on the way too! It's called Voxatron and features games made entirely out of voxels. Some of the games and demos for this format look pretty cool too, but I believe we'll have to wait a while to play them, assuming Voxatron follows the same model as PICO-8.

For now though, there are still tons of little 2D games to try out and I urge you to give some a try. Click here to visit the official PICO-8 website (which also has a link to the Voxatron site) - you're bound to find something you like! :)