Wow, these things take longer to write than I thought they would. And to think I was going to post all thirty in one go for my first post! I'm glad I decided to write just five a day (yes I know it hasn't been every day!), hope you're enjoying them (if anyone's even reading this!)... 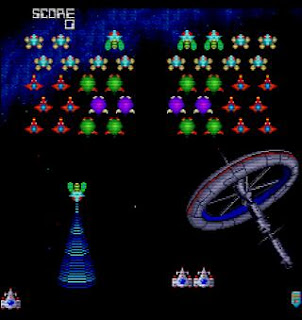 I've always preferred this series of shooters to other games of the type such as Space Invaders. There are countless versions of Galaxians/Galaga/Gaplus, but few could argue that this PC Engine update isn't the best. In fact, I'd even go so far as to say this is the Engine game I've spent most time playing ever! The fact that my good friend, Luke, gave me the HuCard for free certainly didn't help matters - it's addictive as hell! The graphics are hardly pushing the Engine hardware to its limits, but they are very appealing nonetheless. The sprites are well-defined and colourful, and there are now nice backgrounds too. The Challenging Stages from the original Galaga return here, beginning with an announcement of "That's Galactic Dancin'", and accompanied by some nice music! Anyway, nice presentation aside, it's Galaga, you know what you're getting. Simple, addictive fun. Right up my street! 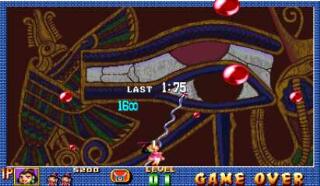 I still find it pretty amazing that the Pang games  weren't more popular here in the UK. This third offering, released here on the PS1 as part of the Super Pang Collection, is my favourite of the series. The same basic gameplay is prevalent - that is, destroy the bouncing balloons by shooting them with a harpoon gun, splitting them into ever smaller pairs until they're gone - but this time they've managed to tack on a story mode! You can choose between four characters - Don Tacos, Pink Leopard (my favourite), Captain Hog, and Sheila the Thief, each of whom fires a different type of harpoon, and also has an additional skill. Pink Leopard, for example, is able to go unhindered by the various enemies on each stage. It is then your job to journey around the world collecting various works of art by popping balloons! It's a crazy game but it's addictive and great fun! 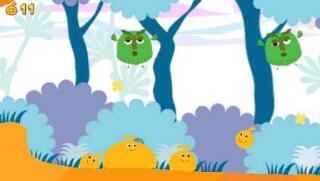 I knew from the first moment I saw a screenshot of LocoRoco that I wanted to play it! I had no idea what sort of game it was, of course, but that didn't matter. Just look at it! It wasn't until a couple of years later that I finally got a PSP, having convinced a guy at work that his one wasn't really worth much and I'd help him out by taking it off his hands! Hee hee! Anyway, the next thing I did was to trade in all the EA Sports crap that came with it, for LocoRoco. Finally it was mine! It was worth the wait too, what a crazy game! It's basically just a collect 'em up set in the happiest, most colourful game world of all-time, but instead of controlling any characters, you simply tilt the landscape back or forth, rolling the spherical, singing LocoRoco's around. It's great fun, features some very imaginitive levels, including more secrets than I can count, and a highly amusing soundtrack is the cherry on the cake! If you want to play a funny, happy game for a change, instead of all the violent nonsense around these days, give it a try! 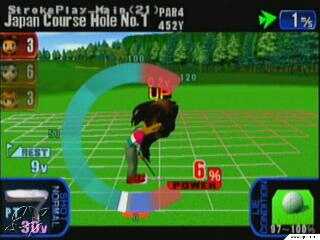 Yep, it's another golf game! I do really enjoy these Japanese cartoony style ones, and this is one of my favourites. I don't know about anyone else, but I find them very relaxing and enjoyable, and perfect for the times when I don't feel like dodging millions of bullets or making pixel-perfect jumps whilst fighting some evil monster. This one, by Bottom Up, is clearly based on Everybody's Golf for the Playstation, but that's no bad thing, and features five courses of varying difficulty - Japan, USA, Australia, Scotland, and South Africa. Each course has it's own look too, and there are several characters to choose from, and various game modes to play through. Granted, there's nothing terribly spectacular about this game but it suits me down to the ground! 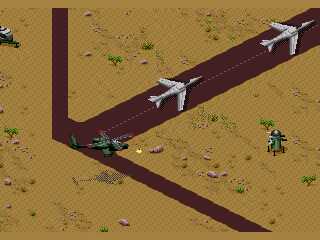 Released a short while after the first Gulf War, it doesn't take a genius to see where the inspiration for Desert Strike arose! However, regardless of its dubious genesis, surely even those most critical of its origins couldn't fail to be impressed by such a splendid game! Far from being an all-out shooter, Desert Strike is a free-roaming isometric-viewed game with more than a smattering of strategy tucked into it's rapid-fire cannons. Controlling a shiny new Apache Gunship chopper, you must complete a set number of missions per level. Some serve military ends, some political, but all must be completed before you have an opportunity to shove a Hellfire missile up "The Madman's" bunghole (clearly based on Saddam). The sequels added a lot to the formula, not least more vehicles to control, but it's this first game in the 'Strike' series that most gamers, myself included, still hold most dear.

That's it for now! RKS is tired and will have some dinner before retiring for a while. Next five will be here soon, as well as the first in my 'Top Five' series that I've been 'researching' today... ;)
Posted by RetroKingSimon at 10:39