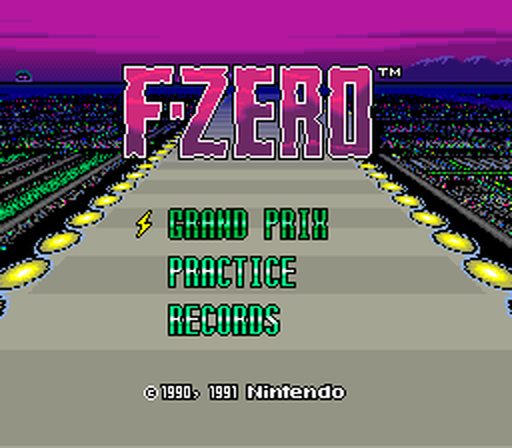 I have always been of the opinion that it's gameplay that counts, not graphics, hence my love of older games (increasingly in preference to new ones, in fact). This is my view and I stand by it. However, if there always seemed to be one genre that belied that stance, it's that of the racing/driving games. The way games of this type play, specifically the vehicle handling and play modes in my experience, has always been of the greatest importance, and that will always remain the case too, but due to the somewhat restrictive nature of the hardware available during the early years of the industry, we rarely saw examples of any kind. When we did, with the exception of a small number of classics, they were not often particularly spiffing. Either too much effort was put into making them look as pretty as possible, with the design and gameplay ending up tacked-on afterthoughts, or they simply couldn't make them look remotely convincing to start with. Then along came the SNES.

Regardless of your attitude to the question of style over substance, graphics are just as important as gameplay when it comes to racing games, and the SNES was surely the first home system to offer a real advantage on that particular field of battle. Mode 7 is what they called it; a new graphics-rendering trick pioneered by the wizards at Nintendo and unleashed in their 16-bitter. It's hard to explain but awesome to behold. It essentially allows a 2D texture-mapped back-ground layer to be scaled, rotated, and manipulated in all manner of ways. One big advantage of this is that the 2D playfield can be flipped into what appears to be a 3D perspective and rotated 360 degrees around whatever sprites appear on the screen at the time, creating the illusion of looking into the distance. This technique is perfect for racing games - instead of the vehicle negotiating the course, the course is rotated left and right around the vehicle, and it was first seen in..... you’ve guessed it!

F-Zero (short for Formula Zero), is in essence what Formula-1 might become in the future (assuming we haven't blown ourselves up before then). The Grand Prix mode is a racing series consisting of fifteen courses spread evenly over three leagues - Knight, Queen and King - and any league can be selected from the start, although they get progressively harder as you might expect. Before you begin you get to choose between four jet-car things, or 'machines' as they're apparently called, each of which varies in its specs and handling. Those you do not choose are your three main opponents during the races, controlled by the computer. Then you just need to choose a league and one of the three difficulty levels and away you go! The races are also populated by a large number of identical-looking drone vehicles who are there only to hinder your progress, and some of them are flashing, indicating that they're one hit away from exploding, so they're basically racing mines!

Each league consists of five mostly unique courses and progression to the next race is determined by your finishing position. Each of the five laps has a progressively higher ranking requirement to achieve in order to avoid disqualification. Beware however - if at any point you fall below 20th place, you're automatically disqualified. The fifteen circuits are all unique but are spread over only nine locations which means some places like Mute City, Red Canyon, and Port Town are home to more than one course, but each one is still varied and contains some original features. Jumps are quite common, but some of them occur shortly before a gap in the track - miss them and you'll plummet down to your death! Boost pads, slow-down zones, land mines, pull-down magnets, track-side magnets and slip zones are some of the other features, and all but the first are there to cause you problems! The courses themselves also deserve special mention - they are fiendishly designed and contain some of the sharpest corners you'll ever negotiate.

They include frequent 90 and even 180-degree turns, as well as long sweeping curves, hairpins, narrow straights, chicanes - everything you can think of really. The sides of all courses are secured by anti-gravitational guide beams, which don't do anything except stop you from falling off the edge of the course (which is a long way down in some cases). Hitting them will cost you some precious energy, however, especially if you crash at high speed which can cause you to bounce around like a pinball from one side to the other if you're not careful. Thankfully, your limited supply of energy can be replenished in the 'pitlane', such as it is. This is most often found somewhere along the start/finish straight and will 'whoop' energy back into your machine for as long as you remain there. Another handy, often vital feature is the Super Jet. You get one of these at the end of each lap and it provides a temporary (though substantial) speed boost, so only use it on straights!

The possibly-mighty-fine Grand Prix mode obviously forms the bulk of what F-Zero has to offer but it's not the full extent. Also available is a Practise mode, which allows you to do just that on seven courses from the various leagues against a chosen opponent, or no opponent at all (making it a time-trial mode, essentially). One common problem with many racing games in my experience is the difficulty curve. Happily, it's near enough perfectly pitched here. Sure, this can be a pretty frustrating game on the odd occasion, but it's also one that rewards perseverance. Plus, there are three difficulty settings for each league (and a fourth if you finish the others), so there's really no excuse! Each course location is very distinctive too. They all have their own tune and for the most part they are fantastic - many of them are still celebrated and remixed today, especially the old favourite, Big Blue - but it was those visuals the made most people sit up and take notice back then. It really was a genuine jaw-dropper when it was first unveiled.

Truly, nothing like it had ever been seen before, it was a revolutionary game! However, like most games that represent a leap in technical achievements, F-Zero has aged somewhat in the intervening time, and it's now possible to look past what it achieved to see some of the things it didn't. The biggest gripe has always been the absence of a two-player mode - as great as it is, F-Zero is strictly a game for the solo player. Another problem is that Mode 7, for all its wonderful trickery, is able to provide only completely flat racing surfaces, so there are no hills or banked turns or anything of that nature (something which the sequel rectified and then some!). Legitimate gripes or just nitpicking? Probably a bit of both is the cop-out but honest answer! Looking back, as good as it is, there's no denying F-Zero could've been even better, but it certainly hasn't decayed into a mouldy stain on Nintendo's record either. This is an exciting, frenetic, fun, adranaline-rush of a racing game, and remains, in my view, one of the first must-have racing titles for any console.

Gameplay Video: Here's me playing through the Knight League on the easy difficulty. No, my performance isn't especially impressive but this was the first time I'd played the game in about five years!