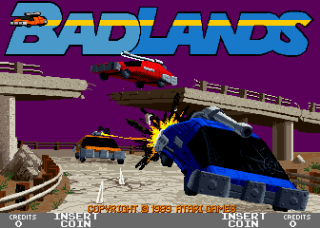 After helping to put the overhead racing genre on the map with Super Sprint, there was unsurprisingly soon a glut of similar games. Never ones to rest on their laurels, it wasn't long before Atari offered their own 'update' in Badlands. This is one of those games that I'd been hearing about for years but hadn't actually played until now for this review! Finally playing it yielded few surprises, however - aside from a few additions to the basic formula, an 'update' is about all it is - Super Sprint in different clothes! Not that that's necessarily a bad thing, of course; Super Spint is hardly a stinker itself. So how does Badlands differ from its forebear? Read on... 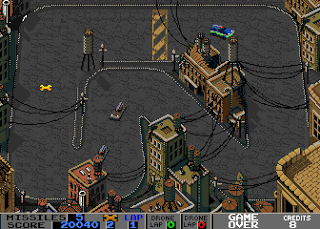 The most immediately obvious difference is the game's setting. Rather than the professional, organised world of Formula One, this series of races is contested in and around the ruins of a post-apocalyptic war! The game plays much the same as Super Sprint did, but the scenery is comprised of wrecked roads and terrains, and surrounded by various ruins. There are again eight courses and they are in much the same style as Super Sprint, getting progressively more complex until they start repeating. Racing over them are just three vehicles per race this time and, as can be seen from the title screen, they're not as delicate as F1 cars! They are armoured cars of some sort and each comes equipped with a roof-mounted cannon with which you take pot-shots opposing cars! This only slows them down and generally knock them around a bit but it's still pretty amusing! 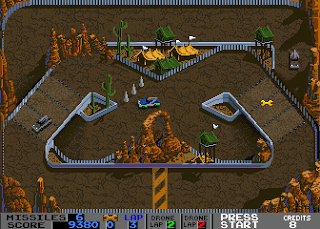 It's also possible to buy upgrades for your car between races using the golden wrenches once again, and you can even buy gold wrenches this time with any spare credits (i.e. money). Perhaps most notable among these are missiles. Arming your car with these babies causes a bit more inconvenience than the little roof-mounted cannon! They are heat-seeking to a degree - if there's a car roughly in front of you, you're guaranteed to take it out, but they won't chase your chosen victim round and round the course. Nonetheless, they're perfect for getting someone out of the way, or indeed for exacting revenge on a trigger-happy friend! Other upgrades include shields, speed, turbo, and tires. Luckily, the wrenches are plentiful enough and you should quickly boost your car's meagre specs! In addition to the missiles, the courses feature some hazards of their own, though mostly less extreme! They include the mildly inconvenient water and oil spills and broken/damaged surfaces (including a jump or two), and the more dangerous mines and retractable spikes. Some courses, particularly later ones, also feature the 'gates', first seen in Super Sprint, which allow short cuts, but only when they are open. Timing the use of these well can often make the difference between first and last place! There are some further differences between the two games, aesthetically, of course, but as far as gameplay is concerned, the difference is negligible. Even the courses aren't entirely unique here - the design of one or two is recycled from Super Sprint! The control of the cars is more or less the same too, although the turning circle of the cars seems to be tighter here, which obviously makes navigating the courses easier at high speed. 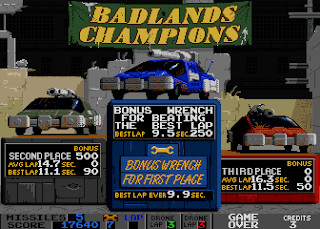 As mentioned in its review, Super Sprint was a pretty basic game, even for its time. Badlands, released three years after it, must therefore be considered even more so for its own time. Whilst it's true that it improves on its predecessor, graphically - each screen contains more objects and detail here, and there's a bigger variety in the appearance of the courses - the improvement is marginal considering how much graphics had improved in the intervening time, generally, and the fact that this game's colour pallette almost exlusively consists of various greys and browns means that, despite the technical improvement, Super Sprint is actually nicer to look at in my opinion! Sound is also improved - there's tunes here while you race as well as the mostly identical sound effects, but they're largely forgettable, unfortunately. Overall, like Super Sprint, this is a fun racing game, particularly in multi-player, but the dreary-looking visuals, loss of a player, and lack of any real innovation in the genre mean that you're probably better off sticking to the 3-player thrills of this game's unofficial prequel.