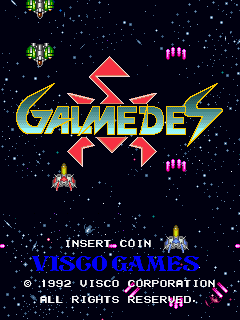 Despite my internet nickname I've never actually considered myself a 'king' of retro gaming, just an enthusiastic fan really. It's no secret here at Red Parsley, however, that shmups are probably my favourite, and certainly most frequently played genre, and I do know quite a bit about games of this type. It was therefore something of a surprise that, during one of my random game hunts, I discovered one that not only had I never played before but that I'd never even heard of! Eeek, whatever's going on?! Now that this embarrassing revelation has been shared with, potentially, the entire world, I shall of course henceforth seek to rectify the oversight at once. To that end, a brief search reveals the story to be a rather uninspiring one which involves a dictator with the decidedly unscary name of Gildy. 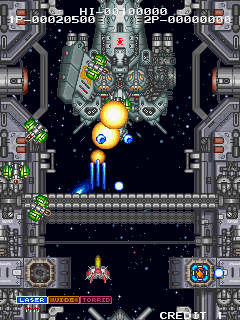 This maniacal oaf, who presumably does not look like Rita Hayworth, has become drunk with power and, apparently not content with ruling his own solar system, has decided to invade the neighbouring Galmedes system as well. In response, the occupants hastily created two powerful space fighters known as LEPTONs (Launched Electro-Projectile Thermal Osmotic Nullifier) which are to be steered by two brave pilots, called Foo and Bar, towards the invading forces, which are known as the 'Gastonians', incidentally. As handy as these LEPTON fighters may be, however, the odds are still firmly stacked against you as the interlopers have an extremely effective attack force consisting of hundreds of small fighters, many medium-sized warships, and of course a few large and rather formidable bosses. 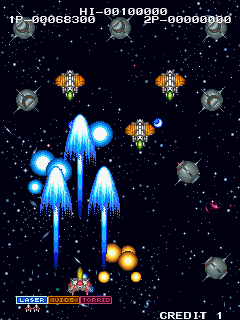 These forces are spread over four looong stages which are set in open space, over planets, and through orbital bases. All three are home to many enemy ships but the bases are also festooned with their own defences such as gun turrets. Your ships (which come in Raiden-style red for player one and blue for player two) predictably begin the game armed with a basic forward shot but this can quickly be upgraded. Certain enemy ships (usually the last one in an attack wave) and gun emplacements leave behind either speed-ups, medals (for bonus points at the end of the stage), or one of three weapons - Laser (blue icon) - very powerful but limited range, Wide (yellow) - fires in a spread pattern but isn't very powerful, or Torrid (red) - single forward shot but rear spread shot. Much to my delight, these weapons are all retained once collected and any can be selected at will. They can all be powered-up by collecting successive icons of the same colour and can even unleash powerful charge shots. Unfortunately, however, it's unlikely you'll ever see their highest power levels as Galmedes is one of the hardest shmups I've ever played, and there are several reasons for this. Firstly, there are a lot of enemy ships and they move quickly. Some fly straight at you, others floop around the screen in formations, but all of them are firing off lots of equally fast bullets and lasers as they move around. Most require more than a single hit too, and it's extremely rare that you can ever manage to destroy any of the idiots before they've fired off at least one volley of bullets. 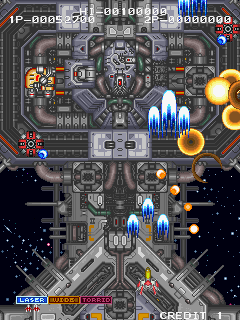 On top of that, the only weapon that has decent screen coverage is the yellow one but it's so devoid of power that it's pretty much useless, even powered-up. The one bright spot is that if you lose a life you'll carry on from the same point and only lose the weapon you were using but, unless you're a gamer blessed with ungodly skills, you'll have little choice but to stick with the blue weapon, and you'll probably never get it sufficiently powered-up either. Another problem is the graphics. Technically they're not too bad for the time and I like the style a lot - the star field backdrop and wibbly orange planet (gas giant?) are pleasant enough, the metallic bases look great and are packed with detail, and the sprites are also detailed and nicely drawn. The problem is the choice of some of the colours. 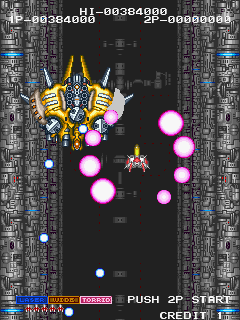 Aside from the explosions there are few bright or particularly contrasting colours used and, in the heat of the typically hectic battles found here, it's often difficult to see what's where. Many ships (including the player ones) and the mostly-pale-blue bullets are quite often lost against the usually-grey backgrounds; there were many occasions where I didn't even realise I'd been hit until the screen faded out to restart me! None of these problems are solely responsible for the high difficulty but, when combined, the result is arguably the hardest shmup I can remember. Ironically, when I did finally reach the second stage it was noticeably easier (until I reached the mid-boss), perhaps thanks to the not-always-grey background, and the yellow and red weapons were more useful, but it was still hardly a walk in the park! I didn't have the opportunity to play the game with a friend but I suspect it would be the same story. It's a shame as this could otherwise have been a decent vertical-scroller. The music and sound effects are pretty forgettable but, as mentioned, I like the graphics (confusing gameplay aside), the weapons-stockpiling is something I've missed since the Thunder Force games, the explosive action and large, bullet-spewing bosses are good, it's satisfying during the rare death-free periods, and the ending sequence even comes complete with some amusing 'Engrish', but finding out much of this stuff required about a billion emulator 'save states' so it seems only specially-genetically-engineered gamers will be skilful enough to get there without cheating.