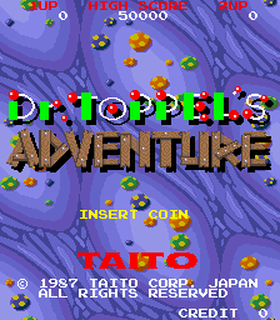 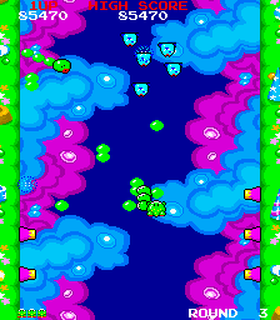 Presumably it's a waterway with special meaning to the good doctor but the stages leading to its safe liberation are heavily defended, with the occupying forces falling almost exclusively into one of two categories - many small things that swoop speedily around the screen in formation (I think they're insects of some sort), or wall-mounted bullet-spitters, usually guns or weird snakey creatures. Nearly all sections are walled to one extent or another too, so these usually feature as prominently as the flying enemies, sometimes even more so. Our well educated hero is able to fire (or spit?) single forward shots but most of the wall-mounted enemies take a good few shots to put down. 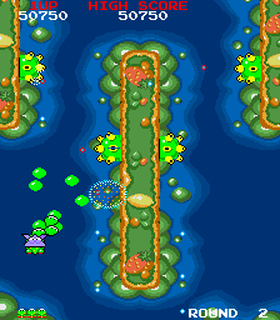 Fortunately, most of the faster-moving airborne irritants do fall to a single shot, and if you manage to take out a whole formation of them, you're rewarded with a pick-up. Many of these are money bags which just earn you points, but there's also a speed-up to look out for as well as small green drone devices. These things are bolted to the front of your ship by default, one after the other, increasing how many bullets you can fire at once, but you can also 'unlock' them at which point they'll follow your ship around like a Gradius option, except they'll fire in whichever direction they're facing. This means you can just wiggle around to shoot pretty much all around the screen if you have enough of them. 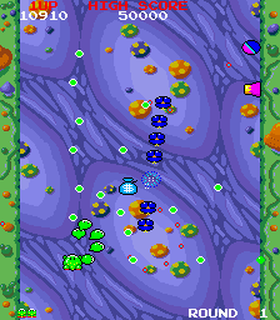 You can also, however, lock them in place at any time too, which obviously means you can configure them however you like, changing their deployment as the situation dictates. They can also absorb enemy bullets, although doing this also destroys them as they're living creatures themselves so it's probably a good idea not to waste them like this unless necessary, particularly as they're mighty useful against the few stronger enemies (including one whose lifeless head can be used as a shield upon defeat!) and pesky bosses. Having said that, most of the time you lose them it will be by accident. Indeed, Dr. Toppels environmental crusade is a challenging one to say the least. 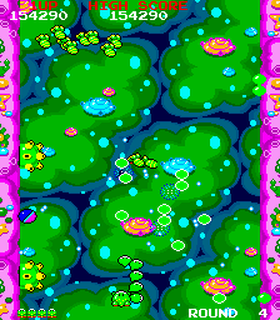 This is partly thanks to the teeny tiny enemy bullets which are large only in number and, despite being a bit twinkly, are often hard to see and even harder to avoid (without losing a drone/pod thing or two, at least), but it's also down to the pesky guns and stuff that line the walls. These things produce a sizeable percentage of shots and, as mentioned, many of them also take a good few well-aimed shots to destroy. It's often difficult enough taking care of this during the wide open sections that form the bulk of the game considering you're also contending with the nippy flying enemies but some sections later on force you to fly down narrow corridors and winding passages brimming with guns. 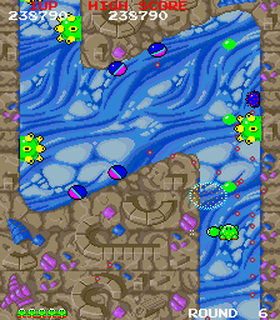 These sections, much like the one on the left here, are easily the hardest parts of the game, verging on the impossible at times (for non-superhuman gamers like... well, most of us). Even if you manage to survive them you'll almost certainly have no drone/pod things left for the boss fight which inevitably follows soon after them. Aside from these spikes in an already-high difficulty level though, Dr. Toppel's Adventure makes for a fairly interesting if not especially engrossing game. The graphics are mostly bright and colourful and the backgrounds are unusual, although most sprites are very small, even the bosses (for normal boss standards), and the audio consists of some nice, catchy music which perhaps sounds like the platformer I originally thought this was. A shmup it is though, and one whose difficulty belies its happy, cute appearance. It was the strange name that initially attracted me and the tiny colourful graphics that intrigued me upon playing it, as well as its weapon/power-up system, but it is the only weapon in the game (there aren't even any bombs) which, along with that punishing difficulty, means that interest in the game is likely to fade as quickly as it grew. A curious oddity then, but far from Taito's best.