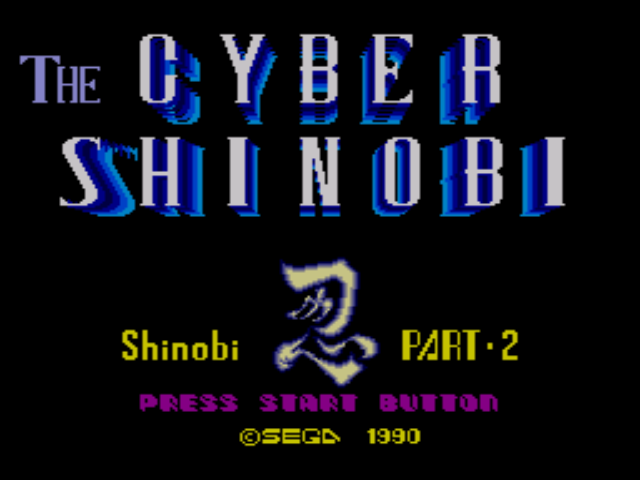 One of the numerous things that will certainly be familiar to fans of the first game, and indeed most other Shinobi games, is the bad guys. That's right, it's those pesky Zeed nincompoops again! Everyone thought they had been defeated by Joe Musashi of course, but in the year 2XXX a force of robots and men began attacking nuclear power plants all around the world, stealing plutonium with 100,000 megatons of explosive power, and leaving the words 'Cyber Zeed' at each of the crime scenes. Every country sent their best forces to put a stop to their terrorist activities but all were defeated. Then, in the world's darkest hour he appeared - Joe Musashi, grandson of the legend, vows to stop Cyber Zeed and their threat of raining nuclear fire upon the world.

There are six side-scrolling stages in all - Construction Site, Harbour, Field, Jungle, Waterfall, and Enemy Hideout - and each is predictably crawling with many irritating-but-familiar Zeed buffoons such as various coloured ninja, gun-toting goons (often hiding behind crates or something), and even a few jet-pack/astronaut dudes from the third stage onwards. Contact with some of them does no harm but getting caught by one of their attacks, be that a punch or kick, a weapon strike, or a shuriken/bullet, will always (and quickly) run down Joe's energy. The attacks at his disposal are fairly ninja-ish and reasonably effective but not very numerous. They include a sword swish from a standing position and a kick while squatting, both of which are rather short in range, so most of your brutal slayings will need to be up close and personal.

But that's not problem for a master of stealth, surely? He's got some help, too, in the form of some of the crates dotted around which can be kicked open. The resultant icons include ones to boost your life-meter and the power of your strikes, and also ones that furnish you with a limited number of shots (successive icons give shurikens, bullets, or grenades), or trusty ninjutsu magic which gets stronger the more you collect. There are also things like falling boulders and bullet-spitting totem poles to further sap your energy, and even the trusty disappearing floors make regular appearances here which typically result in instant death, and even more inconveniently, the offending sections drop without warning or any visible means of identifying them beforehand. And in a word (or noise), that means - grrrrr!

There are actually several things about Cyber Shinobi that will illicit similarly negative reactions from players. The first thing I noticed was the sluggish controls. They're functional enough without really offering any flashy moves - higher jumps are about the only remotely special ability - but getting Joe to do what you want, when you want can be a frustrating experience at times, especially considering he's a bit of a lumbering oaf and not very ninja-ish at all. This is made even worse by some fiddly commands too - for example, pressing 'attack' and 'jump' together will activate the magic, but I guarantee you'll do this by accident more often than on purpose, and to fire a 'shot' you press 'up' and 'attack' together, but only if you press them at exactly the same time.

Sadly, the problems don't end with Joe's limited range of motion and the poor controls - the audio and visuals are also substandard. There are almost no sound effects and the music, while pretty typical of the MS, is not very appealing at all. The graphics may not look too bad from the screenshots (apart from the stats panel taking up at least a third of the screen), and the first couple of stages aren't too bad, but there are some rather bland backgrounds, there's not much detail, movement is rarely smooth, and there's some of the laziest sprite graphics I've ever seen. Take these rocks (see below) for example - they, like several other larger sprites, were apparently drawn on non-transparent tiles which can very obviously be seen during play! This completely ruins any atmosphere the game may have built up and makes it seem like you're playing something half-finished! It really is quite ridiculous for a full-retail game.

There are also some problems with the pacing of the game. Stages are all timed and in many cases the screen only scrolls a short distance before stopping. You then need to defeat all the enemies that enter it before it will scroll some more. The first two stages make up well over half the game-time, though (despite a total of six stages!), while the third and fifth stages literally take a mere two or three minutes each to finish; the latter doesn't even feature any enemies besides the boss, it's little more than a bonus stage! Even the other stages only feature a combined total of five standard enemies and none of them have very interesting attack patterns. The bosses are probably even worse, consisting of a bulldozer, submarine, helicopter, bear, and other highly imaginative creations which are all easily defeated.

In fact, near enough every aspect of Cyber Shinobi seems very lazily made. Being so used to the very splendid 1987 original, it actually horrified me at first. However, in spite of the lazy design, unreliable controls, and dodgy collision detection, it did start to grow on me a little, after a while... but only until the end of the second stage, after which I was really struggling to keep playing. It's not too tough or anything - once you've learned where all the invisible traps are, at least - it's just not fun, and that's a real shame. Whilst hardly groundbreaking, the premise is sound enough - a futuristic Shinobi game featuring robot ninjas could've been great - and the MS is well suited to this kind of game (as the original showed), it just seems to me that Sega didn't even really try. I wasn't expecting much but this has still been a real disappointment. A blight on the good Shinobi name and surely the low-point of the series.