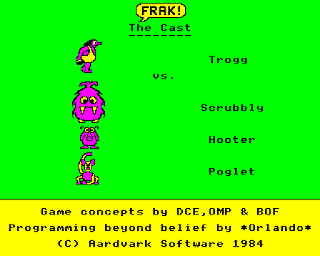 A little while back I took a look at the finest platform games with a prehistoric setting, and one that was up for consideration was Frak. That was until I realised it's not actually very prehistoric-ish at all. Besides starring a caveman called Trogg, there isn't much else that fits the necessary criteria. Trogg's job, you see, is to collect three keys on each of the three stages that make up the game. These consist of a few large and many smaller platforms which might look as though they've been arranged in a bit of a jumble, but they've actually been very deliberately placed to make it as tricky as possible to finish each stage by taking full advantage of Trogg's somewhat limited movement. He ambles around the screen slowly, jumps awkwardly, and can't fall more than about a nanometre without losing a life.

As you might imagine then, most of his lives are lost simply by missing a platform or jumping to the wrong one, but this isn't the only thing that make Frak a challenge. There are a number of enemies sprinkled throughout each stage - one type for each stage. These don't move or do anything but they are in the way. Generally more troublesome are the Balloons and Daggers. The former rise vertically and the latter arc across the screen from right to left, both appearing randomly, and contact with any of them costs a life, although these as well as the enemies can be taken out by Trogg's short-range yoyo attack (of all things). As if all that doesn't make the going hard enough, there's also a pretty strict time limit as well (2, 3, and 4 minutes for each stage respectively). Oddly though, you don't lose a life if you run out of time; instead, the background turns black!

I guess this is supposed to make it harder but everything you need to see is still visible so it seems a bit pointless really. Nonetheless, you can collect light bulbs to stave off the impending darkness, and there are also a few gems available for bonus points if you want to take the risk (some take a special effort to retrieve). It's at least worth learning the stage first though - it only takes the smallest mistake and you'll have to start again from scratch, and sadly it doesn't even take that sometimes thanks to some rather clunky, unresponsive controls. It's not game-killingly bad but it sure can be annoying! The aesthetics aren't wonderful either. The sprites and platforms are nice enough (especially those awesome Scrubblies) and there are catchy (if repetitive) tunes for each stage, but the colours are somewhat garish and there is frequently slowdown too.

This kind of stuff probably wouldn't be so noticeable if there was more to the game but with a mere three stages, pretty much every detail stands out. There has been an attempt to add some longevity - if you get through all stages (which shouldn't take too long since you have to do everything the same way each time), you'll return to the start, but this time the stages are upside down. Finish it again and they're turned 90°. And so on for several more loops, each with various visual tricks to differentiate them. It probably won't last you long then, but Frak is also an addictive game, and it has a lot of charm too, despite its more frustrating tendencies. It doesn't come close to dethroning Chuckie Egg as the BBC's premier platformer but it's different enough and appealing enough to stand alongside it... for a time. Just expect to be shouting 'Frak' rather often yourself too!

Gameplay Video: I've lost my ability to record these clips (hopefully temporarily) so here is someone else's fine effort at this tricky platformer...