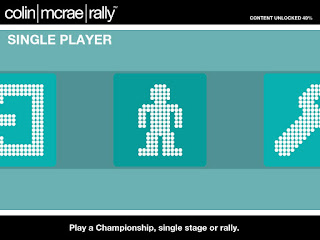 Since the age of the PS1, not only have driving games been far more prevalent but a sizeable portion of them have also been rally games. You might think the title that kick-started this was Sega Rally but as far as I'm concerned it was Colin McRae Rally. The series debuted in 1998 and was a more realistic take on the popular motorsport which in the years prior to the game's release had been dominated by Mr. McRae in his iconic blue Subaru Impreza. It was justifiably a smash hit and led to many sequels which gradually changed names to 'Dirt', presumably due to the tragic and untimely death of the star after whom the series was originally named. But now that original name returns. Does that mean we're in reboot territory? That's what I had assumed prior to playing it at least, but let's see. 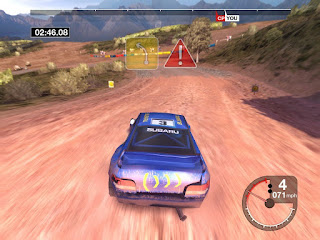 I can't even remember how/when I got it to be honest. I think it must have been part of a Humble Bundle or something, but anyway, there it was in my Steam library so I gave it a go and quickly found a rather different game to the one I was expecting. It's still a rally game of course, and one featuring a variety of courses winding through dusty and muddy countryside or along precarious mountainsides, but it's a much more basic game than we're used to these days. I took a break from playing it for a short while to investigate this and soon found the reason. It was released just a few years back which I knew, but what I didn't know was that it was originally a mobile phone game for Android and Apple devices and converted to PC afterwards, and it shows. It was a cheapie as a result but does that justify a lacklustre use of the McRae name? 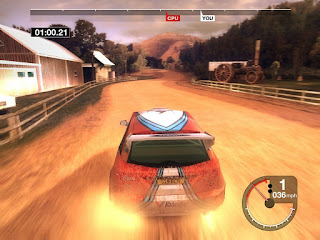 I guess the quality is the important part but there isn't too much to the game really. The options allow you to tinker with the controls and stuff and there is a random race option but apart from that it's just single rally or the championship mode. There are a mere four cars altogether - Ford Focus, Subaru Impreza, Mitsubishi Evo, Lancia Stratos - and only the Focus is available at the start. That's not too bad I guess, but what is bad is that there are only three countries to visit. Three! Admittedly there are a couple of rallies in each of them, each with several legs, but still, once you have conquered Australia, Greece, and Corsica, that's it. It shouldn't take too long to unlock the other cars (all three of them!) and once that's done, you'll have seen all there is to see here. But is it at least enjoyable up until that point? 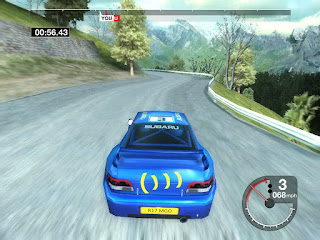 Well, first of all, let's compare it to the other McRae games. It's meant to be based on Colin McRae 2 for the PS1 but most aspects of that game are noticeably superior even though it was released 16 years earlier. It included far more courses and cars, for example, and the presentation was much better. As mentioned, things are rather basic here, with very little in the way of menus or info screens. Surprisingly, there's not even a multi-player mode. In-game is no better either. There are no replays, you cannot change or upgrade any of your car's settings/parts, and the controls are not even analogue. The graphics are rather disappointing too. It all probably looks nice from screenshots, especially with that cool speed-blurring effect, but upon closer inspection it's probably worse than CM2 overall, believe it or not. 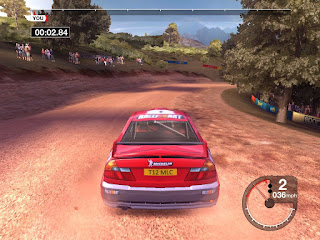 Yes, the resolution is higher here, the colours are brighter, and it all looks decent enough from afar, but the scenery and spectators aren't proper 3D, they're just cardboard cutouts, and the attention to detail when interacting with them is somewhat lacking too. Worse still is the 'cockpit' camera which is appallingly bad. There's no steering wheel or dashboard or anything, it just makes the lower third of the screen black! The sense of speed isn't great either and getting air can be a risky business thanks to the somewhat questionable physics - watch in bemusement as your car floats and twirls through the air! The cars themselves look pretty good though, and the damage modelling isn't bad. Damage is sustained easily too, and can definitely affect the car's performance, but you can only carry out repairs every two races. Ooof! 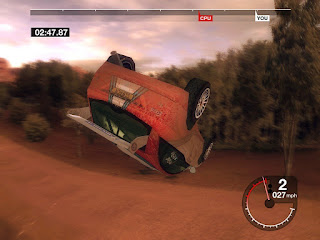 Even then you can only repair a certain amount, with a set number of 'blocks' available (representing time spent on the car) to repair the engine/transmission, bodywork, suspension, and wheels/tyres. Despite this, it's not a particularly hard game to finish. There are 16 cars in each rally and the progress bar at the top of the screen shows your car as well as 'CPU' which represents the fastest computer-controlled car, but you can carry on playing regardless of where you finish and it will all be over soon. You have to finish first to unlock the other cars of course, but still. Its origins as a mobile game means it's more suited to a quick bash now and then rather than more lengthy sessions anyway, but the worst part about it is that no real effort has been made to improve it here, it's just a cash-in plain and simple. 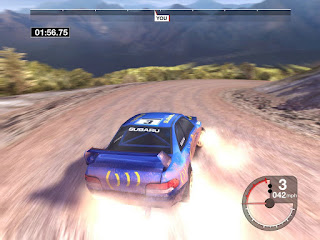 It's a shame too, as it could have been pretty decent, even if just as a more bare-bones, rather arcadey Colin McRae game. As it stands, the original PS1 releases are still better games and the more recent Dirt titles are streets ahead of it. There isn't even any rain, snow, or night rallies here, only dry, brightly lit gravel/dust and tarmac courses. In spite of all these many flaws, omissions, and disappointments however, I still had a fair bit of fun with it. The few courses that are here are enjoyable enough to drive around, even with the slightly sluggish controls and weird floaty physics, and I quite enjoyed the brief couple of hours they lasted me. It's not as exciting as the 'proper' games and there is far less here, but it should be remembered that it's much cheaper than them as well. It should've still been way better but, for the price...