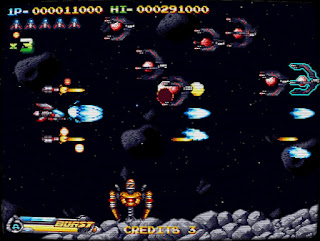 If there is one type of doujin game that's always guaranteed to grab my attention it's a side-scrolling shooter so you can imagine how pleased I was to stumble upon this one a while ago on Facebook. It's the work of three self-proclaimed arcade junkies from Italy known as Breaking Bytes and has recently been the subject of a Kickstarter campaign which I'm pleased to say was successful. The game is still under development but the alpha has been made freely available and does a great job of showcasing what they've included so far. In fact, it looks more or less finished to my eyes - the presentation is superb, featuring an intro sequence, lots of options, the choice of three pilots, three weapon set-ups, and even assist characters, and the whole thing is really polished already. It isn't quite finished yet though of course - only the first two stages are included here, and they are quite brief, but they're sufficiently splendid to make the game look very promising. 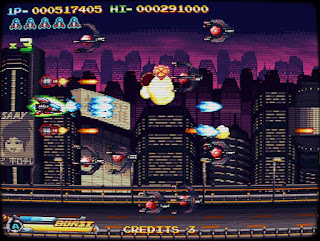 The guys were going for a Neo Geo look and the result is ace - flashy colourful weapon effects, detailed backdrops, big sprites, and lovely parallax greet your eyes while your ears are treated to a fantastic PCM soundtrack courtesy of famed composers, Shinji Hosoe and Keishi Yonao. Add to this some decent stage design (so far) and a really nice weapon/power-up system which offers the use of switchable options, powerful burst shots, and a shield as well as three different types of normal shot that you can switch between as you please, and we're left with what looks like being a cracking shooter and one of the best fan made examples to come along in a fair while. And that's without the promised features that we have yet to see such as the multiple paths through the stages and 'scavenge' system for upgrading your ship. Even the difficulty seems spot-on so far! It isn't released until October 2017 but I'm already looking forward to seeing more of this one.