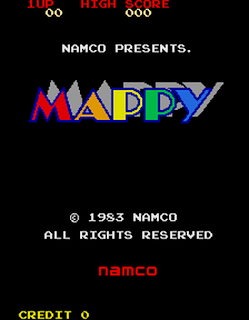 When you think of gaming mouses you might well think of Mickey's mighty fine adventures before any others, but coming long before he started lighting up the 8 and 16-bit consoles was a plucky fellow that went by the name of Mappy. Unlike his more famous Disney relative who just goes around doing as he pleases, Mappy is much more responsible and actually works as a police mouse, or 'micro police' as the game calls him! His job is to retrieve stolen property from a series of mansions, but there's a problem - the thieves are still there! They come in the form of pink cats called Meowkies (or 'naughty folks') and their boss, a larger red cat called Goro (or 'boss the big bit', whatever that means) and they are keen to keep hold of their loot, so Mappy's job will not be a very easy one. 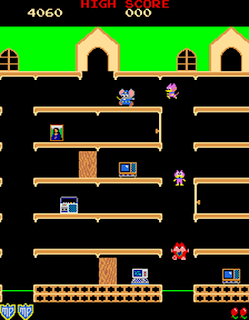 Each mansion has six floors but neither Mappy nor any of the cats can jump. Instead, they must make use of trampolines to get between floors. The stages are about three screens wide and there are generally four gaps for the trampolines which usually (but not always) allow access to any of the floors. Each one can only be used three times in succession before it breaks but it will recover its strength after a few seconds. Mappy cannot be harmed by the cats while using them either, it's only when he's walking along that they are dangerous, with any touch costing him one of his three lives. He has no way to take them out though, he can only avoid them, but he does have a little help with this as many platforms feature doors that only our heroic rodent can open or close. 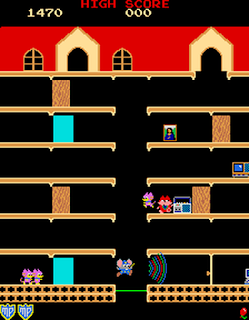 There are also some special 'microwave doors' here and there which, when opened, unleash a wave of deadly radiation that travels across the stage pushing back any pesky felines it comes into contact with, but that's about all the help you're going to get. Mostly it's just a case of making your way around the stages quickly while remaining watchful - not much is worse than seeing Meowkies approach you from both sides at once with nothing you can do! If you've got the skills, though, there are 16 unique stages to get through which then start repeating up to a maximum of a startling 256 stages. It's doubtful too many players will get anywhere near that far - it's gets tough quickly, mainly due to the Meokies becoming even faster than Mappy - but it's definitely addictive enough to keep you trying. You will probably spend as much time trying to avoid the enemies as you will collecting the valuables but control of Mappy is great and the scoring system (multipliers, bonus rounds) makes score-chasing good fun. The audio/visuals are quite good too. There is little variety but the characters are appealing and the main theme and little jingles are all mighty catchy as well. Unlike most of the early arcade classics, it's a game I didn't even become aware of until many years later, but I'm sure glad I've been able to play it now.

Gameplay Video: here's a video of the game being played by one of the talented fellows at Old Classic Retro Gaming (check out their great channel here). Oh, and don't watch if you want to avoid spoilers!