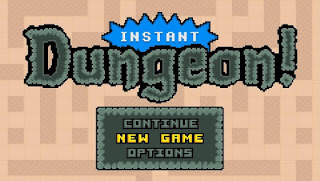 Like many of you I'm sure, I have amassed quite a large collection of games on Steam, Good Old Games, and similar services over the past few years, and also like many of you I suspect, I have yet to play most of them. It's about time I did though, and I figured that good old Red Parley gave me the perfect excuse as always. The first I have chosen is this, a cheapie purchase I saw on Steam which looked like one I might enjoy. This is mainly on account of it being an overhead-viewed maze game, a genre I generally find very appealing, and one that I was glad to find indie developers haven't forgotten about either. 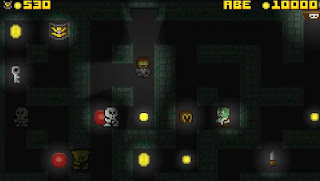 There's a surprisingly large number of play modes to try out, all with cookery-themed names for some reason: Practice Formula, Weak Sauce, Action Recipe, Adventure Mix, Rescue Relish, Dark Roast, Soul Succor, Boss Blend, and lastly Maxima Mash. All but the first two are of course locked to start with but they all play in a very similar way anyway, with just a few small changes to mix things up a little. Adventure Mix, for example, adds some very simple objectives to each stage (kill a certain type of enemy or collect certain items) while others are fairly self-explanatory anyway (practise, easy mode, boss rush etc). The hardest mode is probably Soul Succor which plunges you into near total darkness! 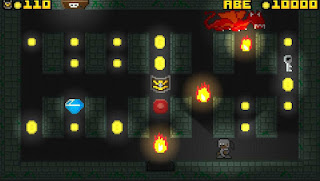 The basic gameplay is very simple regardless of which option you may choose though. The mazes are all generated randomly so the exact layouts are always different and they get larger and more complex the further into the game you get. Lord only knows how far in some players might be able to get too, as it goes on forever! Each stage has lots of stuff such as coins and gems for points, several types of weapons, both offensive and defensive, a key to unlock the exit, and lots of terrifying enemies which consist of mummies, goblins, zombies, vampires, werewolves, and creatures of that nature. Eeek! 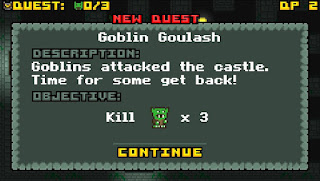 That's just the normal enemies but now and then you will encounter larger enemies too, like the scary dragon or skeleton snake shown in screenshots here, and there are six unique bosses spread through the game as well. These larger assailants should be avoided rather than attacked (just find the key, then the exit as normal) but the normal enemies can be defeated easily enough, falling to a single strike from one of the sixteen different attacks you can use. These range from knives and axes to pumpkin bombs and fiery magic spells but none count as standard equipment - they must be collected and each one is good for a single use only. Ooof! Better use them wisely then. 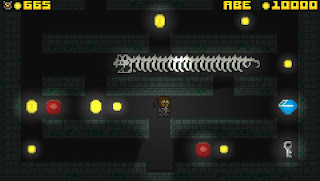 Something else that doesn't really help your quest is the dark murky nature of the dungeons, and they get progressively darker as well as larger the further into the game you get, making it ever easier to run straight into a scary ghoul or prowling werewolf. There are a few defensive items to keep you a little safer such as shields and helmets (both also only good for one use) and it's worth grabbing and keeping hold of lamps which can be used to illuminate a particular section. Coins and gems do this to a lesser extent too, so collecting them for maximum points will also make the stage progressively tougher. 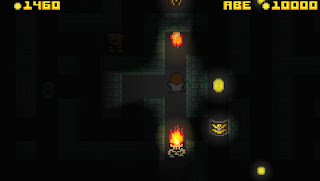 You only get the one life too, so if you make a mistake it's likely to be a rather costly one! It's not too bad though, and the game is a lot of fun to play. It can get a little repetitive - the 2D pixelly graphics are nice and the glowy lighting effects are great but it is the same style throughout, and likewise with the audio which consists of some ace spot effects like creaky doors and crackly fire sounds and the like, as well as a subtle background tune - but it's more the kind of game you'll play for five or ten minutes at a time anyway. With that in mind, and considering its ultra-cheap price (around £1 at time of writing), it's a fantastic little game which will prove more of a distraction than you might expect!