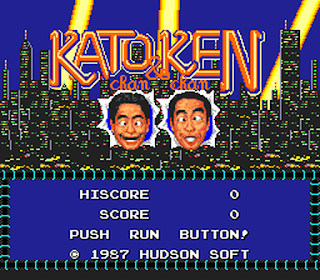 Or Kato-chan & Ken-chan to give the game its full name, but us oldie gamers here in the UK have always known it by its abbreviated name. Whatever name you know it by though, it was one of the Engine's very first releases, and for that reason it garnered a great deal of attention in its day. Was it worthy of it? I've always thought not but I hadn't spent a great deal of time playing it until this review to be honest, despite owning it for many years. Time to find out for sure, I guess! My first stop is finding out just what in the hell it's about. The answer to that, it seems, can be found in the TV show on which the game is apparently based, which was a Japanese variety show starring the two oafs of the title. Here, it seems they are on some sort of quest, but quite what it entails I couldn't say. The US version of the game (known as JJ & Jeff) casts the two characters as detectives investigating a kidnapping, so I suppose we should assume a similar kind of objective here. 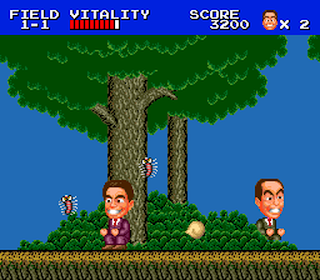 Well, whatever the buffoons are up to, it has resulted in a bizarre side-scrolling platform adventure, and one which has borrowed much from Wonder Boy, released the previous year. It's slightly smaller with just six levels (or 'fields') rather than Wonder Boy's seven, but they are again each divided into four stages or 'areas', the exit to the last of which is guarded by a boss. It also has a similar style of play; namely, that you get limited 'vitality' which is always falling, and contact from enemies and/or their detritus will of course accelerate that process. Collecting food-related items that appear around the screen as you run along will replenish it to one degree or another (depending on the particular item) but it will continue falling so a speedy pace is advisable! So far, so very familiar, but there are some differences here; notably, how Hudson have ignored all the innocent, child-friendly content found in Sega's game and instead filled their game with all manner of vulgarities and toilet humour! 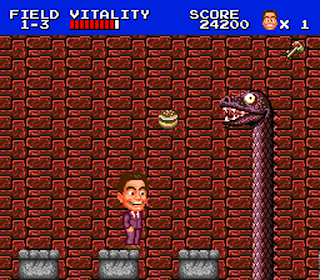 For a start you can choose which of the two characters you want to play as, although it doesn't really make a tremendous difference in my experience. Both of them move pretty quickly, have a moderate jumping ability, can perform a stiff kick, and can also squat down and pump out toxic trumps to their heart's content (must've had lots of wasabi the night before!). The character you don't play as will be spotted frequently throughout the game anyway though, usually peeing or pooping behind a bush or something. Isn't that delightful? Sometimes they will stand around throwing stuff at you too, which isn't particularly helpful, while the enemy contingent proper is a mixture of small animals (bugs, moles, birds who poop on your head, etc) and what seems to be government agents or detectives or something. All of these troublesome oafs can be taken out in the same way though - either by using a well aimed kick, a gaseous pump, or by good old fashioned head-jumping. 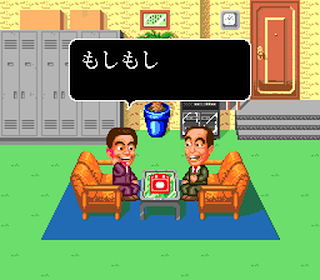 The stages themselves contain as many hazards as well. In addition to the usual bottomless chasms of doom which spell instant death if you should fall off a platform, there are small fires which are similarly fatal, and what look like rocks (or they could be big piles of poop knowing this game), though these at least only cause damage rather than death. Help comes in the form of public toilets, inside which reside strangely-costumed healers who will refill your vitality in full, and there are also tons of bonuses hidden all over the place, usually found by kicking something (such as lampposts or water fountains). You may also find the odd bonus round too. One of them sees you running across cloud platforms collecting bonuses, for example, while another gives you the chance to gamble any gold coins you've collected on a slot machine. Everyone knows gambling is for chumps, but even with the (minimal) help you get, it is a very tricky game for numerous reasons. 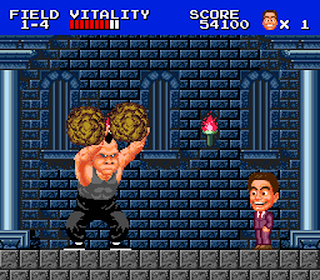 One of the main ones, I found, is down to the graphics. They aren't bad for such an early Engine game, with some amusing expressions on the human characters, but the 'camera' is quite zoomed in so you often get very little warning of any upcoming hazards. Unless you edge forward an inch as a time but that's not much fun, and you can't take too long as your vatality will run out. This doesn't happen as quickly as with Wonder Boy but it will still happen if you dawdle too much. Another problem I found is the attack options on offer. The kick is super-short-range meaning it's easy to take damage while delivering it, and the bottom blast takes too long to perform in most cases. That leaves the head-jump which obviously only works on enemies that are low enough to jump on, but the characters move so quickly that even with pretty accurate controls, it's fairly easy to miss, and I often do. The controls actually seem a little too sensitive to me sometimes. 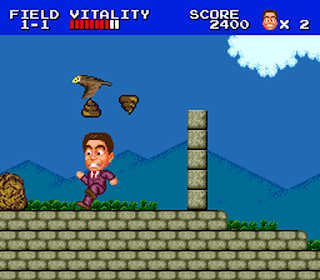 There are certainly some things to like as well though. Presentation is quite good including a few cut-scenes (with Japanese dialogue in this version), and the music is upbeat and catchy. It's also a very lively, fast-paced game to play as you might expect. Then there's the comedic sides of things which, if you're a fan of toilet humour, you will find highly appealing. Overall, though, for all its peculiar ways and unique content, Chan & Chan is very much just a weirder, more vulgar version of Wonder Boy as far as I can tell, only with poorer stage design, and accordingly it's not as enjoyable to play. It's shortcomings would be easier to overlook if there was a bit more variety but as it stands it's not really one I would recommend too highly. I imagine any British gamers who grew up seeing the exciting new PC Engine console in C&VG magazine will have a lot of affection for it as I do, but it was bettered quite considerably in the years that followed. Not bad but not great either.