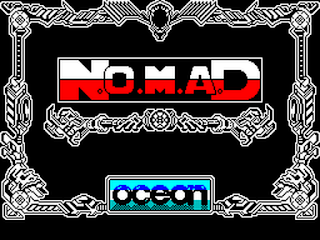 It seems like a loong time ago now that I spent most of my evenings in front of my trusty Spectrum. In retrospect, they probably would've been better spent doing homework but never mind! One of the first of its games to ensnare me, and one of the very first video games to ever do so therefore, was this one which was actually a freebie that came bundled with the computer. It's a flick-screen multi-directional shooter set within TALOS, a man-made asteroid which is apparently 'spreading evil through the universe' thanks to its chief occupant, the 'unspeakably vile' Cyrus T.Gross. To combat this terror, the 'rulers of the Free Worlds' have sent in N.O.M.A.D. (Nemesis Organisation Mobile Attack Droid), a floaty shooty robot to blow everything up and kill him. I guess we're ignoring whatever judicial system is used in this part of space for now then, so let's get killing! 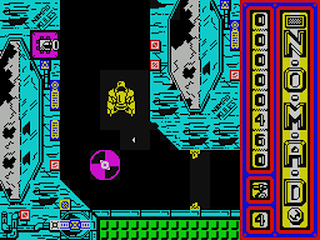 There are apparently four sections that make up the asteroid - the spaceport, slums, city centre, and HQ, although it seems more like only three distinct areas to me. Either way, the game consists of around 90-ish screens of corridors and rooms filled with many evil defences. Guiding Nomad through them isn't too complicated - he can thrust forwards or backwards, rotate freely, and is equipped with 'two magnum 57 calibre blasters'. This probably sounds impressive but they're actually rather feeble pea-shooters. Fortunately they are sufficient for what lays ahead (just about). The defences come in four types - twirly magenta things that fire off sparks at random angles, cannons embedded in the walls that shoot what look like diamonds, weird square things that fire squiggly homing missiles, and scary spinning attack droids called 'Robothugs' which appear as if from thin air and go mental. 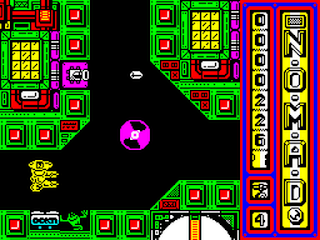 As mentioned, it seems to me that there are three main sections to the game. The middle (the green section) is a large mazey area with multiple routes through it, and either side of it are much more linear corridor sections (a red/blue one at the start and a yellow one at the end). Every now and then you'll encounter a switch which unlocks a gate at some other location and there are also some rooms with magnetic walls (which are a real pain), but they are about the only features other than the defences. It's not a complicated game but it is quite tough, and there are two main reasons for this. First, control of Nomad is rather imprecise and mighty sluggish. If you try and charge through screens, even ones that have been previously cleared, you'll often find yourself going the wrong way as the bumbling droid bounces off walls and ends up lord knows where, and if you try to take things more slowly you'll find that he often gets stuck on walls, so you can't really win! 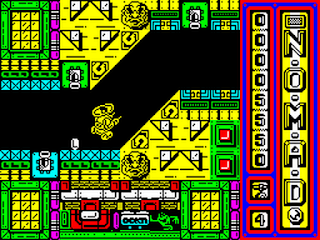 The other thing that makes things a bit tough is the rather cheap placement of some of the defences like guns right at the entry-point of some screens. Grrr! Still, I guess that kind of thing wasn't exactly unheard of in those days and I did enjoy playing it a lot in my youth. The graphics are certainly colourful and the lure of seeing what's on the next screen kept me plugging away (with my sister helping now and then). Playing it again now isn't so great I must admit - those controls and cheap deaths proved mighty frustrating, but still I persevered, hoping to see the end of the game, for old time's sake if nothing else. And I succeeded, finally, all those years after starting it! I did quite enjoy chugging around its corridors too. It's not innovative or varied, there is little depth, and it's pretty unfair, but it has a certain style (including a cool 128k tune) and I still have a lot of affection for it. Thanks for the memories, Nomad!

Gameplay Video: here's a video of the whole game being played by one of the talented fellows at RZX Archives (check out their great channel here). Oh, and don't watch if you want to avoid spoilers!