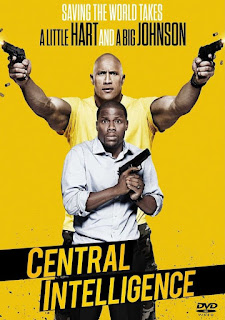 Tagline: "Saving the world takes a little Hart and a big Johnson"

You know, I don't think there is any actor I have heard more about in the last couple of years than Kevin Hart. Some people seem to love him, some seem to hate him, but however you feel about him he certainly seems to be cropping up rather a lot lately. Personally, until very recently I had never (knowingly) seen one of his films so my judgement was reserved for the time being. I am, however, something of a fan of Dwayne 'The Rock' Johnson so I figured this recent release would be the perfect film with which to break my Hart duck. It starts off with their final high school senior assembly - Calvin 'Golden Jet' Joyner (Hart) is the star pupil - super popular, winner of just about everything, and voted 'most likely to succeed' by his classmates; Robbie Wheirdicht (Johnson) is... well, the opposite - an awkward, overweight, lonely loser. 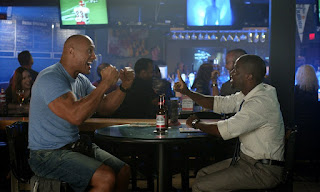 Fast forward 20 years though, and things have changed somewhat. Calvin is successful by any normal person's standards - he has a good job as a forensic accountant and a great house with his high-school sweetheart girlfriend (now wife), but he is dissatisfied with how his life has gone. One day - the same day his wife Maggie (Nicolet) asks him to go to marriage counselling no less - Robbie, who's now known as 'Bob Stone', makes contact via Facebook and arranges to meet Calvin for drinks. Much to his surprise Bob is now lean, muscular, and confident - a far cry from how he was in high school - and also very enthusiastic about seeing his 'best friend' after so long. After an interesting evening, however, Calvin is approached by the CIA who are looking for Bob who they say is a dangerous rogue agent. Ooof! 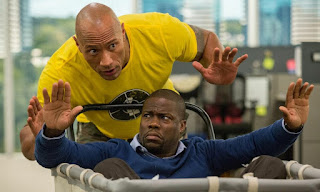 Whether he actually has gone bad or not is something neither we nor Calvin know for sure - both sides make good cases - but the result is Bob going on the run, apparently to stop the real bad guy known as 'the Black Badger' who is allegedly trying to sell secret satellite codes to the highest bidder. He drags an unwilling Calvin with him due to his accounting talents, but the real reason is of course simply so they can engage in various humorous japes together while being pursued by Agent Pamela Harris (Ryan) and her team. Much of this comes from Calvin's perpetual panic/terror as fists and bullets fly around him, with Kevin Hart's comedic style being immediately familiar to newcomers like me. There have been lots of fast-talking loudmouths over the years after all, but he seems as good as most of his predecessors. 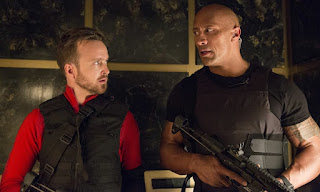 Perhaps a little more surprising was The Rock. We know from back in his WWE days that he's a comedic talent and he's just as funny here as Hart, albeit in a different way, but this is probably his best acting performance to date as well. Their support is decent enough too, though somewhat anonymous next to the two stars, and there's also plenty of action - explosions, gun fights, car crashes, etc - but it's the 'buddy' dynamic between the two main men that appeals the most. They have good chemistry together and deliver enough laughs to make you forget about the nonsensical story. If you already dislike either of them I doubt this film will change your mind but everyone else should have a great time. It's all very silly, obviously, but in a good way - it's funny as hell and even has a nice message.