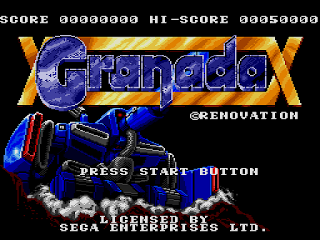 The MegaDrive is justifiably famed the world over for its ultra-splendid selection of shooters but most of these are of the usual horizontal and vertical scrolling varieties. One game that bucked that trend by offering more ground-based, free-roaming action was Granada (not 'XGranadaX' as it's often called, understandably). It wasn't a well known game over here in the UK, largely on account of the fact that it wasn't released here, but it was a game that intrigued me enough to seek it out at my friendly local import emporium, and I had a lot of fun with it. And how could I not? After all, we're not just in control of a mere tank here but a 'Hyper Cannon Tank' brimming with advanced weaponry which you must guide through some sort of unspecified battle being waged on 'the peaceful streets of Tobora' (though maybe not right now) where you'll face 'the giant flying battleship Astarsha' as well as Valsic, another HCT. 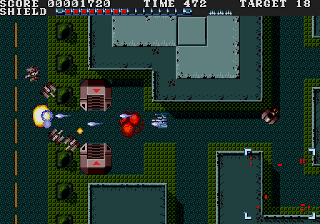 Funnily enough, the game is set in 2016 too. Who would've thought I'd be reviewing this game 25 years after its release and in the year it's story takes place? Good gracious me! Hmmm, anyway, there are nine stages to guide your HCT through. Each is viewed from overhead and takes the form of an enclosed arena of one type or another. In the bottom-right corner of the screen is a scanner/radar gadget thingy which doesn't work as a map as such - it doesn't show the actual layout of the stages - but it does feature a number of red dots. These are all enemy targets and must be destroyed before that stage's boss will deem you sufficiently troublesome to grace you with his presence. Take out this bunghole as well and it's on to the next stage to do the same again. Unfortunately though, the radar doesn't show all enemies, only the main targets, so you'll be kept on your toes! 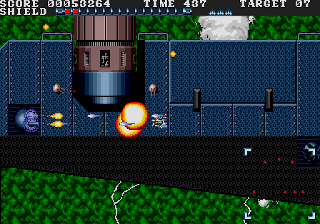 Most of the defences come in the form of gun turrets which come in a variety of shapes and sizes, and other tanks similar to your own in size but weedier (at first anyway). Many of these pesky things come from what are basically Gauntlet-style generators. In other words, if you don't destroy the hatchways from which they emerge, they will keep on coming. Naturally, there are also some less common larger enemies which take a little more effort to put down. You have two means of doing this - a rapid-fire cannon and a more powerful but far less rapid-fire blaster, both of which offer unlimited ammo. There are also five different (though similar) 'support units' which are collectable drone-like things that orbit Granada (your HCT) or combine with it, shielding it from enemy shots, firing their own shots, and stuff like that. That, however, is all the help you get. 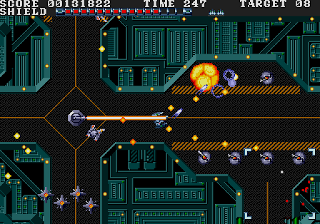 You might think that makes this a rather tough game, and at first I did indeed think that, but after a bit more time playing it I found one little function that made the going so much easier - a 'lock' button. Prior to this it was tricky avoiding enemy fire while also trying to unleash my own fiery fury - moving around also changes your direction of fire after all - but locking your cannon resolves this issue by keeping it constant for as long as you hold the relevant button. This kind of thing has featured in other games over the years but I don't think it's ever been more helpful than it is here. So much so, in fact, that I went from barely being able to finish the first stage to being able to without even losing energy! This turned out to be even more valuable when I discovered that there's nothing to refill your energy-meter here either. It isn't even replenished when you finish a stage! 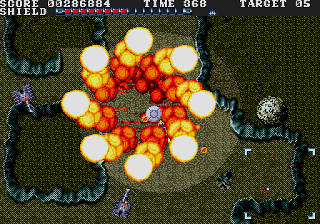 Granada isn't as tough as I initially thought then, but it's still far from a walk in the park and requires careful play - charging around with all guns blazing here isn't likely to pay off. There is a time limit as well though, so you can't take too long either. The size of the stages varies a little - the first is roughly five-by-five screens, for example - but generally you can move around their scrolling landscapes as you please. The enemies are lurking all around and you can't shoot some of them straight away such as the damn things on the fourth stage that rain shots down on you from above. The stages are pretty varied too. The first is set on the streets of Tobora while others take in numerous alien landscapes and installations. One is even set on the back of a giant aircraft in mid-flight! Some of them are rather maze-like while others are more open but they all offer their own challenges. 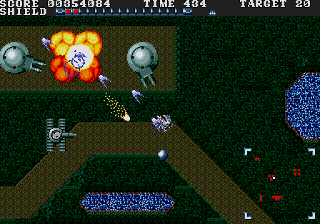 The graphics are a bit hit and miss for me. The sprites and scenery all look really nice but the colours are a bit dull for the most part, and there is some slow-down when things get busy too. It's a decent enough looking game overall though, and the sound is good too, featuring lots of arcadey effects and decent background tunes to keep you company as you trundle about the arenas in your small and surprisingly nippy tank laying waste to everything in your path. It's great fun doing so as well. It has been a while since I played Granada but it took no time at all to get back into the swing of things. I think I actually got further this time than ever before, which was nice as it's one of those games that is satisfying to do well at. Completing it will be a tall order for most players but the controls are spot-on and the stage design is mostly great so you'll want to keep trying. 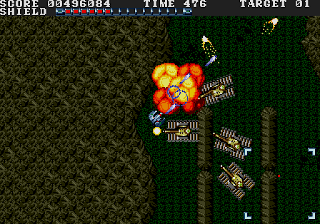 I think it's the varied stages that most keeps me coming back. They probably don't look hugely different in the screenshots, and I suppose they aren't really, but each one is home to its own features and their layouts make very good use of the space in each arena. It might've been cool if there were a few more secret areas hidden around them, and a few more collectables such as energy top-ups, and some new weapons wouldn't hurt either, but the stages all play just differently enough to keep things interesting and leave you keen to see what's on the next one. Stuff like this, combined with the audio/visual style, gives it a good atmosphere, but perhaps the best thing about Granada is its originality - I haven't played many games like it on any system never mind just on the MD so it would probably be worth a try even if it wasn't much cop. Happily, it is, and is one of the MD's real hidden gems.