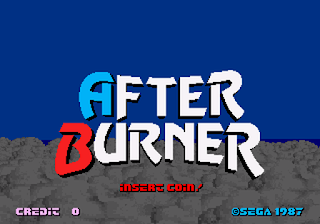 Games such as Hang On and Space Harrier were big hits for Sega and helped cement their reputation as purveyors of technically impressive arcade games that were also great fun to play, but few games would ever equal the impact that OutRun had. It is still fondly remembered today as one of the true greats but in the mid-80's it was simply jaw-dropping, so the game Sega followed it up with would have to be truly spectacular. It came just over a year later and saw players leave the tarmac behind and return to the skies. This time, however, they weren't colourful skies filled with peculiar alien creatures but were our own skies here on earth. That game was of course After Burner and it would go on to huge success itself. Some players, perhaps improbably, even preferred it to its predecessor. 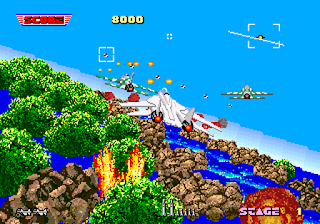 A big part of the reason for this was almost certainly its similarity to a certain Tom Cruise-starring action film released the previous year which was more than a little popular. How many of its young fans would pass up the opportunity presented by Sega's game to pretend they were Maverick or one of his daredevil wingmen, zooming through the skies, dodging missiles and taking down dozens of pesky Commies? Indeed, Yu Suzuki has openly admitted that, while it may not have fuelled the original idea, the success of Top Gun was certainly an influence on his new game. Games were often inspired by movies back than though, as I suppose they still are today, and Suzuki-san still had a lot of work to do before his new game could be a hit too. The first stop was that much-celebrated hardware. 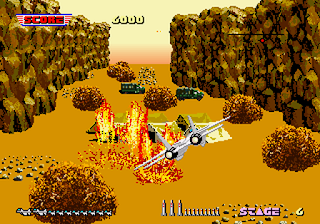 After Burner was the first game to use Sega's sparkling new X-Board which came armed with the latest incarnation of their amazing Super Scaler chipset. This enabled them to throw more at the player than ever before, and faster than ever before too, and the game looked glorious as a result. There were 18 stages in total, each home to its own colourful landscape, from the open seas that first greeted you upon taking off from the now-legendary Sega Enterprises carrier to lush rolling meadows, tropical beaches, snow-covered woods, dense jungles, and even canyons with sheer rock-faces either side. Flying over these were various kinds of fighter jets, some sporting camouflage livery, harrier jumpjets, and helicopter gunships, all of whom filled the screen with dozens of missiles whose smoke trails zig-zagged the skies and whose explosions littered the landscape. Some even chased you from behind, shooting at you or sending missiles your way. 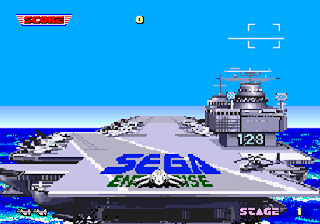 Attempting to take all of these bogies down was you in your iconic F-14 Tomcat jet fighter which had two means of doing this - a rapid fire vulcan cannon, which had unlimited ammo, and heat-seeking missiles, which did not. It was a reasonably manoeuvrable craft considering its supersonic forward velocity, and much movement was required to dodge the incoming barrages of missiles which were relentless. Luckily you couldn't crash into the ground! Of course, one of the big selling points of After Burner was the sizeable hydraulic cabinet that housed it in many arcades which, unlike Space Harrier and OutRun's already-superb equivalents, actually tilted you forwards and backwards as well as left and right in its mock fighter cockpit. Well, I say 'tilted' but it certainly felt more forceful than that while playing. Indeed, gamers of a frailer persuasion were probably better off sticking to the stand-up version! 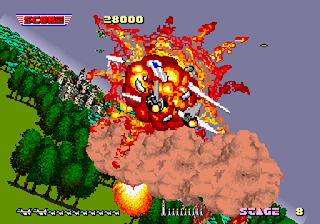 For most of us, though, this lively jolting around was quite a thrill and was a major part of what made the game so appealing. It certainly did much to help reinforce any Top Gun fantasies we might've had! The flip-side of this, however, was that the game naturally lost much of its appeal when played at home. Some of the conversions were pretty good - I spent quite a bit of time with the ace Master System version - but it wasn't the same, obviously. This could also be said of the previous Super Scaler games but the increased movements of After Burner's housing made it even more noticeable. Happily, it was a fairly common machine in the arcades of the time - how many operators would be foolish enough not to bring one in? That is after all where games like this belong, is it not? 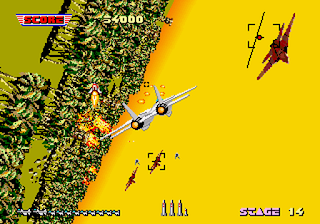 It wasn't just those fancy scaling graphics, colourful locales, and bone-shaking hydraulics that made OutRun such a hit though, it was the atmosphere it created as well, and a big part of this was down to its loud, iconic, and absolutely glorious music. This was one area I at least was sure After Burner couldn't match its forebear, and I was right, but not by as much as expected. You don't get to choose any of the synth-rock choons on offer this time, but that means you get several to enjoy during the same session as they change periodically, assuming you survive long enough. Unsurprisingly, the relaxing summery soundtrack is replaced here with more upbeat tracks that evoke a greater sense of urgency and danger, and they are quite superb. My personal favourite is 'Red Out' but, like OutRun and Space Harrier, it's a soundtrack that more than stands up today. 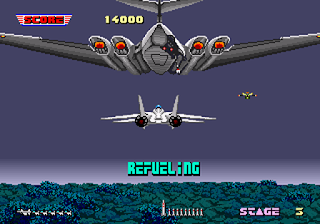 So, After Burner had it everywhere that counted really then. It looked great, it sounded great, and it was thrilling to play, even when you didn't have the panic of an enemy chasing you down. Everything moved quicker than ever before, or at least seemed to due to the game's more hectic nature, and stages took place at various times of day too, so we were treated to some nice battles at sunset and dusk. The enduring memory many have of After Burner from a visual point of view, though, was of its crazy 'barrel roll' feature which could make queasier gamers lose their lunch. This certainly looks flashy to an audience but it's very useful for dodging missiles too, and soon becomes an essential part of the game. Still to this day, few arcade games have ever been quite as exciting to play. I was actually a little nervous before climbing into the mock-cockpit for the first time! 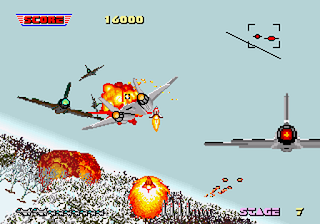 Of course, there wasn't really that much to the game once you got used to its extravagance. Aside from a mid-air refuelling break to catch your breathe every three stages and two scary canyon runs, it's the same thing all the way through - hold down the trigger, frantically weave left and right pressing the missile button every time you hear 'lock', and hoping to last as long as possible (although your lives are lost amidst some impressive explosions!), but most games of the day were simple, or most arcade games at least, and few left you with quite the impression that After Burner did. Even today it offers an experience that few games can match, not even its own sequels such as G-Loc or After Burner Climax (although the former did come in an even more puke-inducing 'cabinet' that rotated through 360 degrees!). I mean, they're good for the most part, but they're not quite original After Burner good. 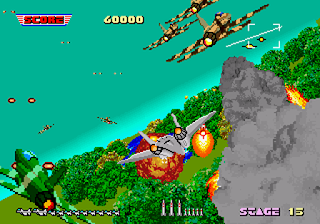 The only game that was that good really, was After Burner II which was essentially the same game but with a couple of bells and whistles added. I'll take a look at those accoutrements in a separate post but there really is little difference between the games. As mentioned, while perfectly enjoyable in short bursts, they do lose a lot from the transition to home systems, but this is a review of the original arcade version, and that was very enjoyable. It's almost a ride rather than a mere game and if you're old like me and spent time getting hurled around by the machine in your youth, or if you're lucky enough to have access to a machine now, the original After Burner experience is just that - a gaming experience that everyone gamer should sample at least once in their lives.

Gameplay Video: here's a video of the whole game being played by the talented Retro Hawk (check out his great channel here). Oh, and don't watch if you want to avoid spoilers!