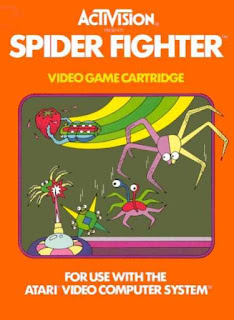 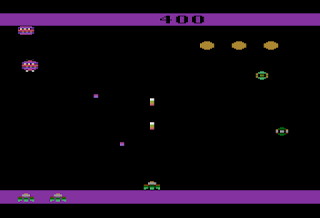 These heinous abominations come in the form of Green Widows which look like spaceships but must be spiders judging by their name, and Stingers which appear to be the spiders of the title (and cover). Producing both of these horrors are Master Nests which also spew out Spy Pods. These things scout around instructing the Master Nests when to release more bugs making them a clear choice as your primary targets, leaving the Master Nests until last as shooting these enrages any remaining creepy-crawlies, turning them into much faster Stingers. It's probably best not to leave the Master Nests to their own devices for too long though, as they will snatch your fruits and make off with them if you're not careful. Lose all three fruits and you'll lose a life. 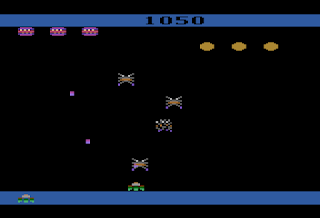 Take down all of the Master Nests, however, and you'll finish the wave in question, with successive waves featuring more and more numerous bugs. All fours types of the spindly hellions take pot-shots at you too, all they have their own movements and behaviour, so the going can get tricky quickly, especially if you turn off the guided bullets! There isn't much variety in the graphics or gameplay, but what is here is great. The fast, erratic bugs look cool and their buzzing around will definitely keep you on your toes. They zip all over the place, backward and forwards, often coming down very low, and it's great fun trying to outsmart them and seeing how long you can last. I had more than a few tries too, it's a cracking little game that's hard to put down once you start. I'm not sure how I missed it before but I'm sure glad I've played it now.