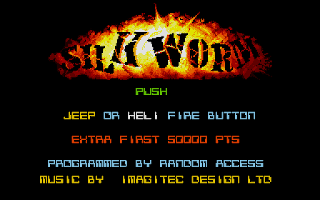 Okay, so technically this one isn't really a computer shmup as it was actually an arcade game originally, and also appeared on console owing to an apparently-not-well-known NES conversion. However, in my experience it's far more well known, in the UK at least, for its home computer conversions, both 8-bit and 16-bit versions alike. I enjoyed a decent (if rather slow) version on my trusty Speccy but even then I couldn't help but cast the odd envious glance or two in the direction of the colourful Atari ST and Amiga versions fuelled by their 16-bit power. I guess I got distracted by other splendid games though, as when I finally had the chance to own/play one of them, I never got around to it, and to this day I've still not played it on either machine. Time for Red Parsley to rectify another oversight! 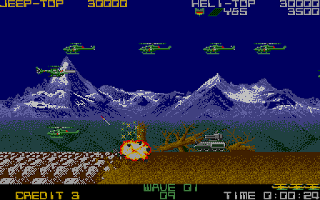 It's a horizontal scroller and was at the time probably most famous for its uncommon simultaneous two-player mode which saw player one in control of a chopper and player two making use of a jeep. In one player mode you can choose either of them but whichever one you go for you've got a slightly unusual eleven stages (or 'waves') of 'One Continent Alliance' military kit to get through, who despite a fairly friendly name are apparently staging a coup. Their attempts to do this involve the ultra scientific method of throwing near enough infinity choppers, planes and tanks at you. Luckily, the vehicles to which you have access are 'advanced prototypes' which should help you put down their idiotic attack. Having spent some time using both craft, however, I'm not really sure what's so 'advanced' about them. 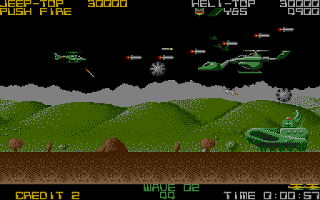 Both move around as you would expect - the chopper obviously enjoys much more freedom but the jeep can at least jump - and they each have only basic armaments available. The chopper has rockets which fire directly ahead as well as downwards at a 45 degrees while the jeep has a movable turret, and both are decent enough at taking out the masses of enemies that come at you mostly head-on (but some sneak up on you from behind now and then too). Each stage also has a mid-boss, which kind of resembles a cross between a chopper and a serpent (see above) as well as an end-boss which alternates between a large chopper and a large tank which hover/trundle about a bit while firing off missiles aplenty on your direction. 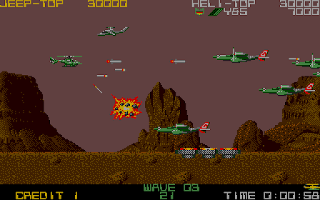 When you take down the mid-boss (which arrives in sections and only attacks once it has amalgamated into its fearsome whole), your forward cannon is upgraded to fire two rockets simultaneously, but this is the extent of your offensive abilities. However, in addition to the moving enemies there are also ground-based gun emplacements and even missile silos, and one particular object leaves behind a sparkly star thing when shot. This can itself be shot to produce a smart bomb-like effect, which is handy if the screen is rather crowded, but it can also be collected to provide a temporary shield for your vehicle of choice, but the fact that there are lots of them on every stage can end up making Silkworm a little easy to finish. Well, using the chopper at least - the jeep is kind of like a 'hard' difficulty mode. 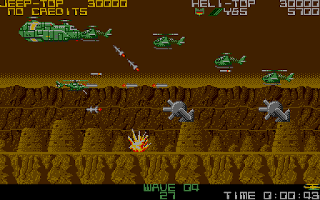 It's also rather lacking in variety as well. There are only a handful of different enemy craft, for example, and there's no in-game music to keep you company either. There's a title screen tune though, which is great, and the effects are good too. Some backgrounds are a bit dull but there are a few nice ones in between including a cool stormy night stage with lightning, although sadly there's no snowy stage like I was hoping. Despite probably sounding like a bit of a hit and miss game though, I actually enjoyed it quite a bit. The tried and trusted military theme works well and the fast-paced action is mighty good fun. Near-infinite shields aside, the difficulty is well paced, the controls are responsive and, importantly, the ultra-explodey action is satisfying. A nice conversion and a decent blaster in its own right.