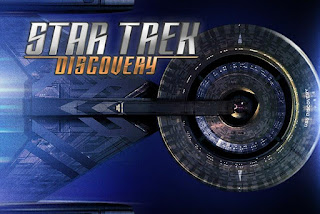 It sure is a good time to be a sci-fi fan at the moment - no sooner do we get an all-new Star Trek-style show to investigate in the shape of The Orville, but mere weeks later we get a brand new actual Star Trek show as well! Discovery had seen much controversy prior to its premiere this past Sunday though, mainly due to distributor CBS's decision to broadcast it exclusively on their subscription streaming channel in the show's native U.S. while the rest of us get it on Netflix (tee hee!), but many fans had also determined from press releases or trailers that they didn't like some aspect of the show, dismissed it as 'shit', and vowed never to watch it. I can't remember any show getting so much sheer, irrational hate (and unlike most people these days I don't use that word lightly either) before even reaching our screens but happily for me I'm not stupid (well, not that stupid) and have therefore been eagerly awaiting it! 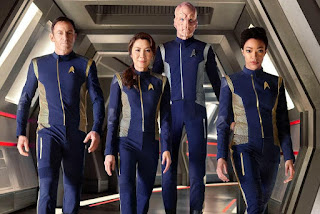 Much like the equally derided films of recent years, Discovery is a prequel and takes place about 10 years before the original series. I actually join the whining 'fans' to a degree on this point as the setting surely limits the races and tech that can be used? Like many, I would've preferred a post-Voyager show but I guess being a prequel didn't stop Enterprise oafing around with new races or ones we weren't supposed to see so soon, and it's not a major issue anyway. The show will also be set aboard a new starship, namely the titular USS Discovery, and will focus mainly on the Federation's volatile relationship with the Klingons who have once again made their presence known after nearly a century of self-imposed silence and isolation. The question is, what do the grunting pasty-heads have in mind? Whatever it is, it doesn't look good.

The show's premiere gave us the first two episodes at once and, at time of writing, that's all we've had so far. Curiously, the Discovery itself is nowhere to be found in them and we're instead introduced to the main characters aboard the USS Shenzhou, commanded by Captain Philippa Georgiou (Michelle Yeoh). Unusually though, the series lead will be her first officer, Commander Michael Burnham, who was taken in by Sarek and raised as a Vulcan which, yes, makes her Spock's sister (or surrogate sister at least). The first two episodes, which are basically one two-parter, see the Shenzhou sent to the outermost edge of Federation space to repair a damaged satellite where they also discover what looks to be an ancient craft of some sort lurking in an asteroid field. A closer inspection by Burnham reveals a Klingon insignia... 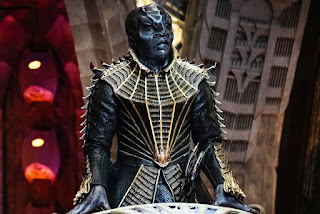 The latest redesign of this mighty warrior race has unsurprisingly been yet another point many of the fans have savaged but there's plenty of opportunity to give them the once over as the episodes are pretty Klingon-heavy, and with lots of spoken Klingon too. Future episodes will no doubt feature lots more of them being all angry and explodey too. Hopefully the show won't focus solely on them though. Even if it sticks to canon there are plenty of other races to reacquaint us with and some established characters could be squeezed in too (it looks like we'll see Harry Mudd again, for example). Besides, it would be nice to get a few more light-hearted side-stories here and there, maybe a bit of humour or even romance amidst the more realistic wartime action and drama. It will be nice to finally meet the Discovery itself too! 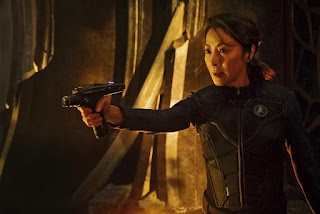 Overall though, I think the show is looking really good at this early stage. We haven't gotten to know too many characters very well yet (although the Shenzhou's science office, Saru, already looks like being a corker) but that will obviously come in time and those we've met seem quite appealing. The acting is of a good standard too, and the production values and special effects are fantastic. How closely the established Trek 'ideals' are adhered to remains to be seen but I can't wait to find out - I've been impatiently awaiting the third episode all week now (one more day!). It's not perfect, obviously. No show pleases everyone, much less a new Star Trek show, and never in a million years would all the notoriously picky Trekkies be happy - but I think it's great. Even if it wasn't, I'm just really happy to see Star Trek back on our TV screens at all.