Not long ago I spent a good while playing many arcade conversions on Atari's bulky handheld which culminated in a list of what I felt were the best ones - the Top Five Lynx Arcade Conversions. However, if there's any system that's famous for how much of its back-catalogue is made up of games of this type it's the Lynx, and, as I learned, there are more than just five good ones! To that end, here's a random selection of five more including, I hope, some corkers: 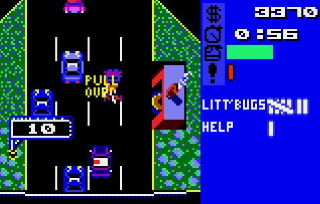 This overhead cops 'n' robbers game was was an eye-catching and intriguing title in its day which saw you, as 'Officer Bob', charged with taking down a set quota of wrongdoers per stage. There were a few conversions (including an excellent Speccy effort) but, like most Atari coin-ops of the day it also saw a release on the Lynx where, to my surprise, its vertical view is not used. This means the action is confined to barely two thirds of a horizontally-viewed game area and accordingly things are quite a bit slower than the nippy arcade game and feature less-complex stages as well, but that doesn't mean it's any easier! Indeed, you're not playing a rogue cop so anything you do remotely wrong earns you a 'demerit', and enough of these can swiftly result in you being fired and therefore game over. APB is tough and can often be frustrating, but it's a decent conversion all things considered, and also proves to be a fairly original and rather addictive overhead racer... 7/10 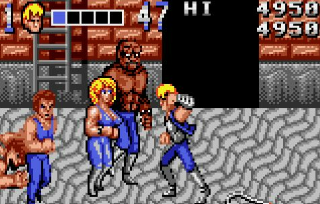 I've never really been that keen on Double Dragon, with the exception of the splendid Master System version, and this version has done little to convince me of its virtues. It was released quite late in the Lynx's life by mail-order company, Telegames, and it initially looked very impressive. As you can see, the sprites are huge, and the often-horrifying Lynx sound chip has a decent stab at those classic tunes too, but I swiftly encountered problems with the gameplay. The 'A' and 'B' buttons perform punches and kicks as you might expect but performing a jump on its own is enough of a pain in the arse never mind something as radical as a flying kick, and the controls generally are very sluggish. The stages are also very repetitive with little in the way of graphical variety. It was an ambitious way to tackle a conversion of a popular game, and it hasn't really worked, sadly... 4/10 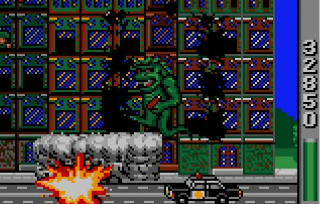 Say what you want about how limited and repetitive this game is, but there's nothing quite like smashing the crap out of tonnes of skyscrapers as a giant scary mutant monster, and you know it! I've played a number of versions of this classic, including on my trusty Speccy and Master System, and this port, while probably not the finest effort of them all, is still a pretty splendid one. The familiar three monsters - George the giant gorilla, Lizzie the dinosaur, and Ralph the wolf - are all present and correct and there's even a new character to use - Larry the giant rat! It doesn't make much difference which you use, the object remains to scale each building on the stage and smash it up until it's sufficiently damaged that it collapses, and they all do it as well as each other. Impressively, this version even supports four-player mayhem via the link-up thingy too! It's unlikely many gamers will ever enjoy that kind of carnage but this is a good conversion of an amusing and enjoyable game... 7/10 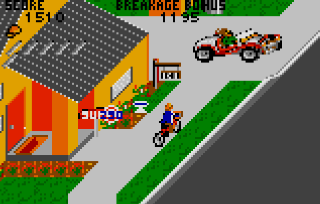 I guess if any Atari coin-op was going to appear on the Lynx it would be this one, even if it was released six years after the original! I've never really gotten my teeth into any version of it though, I'm not sure why really. Maybe it's because I used to be a paperboy - who wants to play a game of their old job? Eeep, just joshing of course! Anyway, regardless of your affection (or possible lack thereof) for this game, there's no doubting that the Lynx hosts a top version. All three streets are here for Mr. Paperboy to cycle down on his BMX or whatever the scallywag is using, and everything will no doubt be as you remember it - deliver the papers to all your subscribers (by way of throwing), vandalise non-subscribers houses (also by throwing), and avoid the many hazards, mostly consisting of idiotic people in various guises. Nothing much has been added or removed for this version and the music is annoying, but the graphics and gameplay are spot-on... 8/10 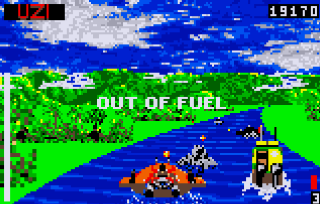 Water-based racing games are rather rare for some reason and so are water-based shmups. The fact that Hydra is a combination of the two must therefore make it a real rarity! It's also not a particularly popular or famous game which could mean it sucks, but judging by this conversion... it does not. The object is simple enough - race down various waterways shooting pretty much anything that moves, collecting money, bonuses, and weapons in the process. Where this game impresses, however, on the Lynx at least, is by its technical prowess. The graphics look rather blocky, even a bit messy from the screenshots, but they're fast, fairly smooth, and feature some superb scaling. It's not half bad to play either - the action is simple but there's some nice variety in the stages and they're good fun to race/shoot through too. A great conversion considering the system and an addictive game... 7/10


Red Parsley will be back with some more Lynx mini-reviews soon! :)
Posted by RetroKingSimon at 21:28