Some of the harsher critics of Sega's charming Master System might suggest that one of the few reasons to own one would be for the generally splendid quality of its arcade conversions. Many of these were conversions of Sega's own arcade games of course but, strangely, it wasn't the only place to find most of these. Games such as OutRun, Space Harrier, After Burner, Shinobi, etc, could be found on the NES, PC Engine, and other rival systems which meant the MS didn't always host the finest home versions of their games. It did still receive some spiffing conversions though, and here are five of the best: 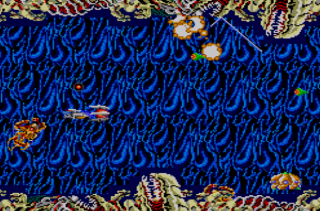 Considering its popularity, I've always found it amazing that R-Type was never converted to more systems, especially certain consoles. The PC Engine version is of course amazing (although split over two HuCards) but, unless you were lucky enough to own NEC's box of tricks, this MS version has long been widely regarded as the next best thing, and such a reputation is more than deserved. It suffers from the usual sprite-flicker, some sprites are a bit smaller, and the scenery and background graphics disappear to accommodate the large bosses, but apart from these points the MS has produced a splendid version of Irem's classic. The stages are well reproduced (and there's even a secret one!), the music is great, and the most difficult part of the arcade version to duplicate - the fancy graphics and large bosses - are also mighty impressive. A sterling effort then, and one of the best shmups on the MS. 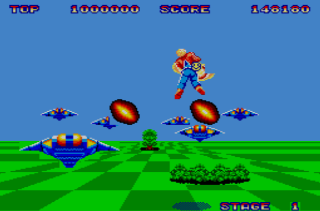 Unlike many arcade conversions for the MS, this was actually released quite soon after the arcade original, and considering how early it was it's pretty darn impressive, especially when you consider just how technically-demanding Sega's ground-breaking coin-op was to begin with. All eighteen of the bright, colourful stages have been crammed into this cartridge and, while they're understandably not as fast or smooth as the arcade game, they still look really nice and the MS moves them around as well as could reasonably be expected. That sprite-scaling that made the game famous is well-reproduced here too. Even better is the splendid music which helps to make this conversion among the most enjoyable there is. Sega even released a 3D version of the game for use with the Master System's special glasses. 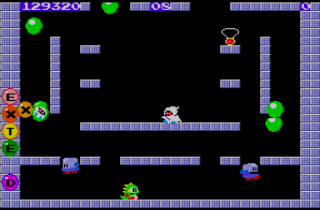 Yes, yes, I know, as immensely awesome as Taito's super-duper classic is, it was never the most processor-hungry game of all-time, even in its day. So, with this conversion arriving some six years later, it's only to be expected that it's at the very least close to the original, right? Well, yes, but such is the vast popularity of the arcade version and its deceptively-intricate gameplay, home versions were often unsatisfactory. Now, I'm not hardcore enough to know if this MS version includes every tiny detail, but I can tell you that it's a hugely slick and playable version of the all-time great. Plus, it was the first version I played at length as well which makes it my favourite, especially considering it has a handy password system which helped me reach the later stages for the first time, and it has a whopping 200 stages! The graphics are faithful, not as flickery as you might expect, and that catchy tune is present and correct as well which means, until the Saturn and PS ports arrived, this was one of the very best. 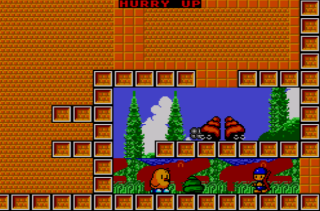 I've been a big fan of this cute-but-tricky Taito platformer since it was originally released and I rarely need much of an excuse to buy another copy of it. By the time this MS version was released, I'd already played the game to death on my Speccy and MegaDrive, the latter of which features different stages, so this was my first chance to play a version that may possibly be close to the arcade original. As it turned out, it was very close, more so than I had expected! The presentation is great and includes the short-but-appealing intro, and there's a map screen too - even the MD didn't have that! The insanely catchy music is perfectly reproduced here as well, the sound effects are nearly as good, and the stages and relevant graphics are spot-on. True, there is some flicker when too many sprites are close together, but other than that this is as close to the fantastic arcade game as is possible. 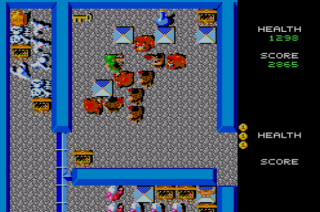 The first version of this game I ever played was the decent Speccy conversion which kept me entertained for hours but it wasn't until I stumbled upon the arcade version that I realised just how great a game Gauntlet is. The prospect of this Master System version was something I was a less enthusiastic about though. As great as the console is, many of its games are rather prone to sprite-flicker when there's a lot of them about, and not too many games have more sprites on-screen at once than Gauntlet! However, to the immense surprise of me, and no doubt many others, this conversion features a typically high number of sprites whilst suffering from no flicker at all! This in itself makes it a tremendous achievement on Sega's console but it's also near-faultless to play as well. The speech is of course missing (even the MD version struggled with that) but aside from that everything is here making it almost certainly the closest version to the arcade until the MegaDrive's super-port arrived.