It was a long time ago now but I'm quite confident the first time I ever played an example of an overhead racing game was when I received a a shiny cassette copy of Super Sprint for my Speccy sometime back in the late 80's. It ruled and it wasn't long before I sought out - and found, surprisingly - the mighty arcade machine from which it was derived. This ruled even more as it came equipped with three whirly steering wheels with which three players could wage an asphalt-based war. However, later the very same year that Atari released this instant-classic, they also released another game called Championship Sprint which was far less well-known. It even came bundled with my Speccy version of Super Sprint but I don't remember ever getting around to playing it. As with so many other such related matters though, it's lingered somewhere in my mind until today when this very blog gives me the chance to finally see just how different it is from its big brother.

The short answer is: not very! I expected Championship to be similar to Super (it had to be really, didn't it?) but it's more like a 'data disc' than an actual sequel. The splendid and eye-catching title screen of the first game has been replaced by a similar, arguably better example, but aside from that the neat graphics, and indeed minimal sounds, are exactly the same as before. The courses, however, are not (kind of). There are again eight of them to race around but, while three have been retained from Super Sprint including the simple opening effort, the rest are brand new. They're also quite tough, featuring several figure-eight crossovers and bridges (and therefore blindspots). The oil-spills, tornadoes, and wrenches for buying upgrades are all still here too - the only other discernible difference between the games besides the tracks is that support of a third human player has been dropped, presumably to make the cabinets a little easier to accommodate. 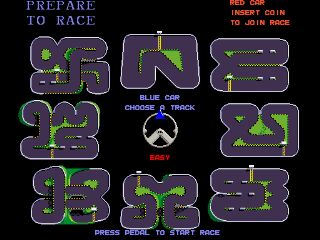 So, after all these long years of occasional, vague wonderings, it seems that my embarrassingly underused Speccy cassette in fact merely housed a few extra tracks. Accordingly, Super Sprint fans will find this as spiffing as ever (and probably already have been for years) - I certainly have now I've finally tried it, and the handful of new tracks are good additions. Any teams of arcade-goers lucky enough to find a machine will have to leave one friend behind though.