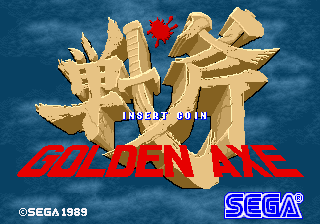 Video games may have started off in the world of science fiction but it wasn't long before they entered the realms of fantasy as well. One of the many type of resulting sub-genres quickly became known as the hack 'n' slash game and still one of the most successful and enduring examples must surely be Sega's mighty Golden Axe. It tells the story of an enchanted, magical land called Yuria in which warriors, amazons, knights, dragons, sprites, dwarves, and ordinary townsfolk all live together peacefully... until a demonic oaf called Death Adder steals the Golden Axe, the magical emblem of Yuria, kidnaps the King and his daughter, and starts killing people until they accept him as their new ruler. The cowering peasants of Yuria don't have to live in fear for long though - three brave souls step forward and pledge to send him back to the darkness from whence he came.

Our three heroes are Ax Battler, a broadsword-wielding barbarian, Tyris Flare, a non-hideous amazon armed with a longsword, and Gilius Thunderhead, a dwarf complete with beard and battle axe, and all of them have lost loved ones to Death Adder's tyrannical rampage so it's presumably little more than cold, simple revenge that fuels their rage. Selfish motives or not though, you and an optional friend must choose one of them and then set off in pursuit of Yuria's de facto ruler who lies five scrolling stages away. Like normal scrolling fighting games, each of the stages is viewed from a slightly overhead side-on perspective meaning your chosen hero can move all around the floor space, and all three of them have a similar range of moves and attacks including a run performed by double tapping either left or right which also allows them to jump higher.

The slashing attacks are similar for each character and include any of a number of combos depending on your distance from the enemy in question (which includes throwing them if you're close enough!) and they can also perform a jumping attack, both normal and running varieties, a running attack (head-butt for the dwarf, shoulder charge for the barbarian, a flying kick for the lady), and finally a rear attack (rolling axe thrust and overhead sword lunges respectively). They all sound remarkably similar so far I deem, but there is one major difference between them - their magic attacks. Indeed, each of the three characters can acquire magic potions by booting the little sprite/pixie things that turn up now and then and unleash their power at will in their own special elemental way - namely, Lightning for Mr. Thunderhead, Earth for Mr. Battler, and Fire for Ms. Flare.

The lightning is the least powerful of these (to compensate for the dwarf's stronger axe attacks) while the scorching fire is the strongest (and accordingly the amazon's sword attacks are weaker), with the barbarian fulfilling balanced medium character duties. All three of them can use their potions as and when desired though (or by accident if you're anything like me) and the attacks will damage all enemies on screen at the time. Besides pesky Death Adder himself (finally, an evil bad guy with a scary name!), these oafs come in just six different types - two basic club-wielding soldiers, leapy amazon girlies, large hammer-carrying guys (usually found in pairs), skeletons, and armour-clad knights. Though few in type, there are many of each through the game and they all come in several colours which indicates their level of strength and endurance. Fortunately, touching the enemies themselves doesn't cause damage but they'll soon wear down your energy-meter if you let them start whacking you or throwing you around!

One of the things that Golden Axe was most famous for, though, at the time at least, was the splendid creatures you could use to aid your quest. Occasional enemies will attack riding atop one of these beasties but once they're toppled you can climb aboard yourself. Which is well skill. The first one you encounter is called a Chicken Leg who was actually an enemy in Altered Beast, and he can knock enemies around by swishing his tail and can also perform a running attack. Better still are the other two creatures you can employ - dragons which come in blue and red varieties who can breathe fire or spit fireballs respectively. You can still be attacked while riding your steed though, and if you get knocked off too many times they will run away, presumably to munch on gerbils or something.

These beasties actually make the game pretty easy during the early stages but the difficulty level rises sharply upon reaching the fourth stage. Even so, Golden Axe isn't a particularly long game - a fairly skilled player could complete it in less than 20 minutes - but it's still always been one that's appealed a great deal to most gamers. I don't think this was really down to its visuals or audio though. The latter consists of some decent though rather quiet tunes, good effects, and some amusing/terrifying screams by the enemies upon their deaths, while the former features some superb, distinctive characters and a couple of nice locales, but not much in the way of colour or variety. The way the stages are designed is more appealing. They do a good job of representing a land in turmoil, taking you from the barren wilderness of the first stage, through deserted villages past their fleeing inhabitants, until you finally reach Death Adder's castle.

The fantasy element of the game has also been incorporated into the stages by way of some unique modes of transport - a giant turtle and a giant eagle - both of whose backs comprise entire stages, and I think it's this kind of thing as well as the cool dragons, flashy magic, and pesky little thieves stealing your magic potions in the bonus rounds between stages that makes Golden Axe so memorable. It doesn't hurt that the controls are intuitive and responsive too, and the two-player mode is a superb one. The only problem really is the meagre number of different enemies and the short length (something Sega looked at with the stonking MD conversion) but neither that nor the substandard sequels and spin-offs that followed have managed to dampen the enthusiasm most gamers have when the Golden Axe name is mentioned. Still one of my favourite scrolling fighting games.