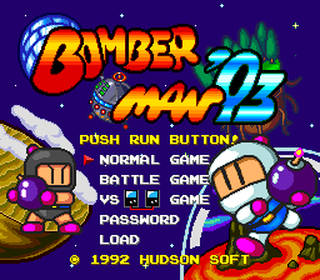 It may have only been a couple of years but after numerous sequels and spin-offs the Bomberman series has finally returned to the place many gamers feel it belongs. That's right, the mighty PC Engine! This triumphant return brings with it the renewal of the epic battle between White Bomberman and the despicable Black Bomberman who this time, as relayed in the amusing intro sequence, has now attacked a city and stolen the seven circuit boards that power it, scattering them across several nearby planets. That fiend! Thanks to this heinous plot, Bomberman unsurprisingly has to battle across the seven unique worlds - Planet Quarry, Blossom Planet, Planet Inferno, Planet Wither, Planet Surf, Icicle Planet, and Planet Techo. Each hosts eight stages - seven normal ones followed by a boss stage, and to begin with they're mostly a single screen in size but quickly get bigger, scrolling either horizontally or vertically up to about three screen lengths (or widths). 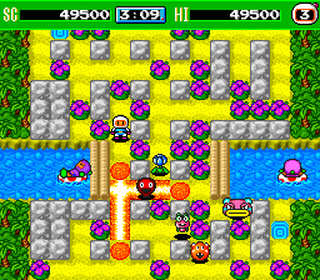 Much like the first PC Engine game, each stage again offers only one power-up item hidden somewhere beneath its many soft destructible blocks (mostly the usuals - extra bombs, extra fire, remote bombs, speed-ups, one-hit shields, block pass, etc) so it might take a while to thwart evil Black Bomberman's terrible plans! In fact, aside from the slightly different (and largely meaningless) plot, there's not too much difference between this game and its predecessor. The most noticeable changes are with the visuals. There are a few new enemies and some superb bosses, and some of the stages are gorgeous (the snowy sixth world is my favourite). The worlds are themed as usual and they're more detailed and more varied than before, particularly the blocks and scenery around the edges of the stages as well as their layout. All are still rectangular arenas but some now feature obstructions part-way through, such as the watery areas (see above), pits of lava, piles of snow, or other things of that nature, all of which force you into more confined spaces. 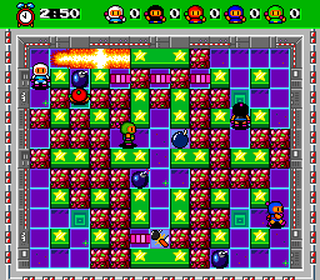 Other new stuff includes grated floor tiles on which you can't place bombs, teleporters to move around quicker, conveyor belts which can help or hinder your progress, and there are also a few theme-related features too, like sand on Planet Wither (as well as regenerating soft blocks - grrr!). This is all just in the one-player Normal Mode of course, which I've always enjoyed a lot, but happily for all you multi-player fans out there the link-up mode is back (and probably won't be used) as well as the awesome five-player Battle Mode which is better than ever, thanks partly to the choice of eight splendid arenas in which to wage war, but also due to a new power-up - the 'bomb kick' - which is most effective in this chaotic mode! Much of the new stuff is pretty minor though - mainly the lovely graphics as mentioned - with the core of the game unchanged. But hey, if it ain't broke and all that! Besides, it didn't stop Bomberman '93 being among the best multi-player games around at the time of its release and still one of the most appealing entries in the long series.