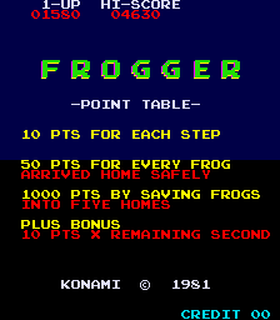 I've always rightfully regarded Frogger as a classic but I've never actually spent too much time playing it. With that exhaustive list of available conversions above I guess I don't really have much of an excuse for that but, as always, in order to take a proper look at the game, I decided to start with this delightful original version which first appeared way back in '81 courtesy of Konami. It has long been considered a slightly odd game though. It consists of a series of single-screen overhead-viewed stages on each which the object is to guide a frog (or in fact, five frogs, one at a time) from the bottom of the screen across a busy section of road, then across a river, to one of five 'homes' at the top. 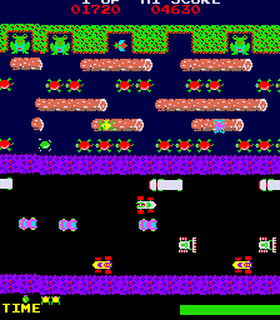 The odd part is, amongst the numerous dangers that can befall our amphibious friends whilst attempting this, one of them is water! Yes that's right, as well as the cars and trucks moving back and forth on the lower half of the screen proving deadly to the touch as you would expect, the water-filled upper half of the screen must be crossed by using the turtles and logs floating back and forth in it - if Froggy falls in the water, he loses a life! Poor things, imagine being a frog and allergic to water. Their lives are of course entirely at the mercy of the player anyway though. They can hop in four directions and they're fairly fast, all things considered, but they're not fast enough all the time. 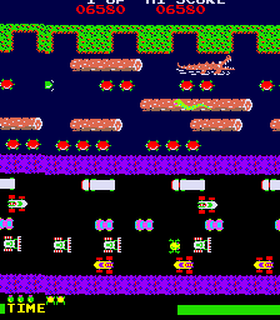 There's a time limit to get each frog from the bottom of the screen to the top for one thing, and riding a log or turtle off the side of the screen will also cost a life. Some turtles also turn upside down while moving which will cause you to topple off, and more dangers come later. If you manage to fill all five 'homes' with frogs it's onto the next of the infinite stages. Here, there are more cars on the road and they also move faster and faster, some logs in the river also get replaced by crocodiles, there's another crocodile that lurks near the 'homes', and even malevolent otters and snakes turn up after a few stages. Before long there's so much going on you'll be looking for somewhere to hide! 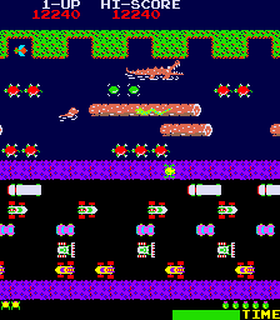 The only 'safe' zone besides the starting point, though, is a thin strip of land separating the road and river but even this is occupied by snakes later on. The only non-deadly things to look out for are a blue female frog (which probably has a bow on its head but it's too small to see) that turns up on the logs now and then or bugs which can be caught, both of which offer bonus points. Despite so much conspiring against our croaky friends, it's easy to see why Frogger has remained so popular after all these years. It's as enjoyable and addictive as any of the early classics (it's even relaxing to play at times!), and even though it wasn't very innovative from a technical point of view, it still looks and sounds very pleasant, especially the catchy music. The difficulty curve is as harsh as usual for its day, although partly thanks to some tight (and simple) controls I still got a good few screens into the game, and that's not something I can say about many of these early arcade games! Beyond all that though, Frogger has the sort of charm that would make me want to like it, even if it had numerous faults, and it doesn't have any really. I suppose the stages are a bit repetitive but how many weren't back then? Perhaps it's to do with actually having to save something for a change, rather than destroy it, that appeals to me. Either way, it'll be interesting to see how much the many sequels and spin-offs might've corrupted this endearing and innocent original.