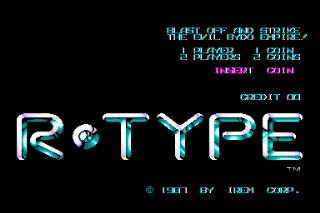 It may not seem like it but this is a rather special shmup review today. For those readers who haven't been keeping track (probably all of you), this is not only the 100th arcade review here at Red Parsley but it's also the 100th shmup review too. At the same time! Amazing, huh? And what better game to mark such a momentous occasion than arguably the most celebrated example of all time?! However, a legend it may be, but it's also a game I haven't played nearly enough. I had it for my Speccy and Master System (probably still have, actually) and both were superb conversions, but by far most of my R-Type gaming has come courtesy of Super R-Type on the SNES which, as you may know, features more of R-Type 2 than the first game. So, the motivation behind this review, other than featuring a game worthy of such a landmark, is to finally, belatedly dissect the original arcade version that so wowed gamers back in the mid-80's. Bydo Empire, prepare to be smacked upside the head!

Although it would be significantly expanded upon for later games in the series, the back-story to this original 'begins in deep space warped by evil power'. Specifically, in space warped by the evil Bydo Empire who have designs on our beloved home planet. There is of course 'only one hope for victory', that being a single ship piloted by a lone brave hero. Luckily, the ship is the R9 Arrrowhead which is a reasonably splendid one. It comes equipped with a rapid fire Vulcan cannon which is also able to fire a more powerful 'charged' beam shot - achieved by holding down the fire button for a few seconds. This as well as everything you can muster may not be enough to make it through the eight side-scrolling stages that stand between Earth and Bydo destruction, though, for R-Type is notorious as one of the toughest shmups ever released - a bold statement for this genre!

This immensely harsh difficulty is not what R-Type is most famous for though. Many call it the most influential horizontal-scroller of all-time, and it could well be just that, but it was the innovative way in which most aspects of its design were approached that made it so memorable to play. Power-ups, for example, had been done before, perhaps most notably by Gradius, but Irem pretty much rewrote the book on the subject. Aside from a speed-up or two (which are very essential to get the initially-sluggish R9 moving), the first power-up you found upon shooting one of the special hippity-hoppity craft that house them was the 'Force' pod. As players soon found out to their delight, this spherical device (which looks a bit like a Gradius 'option' if you take off the metal struts, oddly enough) could be attached to the front or rear of the R9 and, as well as looking fairly cool, also incorporates any of three special weapons.

These power-ups, known as 'Laser Crystals', come in three varieties - Red (air-to-air laser), Yellow (air-to-ground laser), and Blue (bouncy reflective laser). They're activated by collecting any two crystals and are handy right away. Collecting a third crystal will increase the size of the Force and the power/range of the weapon along with it which is even handier! With a game this challenging, choosing the correct weapon for each particular stage or section is obviously important and can make a huge difference. The Red laser, for example, is the most powerful but has a limited range while the Yellow laser is great on sections with lots of cannons or enemies on/near the landscape but pretty much useless otherwise. The Blue laser, though, was the one that most caught my eye when I first played R-Type with its this beams bouncing around the scenery and it's probably a fairly safe compromise between the other two in most circumstances.

As well as providing these splendid weapons, however, the Force has a few other ultra-useful features - it can absorb the smaller enemy bullets or damage any enemies it touches while attached to the R9, and it can also be launched from whichever end of the ship it's attached to, damaging any enemy vessels it touches in the process. It can operate independently in this capacity too, albeit with much reduced firepower. Aside from the speed-ups, the Force pod, and the three weapons it facilitates, there are two other power-ups - Homing Missiles and the Bit Device. You can have up to two of the latter, which are positioned directly above and below the R9, and they behave a little like the Force except their position is fixed - they damage enemies they touch, they absorb small bullets, and they fire squiggly shots of their own. It doesn't take too long to amass this impressive arsenal either but... you guessed it, it's all gone if you lose a life!

On top of that, you have to start the current stage from scratch too - unlike Gradius you don't even get a free speed-up here - ooof! This isn't the only reason for R-Type's toughness though. The enemies rarely come in swarms of weedy, tiny little ships that you can mow down in droves the second they appear. The only examples I can think of, actually, are the little guns that often adorn the scenery and the flappy red ships which are the very first enemy encountered. Most of the smallest examples here would be classed as 'medium' in other shmups; only a few of them can be taken down by a single shot and most have plenty of flamey death to send your way too, whether that's lasers/ bullets from the gun-pods and various types of spacecraft, missiles from the walkers that hog the scenery (both top and bottom), or even the irritating vessels that just fly around leaving trails of obstructive green blobs in their wake (which not all weapons can destroy).

There are over thirty unique types of enemies in total so there are of course many larger and even more dangerous foes lurking as well, not least the fearsome bosses. Like the normal enemies, these come in biological or mechanical forms, or a combination of both. The first one encountered - Dobkeratops, to the right here - is easily the most famous example but they are all large, pretty strong, and can be real bitches to defeat, especially with the wrong weapon! They all have weak spots though, and can eventually be taken down with relative ease once you've learned their patterns. That's also true of the stages themselves really. Unlike most shmups, especially more recent ones, R-Type doesn't just throw countless enemies and/or bullets at you - most stages actually feature a meagre number by comparison and instead gave them more creative attacks and movements - and learning these is the key to progressing beyond the first stage or two here.

The stages themselves are a real challenge too, probably even more so in fact. They are named thus - Encounter, Creature Cave, Gigantic Warship, Frontline Base, The Den, Transport System, City in Ruins, and The Bydo Empire's Star - and many feature sections of extensive scenery, sometimes even with moving parts, and these areas can be very tricky to navigate whilst simultaneously exterminating the Bydo scum and avoiding their many projectiles, especially as collecting too many speed-ups will often result in crashing into the scenery (which I definitely didn't do repeatedly in that pesky sixth stage above!). As inconvenient as some of these things might be today though, this really was a remarkable game in its day. Near enough everything is very distinctive in appearance and featured the kind of visuals that just hadn't been seen before. The explosions and weapon effects are fantastic, for example, but they were nothing compared to the other stuff!

The stages were more detailed as well as involving than those found elsewhere owing to the frequently extensive and often obstructive scenery. The third stage features little more than that famous green battleship, which was impressive enough itself, but the first, fourth, sixth, and seventh stages all consist of superb looking metallic walls, barriers, and contraptions, while the second, fifth, and final stages have a much more organic look with tendrils and squishy organs and other unpleasant stuff. It was the enemies that really wowed gamers of the day though. Like the scenery, they're a mixture of machines and creatures, but both kinds look great and were way ahead of their time. Most of the ship designs are colourful and detailed and the more wriggly foes were probably the first examples of genuinely creepy sprites in a game. Most of the bosses still impress today, especially the iconic Dobkeratops who would make appearances in numerous later games in the series too, but all parts of the game knocked players socks off in the day.

It's not a perfect game, of course. The audio, while still decent, was less impressive from a technical point of view (although some of the music and effects are almost as famous as the graphics these days), and most of the graphics are not nearly as colourful as many of the conversions I've gotten used to so it seemed a bit washed out at times. The stages are also a bit too short for my tastes (only a few screens long in most cases) and you could argue that they're a little too distinctive - after the first few 'sessions' you always know exactly what's coming, at what time, and from where, as it's all so memorable and unique. I suppose I'm just looking to balance out all this praise though - some of these all-time great, landmark games retain their legendary status as well as the affections of fans, but aren't really that enjoyable to play anymore; a vast majority of R-Type is great fun to play through every time, and it holds up superbly well today. Whether it's the greatest shmup of all-time is debatable - that's down to personal taste - but it is a wonderful shmup. A true legend and one of the most important games in history.