Well, we're now over half-way through the mighty Next Generation's run and even before I started watching the fifth season again I suspected it would be the most challenging one yet to whittle down to five episodes. This indeed proved to be the case - I was even forced to count the mid-season two-parter as one selection - but that at least demonstrates the increasingly splendid quality on offer!

One of the more notable (as well as sexiest) occurrences was the introduction of Ensign Ro Laren, a 'troubled' Bajoran officer, who immediately starts giving everyone attitude, and we also meet the dangerous Silicon Avatar thingy for the second time. Meanwhile, those Cardassians start flexing their muscles, everyone has orgasms playing some weird addictive brain-stimulating game, Worf's parenting skills are (unhappily) put to the test, the Enterprise gets stuck in a time-loop ending with its destruction over and over, a clone of Lieutenant Tom Paris is found on Earth masquerading as a cadet (snigger), a little girl's imaginary friend causes havoc on the ship, and Geordie and Ro get 'phased' during a transporter accident which leaves everyone else thinking they're dead. Eeek!

There's also an interesting episode called 'Conundrum' which I wanted to include below which sees the Enterprise crew all knocked out by some zappy beam. When they come around they have no memory, obviously! Much to my amusement, Worf assumes he's in charge while Riker enjoys the company of both Troi and Ro who are each trying to out-shag the other. Most startling to us viewers, however, is the appearance of a new First Officer on the bridge - Commander MacDuff - bossing underlings around! Anyway, the five episodes I did plump for are these: 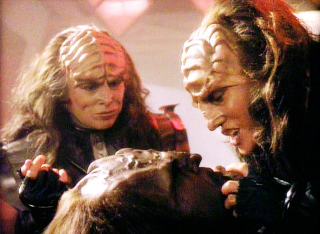 Grrr, Klingon fisticuffs are always entertaining and this incident has fast become a full-blown civil war! The forces of Duras are bearing down on Gowron's fleet, even now they're bolstered by the might of the Mogh brothers' ships, mainly because the slutty Duras sisters have enlisted the help of Sela and her Romulan cronies. Meanwhile, the Federation, recognising that the sneaky Romulans will seek to take advantage of the situation, have deployed a blockade of ships at the border, some of which are commanded by Enterprise bridge crew (including Data who initially isn't given a ship). The outcome is pretty predictable, as it usually is I suppose, but after The Best of Both Worlds this is generally regarded as the best TNG two-parter, and with good reason too - there are some great characters here that we don't see nearly often enough as well as a good helping of cool spaceship shooty action as well. Even Data gets to lay the smack down for a change! 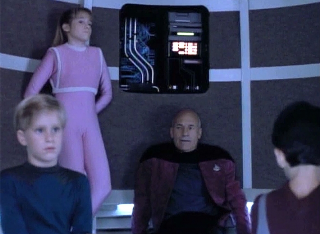 This is another of those episodes that is completely inconsequential in all ways but I still always enjoy watching it a lot. As it begins, life aboard the Enterprise is proceeding as normal. Counsellor Boobies is on the bridge with Ensign Attitude and Chief O'Brien; Riker, Data, and Worf are in Ten Forward along with a very pregnant Keiko; Geordie and Foxy Doctor are in a cargo bay; and Captain Picard is giving three whiny children a tour of the ship (which he's very much enjoying)... BUT THEN!!!... the ship is struck by a quantum filament which causes a loss of power and lots of damage, stranding everyone in their given locations. In the Captain's case, that's in a now-rather ricketty turbolift with the three snivelling kiddies and a broken ankle. In the cargo bay a potentially fatal plasma fire has started, and in Ten Forward the stressed-out Keiko has gone into labour with only Worf around to help her as Riker and Data are trying to crawl their way to Engineering. Meanwhile, on the bridge the three officers are arguing about who's in charge! Tee hee hee! 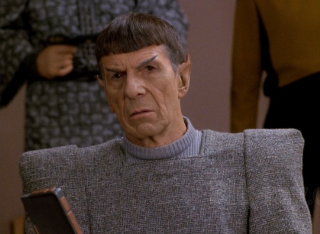 Yes, I know, it's a two-parter but I had to include it as one episode or I'd never find space for them all! It was one of the most famous of all episodes at the time too, and a quick glance to the right will reveal why. That's right, God to most nerds and legend to everyone else, Spock, makes his glorious return! Well, not that he'd been gone for long since this was screened between the fifth and sixth TOS movies but still, it's always great to see The Logical One. In this 'future' incarnation, however, he's gone missing from his ambassadorial duties and has instead been spotted on Romulus. Picard and Data are sent in pursuit (in disguise of course) where they do indeed find him, busy working towards the reunification of the Vulcan and Romulan people. It's not the most mind-blowing episode ever but it is a good one, and a decent premise too - you just know those treacherous Romulan dogs will be up to something. Let's face it though - Trekkies would've watched 84 minutes of Spock silently meditating. Including me. Live long and prosper! 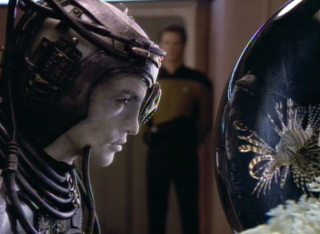 It's about time those bumbling Borg automatons showed up again but this isn't how I thought we'd see them. Nor did the Enterprise crew either, apparently, who react with great fear upon the discovery of a downed Borg ship, especially poor old Locutus for obvious reasons. One drone survived the crash, though, and is brought aboard the Enterprise before the 'mothership' comes looking for it. The Enterprise scarpers while Geordie and Data study the injured drone, hoping to find something that could be used to get one over on the Borg during their next encounter. They are successful and find a way to plant a virus within the drone which would then be absorbed into the collective upon his retrieval, crippling them. In theory at least. Trouble is, he's started to regain his individuality during the time spent studying him and some of the crew have become rather attached to him. An intriguing episode which poses some great moral questions. 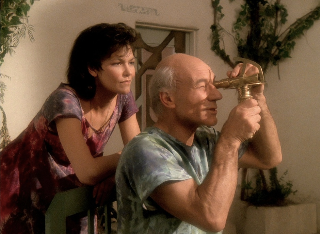 An obvious choice, this one, which is not only regularly cited by fans and critics alike as the best TNG episode ever but it's even the personal favourite of Sir Patrick Stewart himself - impressive stuff for a single episode featuring very little of canonical significance! Of the regular cast, the Captain gets by far the most screen time thanks to a mysterious probe encountered by the Enterprise which zaps him, leaving him unconscious on the ship but waking on a planet called Kataan, apparently suffering with a feverish illness which a lady called Eline, who identifies herself as his wife, has been nursing him through. As he recovers he finds that's he is supposedly Kamin, an iron weaver, who has lived on Kataan with his family and friends for many years, none of whom have heard of any starships called Enterprise or even the Federation. At first he spends his time trying to contact the ship or Starfleet and find out what happened to him but over time he accepts his life on Kataan and grows old amongst treasured friends and family. That's not quite the end, of course, but on the off-chance someone reading may not have seen it, I don't want to spoil it. Suffice to say, The Inner Light is a wonderful slice of science-fiction and surely among the best of all Trek episodes.

Look out for my Season Six picks soon!