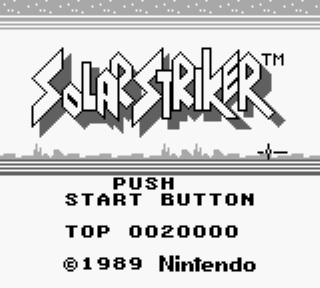 Gunpei Yokoi certainly seems to have been a busy fellow during the lead-up to the Game Boy's launch. Not only did he design the system itself but also had a hand in the development of some of its launch titles as well! One was Solar Striker, the first shmup for the new handheld (in the UK at least), and one that has a slightly unusual back-story for such a game. It's set in the year 2159, soon after the establishment of the Earth Federal Government and along with it the Earth Federal Army. This all seems sensible enough for a newly space-faring race. However, it seems that having such an army available wasn't a sufficient comfort for Earth's leaders who instead decided to launch an unprovoked attack on the nearby Turin system. Amusingly, we got our arses kicked in the process! Did we then apologise and skulk back to our insignificant little planet? No, we didn't. We instead developed a 'very advanced space fighter' called... yep, the Solar Striker. 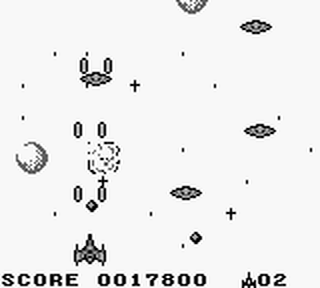 In the unfamiliar role of aggressor, it's then your job to pilot this craft through the six vertically-scrolling stages that make up the Turin system and destroy all who stand in your way, thereby securing our safety. The innocent victims of your murderous crusade come in several different forms, many of which look more like insects than spacecraft, and they approach your guns of terror in formations. If you manage to slaughter enough of them, the end of the stage is guarded by a larger ship or base desperate to protect any remaining civilians. The first of these stages takes place in open space - presumably as you approach the happy, peaceful planet and its many inhabitants so blissfully unaware of the hateful rampage that's just begun. The second stage takes place as you descend through the clouds of their beautiful planet, while the remainder take in cities, rural areas, and various other population centres where you'll be able to inflict maximum casualties. 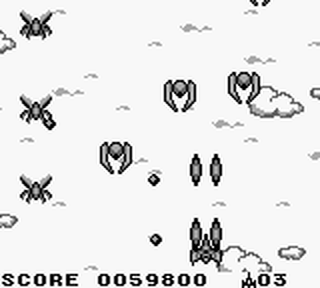 The Solar Striker ship itself is fairly adept at scorching flesh from its screaming victims too. It's fairly quick and agile to move around and starts with a decent forward cannon. Collecting 'P' icons will power it up to a twin shot, then a triple shot, before upgrading it to a more powerful cannon altogether. There are no bombs or different weapons available but luckily your cannon is just powered-down a bit when you lose a life and additional lives can be accrued based on your points so it's a pretty fair game as shmups go. It's actually a bit too easy - I'm far from a skilled gamer and the first point I found a noticeable challenge was the fourth stage boss which is two-thirds of the way through the game. It's also a rather short game - you could quite comfortably blast your way to the end within twenty minutes, so if you're one of those gamers who's always jealous of their friends 1CCing a game in the blink of an eye (almost), here's your chance to do the same! 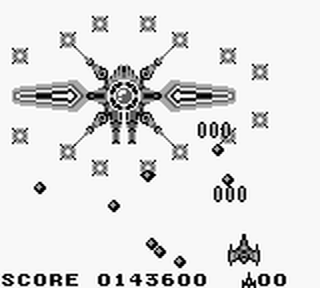 Anyway, short and easy it may be, but Solar Striker is also a pretty appealing game. I wasn't expecting much I must say (it didn't exactly earn rave reviews on its release), but my first impression of it was great. The music is catchy and pleasant and the effects are good (I especially liked that some types of enemies make different noises when they're destroyed), and the graphics aren't bad either. The largely white background doesn't provide a huge amount of variety but it does mean you can easily see the well-drawn enemies and their bullets which, combined with smooth and responsive control of your ship, makes for an easily enjoyable game. It actually plays a bit like a scrolling Galaga to start with, which is no bad thing! It does get a bit repetitive after a while as, aside from slightly differing background graphics, the stages are all very similar to play through, but hey - if a short, simple shmup was suited to any system of the time it was the Game Boy! There's nothing particularly special here but Solar Striker is good fun while it lasts.