Throughout the 80's and the first half of the 90's, platform game were surely one of, if not the most popular of game genres. Such popularity brought with it many, many examples to choose from and, while their main characters differed, many of which were anthropomorphic animals, and usually included the odd gimmick or two, most fell into the same pattern of being set in themed fantasy worlds.

One setting that most developers failed to take advantage of, however, was that of our own world's prehistoric years. Given the genre's obsession with grassy, tree-lined stages, our planet's formative years would've made a perfect setting for all sorts of platformy adventures, surely? All those bizarre creatures, rugged landscapes, and geologic instability offered some wonderful opportunities which few took advantage of. There were a few though, most of which appeared within a couple of years of each other, curiously, and here are my favourites: 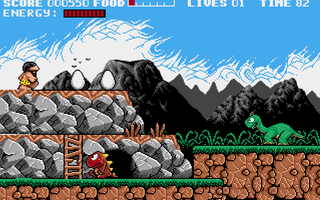 Perhaps the least well-known title on the list is this one which was released on a handful of home computers (Amiga version shown) by French developer, Titus, who were notorious in their early years for their consistently poor titles. Luckily, Prehistorik is not one of them! Like all but one of the games in this list it casts you as a hairy caveman and, also like the other games, it inaccurately thrusts Homo erectus (snigger) and dinosaurs together. One way that this game is unusual, however, is that it's a flick-screen game which is something I like about it. Aside from that it's pretty standard stuff - simply whack the various creatures (dinosaurs, bears, monkeys, gonks, etc) with your club to fill your food-meter. Touch any of them without whacking them (or some stuff that looks like parts of the scenery) and you lose energy. It's a simple one but it has appealing graphics, decent music, and is also rather addictive. There are a fair few sequels too - must try those soon! 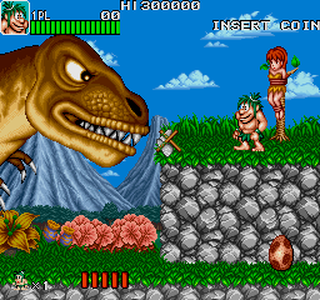 I first encountered this game in its SNES incarnation and didn't even realise it was a game with arcade roots until a few years later. I'm glad I did too, as it turns out it received some sizeable tweaks on its way to Nintendo's machine. The stages here are much shorter for one thing, sometimes only about three screens long, but makes up for it with annoying (and infinite) enemies which mostly consist of other cavemen (who stole Joe & Mac's girls, as if you needed telling that!) as well as various dinos - probably more than any other title in the list, in fact. It can be more than a little frustrating then, but it has plenty of good stuff too, including lovely graphics, some huge bosses, catchy music, appealing stages, and a great sense of humour. Plus, this is also the only game on the list to offer simultaneous two-player action - a rare thing in platformers of any kind, nevermind leapy, axe-throwing dino-fests like this! 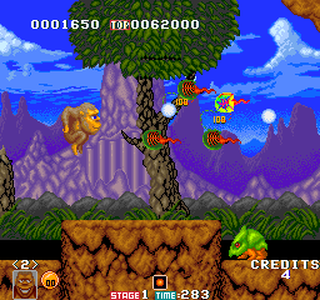 This is another game I first played outside of its arcade home, on the Lynx in fact, which hosts a pretty spiffy version of it. As much as I enjoyed that though, the arcade version, which I found a year or so later, is always the version I return to nowadays. It's a slightly unusual one too, in that it actually doesn't star a caveman or any other kind of primitive human but a rather friendly-looking ape, named Toki no less! The story is less unusual and involves an evil witchdoctor named Vookimedlo who has kidnapped the beautiful Miho and is holding her six tough stages away from her hairy would-be saviour. Surprisingly he has no dinosaurs to battle but there are a few strange mystical creatures amongst the more normal reptiles, fish, bugs, and of course more monkeys. Actually, now that I think about it, this might not even be a game set in prehistoric times - it could just be based in a deep and untouched jungle kingdom hidden away somewhere. Oh well, it's too late to leave it out now! Besides, I've always had a bit of soft spot for poor Toki and his fireball-spitting antics. (full review here) 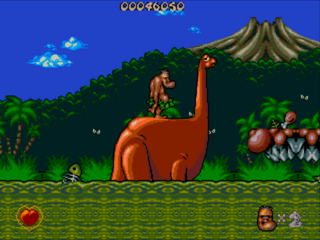 It was unusual at this time for a British platformer to achieve fame or success but Chuck Rock did just that, and its story was typical of our 'quirky' sense of humour. It saw the pot-bellied caveman of the title lumbering across five large stages in pursuit of his wife who had been kidnapped by the jealous Gary Gritter (chortle). Most of the enemies are actually not dinosaurs but, aside from their cartoony nature, are probably of the kind you would expect to find in these locales (spiders, bats, jellyfish, frogs, etc). There are some dinosaurs here and there though - some are helpful like the big cow in the screenshot here while others more predictably take the form of bosses. My favourite aspect of its prehistoric-ness, though, is the lovely foreground graphics which include lots of boulders and plants and stuff, and Chuck's use of rocks (see, it's not just a silly title!). These can be carried around and used in a variety of ways (as weapons, shields, stepping stones, etc), and really help the game stand out. (full review here) 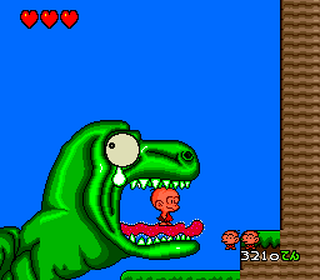 This game of a thousand names is possibly the one that started the whole prehistoric platformer trend (as short lived as it apparently was) and it's still remembered as one of the finest platformers of any kind to grace the PC Engine. High praise indeed, and much of it is thanks to the main character who... well, had a lot of character! Whatever name you might use for him, the caveboy had a sizeable noggin and was more than happy to put it to use across five large scrolling stages featuring some of the goofiest looking dinosaurs and other strange creatures you're likely to find in any game on NEC's white (or grey) box o' tricks, none of whom can last long against PC Kid's headbutting power. He was also able to grip onto walls with his almost as sizeable teeth and went hyper upon eating any hunks of meat laying around. It's a pretty tough game though, with many treacherous areas covering lush tropical vegetation, deserts, waterfalls, and of course volcanoes. PC Kid wasn't necessarily the flashiest game around at the time but it was the clear winner as far as its gameplay was concerned. (full review here)