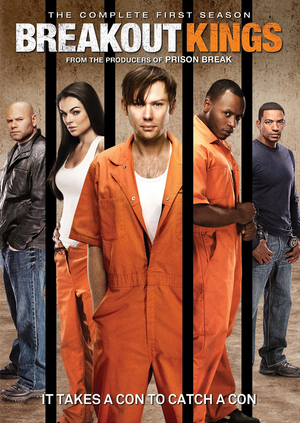 Tagline: "It Takes a Con To Catch a Con"

As far as most TV fans are concerned, Prison Break started out as the greatest new show of all-time but gradually decreased in quality season by season until it reached its dramatic conclusion at the end of its fourth season. It still had a lot of fans throughout its run though, so how do you appease them once the show is over? Create a spin-off of course! Yes that's right, for as well as sharing the central theme of 'prison breakouts', Breakout Kings is also by the same production team and is even set in the same 'universe'. In other words, there's the potential for crossover stories - potential that doesn't go wasted, incidentally. The premise of the show is rather different to Michael Scofield's adventure though. Breakout Kings is the name given (unofficially) to a group who are charged with tracking down escaped prisoners or 'runners' and returning them to captivity. The trick is, the team is partially composed of convicts currently serving time themselves. After all, to quote the show's tagline, it takes a con to catch a con... in theory at least!

The team was originally an idea of former US Marshal, Ray Zancanelli (Lombardozzi) but, since he's recently done some time himself for stealing money from a crime scene, he's not really in a position to command it. So, he works under Charlie Duchamp (Alonso), a Deputy U.S. Marshal who's been behind a desk for the last six years due to a congenital heart defect, with help from Julianne Simms (Nevin), a former trainee Mashal who was expelled for her various psychological disorders (social anxiety, panic disorder, etc), who acts as the team's analyst. 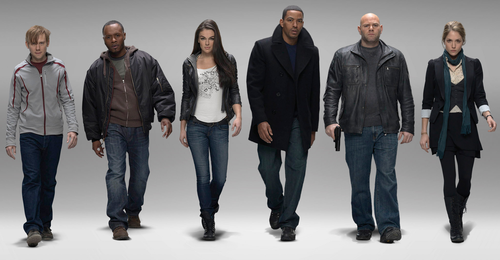 The rest of the team consists of the oft-mentioned 'cons' - Shea Daniels (Goodwin), a former gang leader, Erica Reed (Swan), a former bounty hunter, and Dr. Lloyd Lowery (Simpson), a former child prodigy, professor, and behaviorist - who together bring the right blend of skills and experience to get the job done. Their motivation? Whilst working for the US Marshals they get one month off their sentences for each runner they help to recapture, and between jobs they get to stay at a swanky minimum-security prison. However, if any of them try to escape themselves or get up to any funny business of any kind, they'll be shipped straight back to maximum-security with their sentences doubled. Eeek!

Basically then, the whole operation is a second-chance for pretty much the entire team, marshals and prisoners alike, so they're all determined to make good, but it's a risky combination too, and there's a lot at stake... 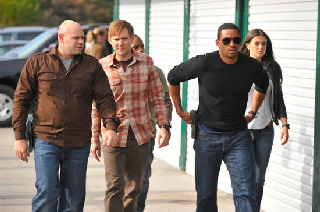 The pilot episode, which is just an ordinary length one by the way (what happened to feature length pilots?), obviously has to introduce all the characters as well as the general concept, but after that the format is quickly established. Each given episode's prisoner (or prisoners, occasionally) is shown escaping before the opening-sequence, then the team is called in and briefed on the runner(s) in question. After Julianne accesses their record and history, Lloyd is usually able to predict their intended actions or destination. Then, using Shae's 'street smarts' and Erica's tracking skills, they're able to lead Charlie and Ray to the perp. This usually takes some time though, of course, during which most of them are up to no good, either continuing the crimes that landed them in prison or exacting revenge on those who put them there. This first season starts quite slowly, although the highlight - the much publicised appearance of Prison Break's 'T-Bag' as a runner - is as early as the third episode, but the early friction between the team members (particularly the cons) and the antics of the runners themselves make this a pretty entertaining season... 7/10 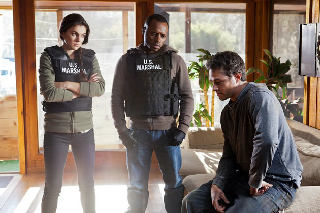 For the second season, however, there's an attempt at introducing a story-arc with the team's failure to recapture an intelligent sociopathic serial killer who has a history with Lloyd. Through much of the rest of the season, the killer taunts the Kings, specifically Lloyd, while they are busy dealing with other runners culminating, predictably, in an end-of-season showdown. There's also a minor sub-plot involving Erica shagging some guy who lives in the warehouse the team operate out of, and who it seems has an ulterior motive for doing sex stuff to her (although most guys would probably do her anyway - she's hardly a trog). Aside from that it's the same sort of thing as the first season really, although we sadly lose one of the main characters this season. I did actually enjoy this season more than the first though, mainly because of the greater chemistry (and resulting banter) between the cons who are laughing and joking with each one minute, then threatening each other the next, but also since there's more going on as well, especially for Ray, who's got an IA guy gunning for him, and Lloyd who is the unwelcome target of the aforementioned killer's attention... 8/10

Let's face it - a majority of people who watched Breakout Kings probably did so due to the Prison Break connection (myself included) but, since it only lasted for two short seasons, I kind of expected it to suck. However, while I wasn't overly thrilled by the first couple of episodes, I must say the show grew on me a lot, mainly due to the evolving relationships between the characters who are a great mix, each bringing something different to the team. Ray is a bit of hot-head who is perhaps a little too eager to prove himself after his previous indiscretion (he actually looks, and acts on occasion, like the king of dirty cops - The Shield's Vic Mackey) while Charlie acts as the disciplined authority figure, although even he loosens up now and then.

The cons are generally the more interesting characters though. At first only Shae's past is known by the the others and Goodwin plays the part of a gangbanger well. Erica, the main female character (who just happens to be a gorgeous big-boobed babe with an attitude who also happens to be the only con not to have her upper body covered by her prison jumpsuit in all the the promo shots) is much more secretive, doing little to confirm or deny the rumours about her past. The stand-out character for most, however, is the narcissistic genius, Lloyd, played superbly by Jimmi Simpson, with the reason behind his conviction even being kept from the viewers for a good while. Last but not least is Brooke Nevin as the meek little computer geek, Julianne, for whom both Lloyd and I quickly developed a soft spot!


It takes a little while for these characters to gel but once they did I enjoyed Breakout Kings a lot. It's true that some episodes are a bit formulaic but there are just as many that really stand out thanks to some decent guest actors as the runners, and there's some very creative escapes too (one of my favourites is two guys hiding in the coffin of a hugely fat (and dead) prisoner they had previously disposed of) but there are lots of other great (and sometimes amusing) efforts.

One thing that did occur to me while watching was how else the concept behind the show could've been approached. It might've worked just as well, perhaps even better, as a serial with each season just focusing on the hunt for one particularly cunning/elusive con, for example - kind of like the flip-side of Prison Break's second season - but I suppose it's a bit pointless thinking what the show could've been. Besides, that approach wouldn't give our team many months off either! Oh well, it might've been short-lived but Breakout Kings was building into a really good show. A word of warning though - it ends on a cliffhanger. Grrrrr!