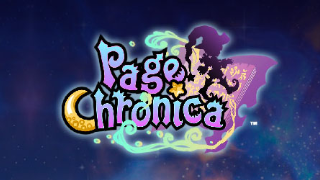 Being a librarian must be a pretty decent job. You get to sit around reading interesting books in peace and quiet - something I think I would enjoy a lot. I guess it's not the most exciting way to spend the majority of one's waking day though, and one young lady who definitely feels that way is Topez, the star of this intriguing indie release from Singapore. She's an apprentice to Morpheous, the 'Lord of Dreams and Master of Stories', who resides in a place called the Infinite Palace which contains all the stories that have ever been dreamt. Despite her talent and promise, though, Morpheous just leaves her to tidy and organise the many special books. That is, until one day while doing her chores she found a mysterious book she had never seen before, bound in chains. 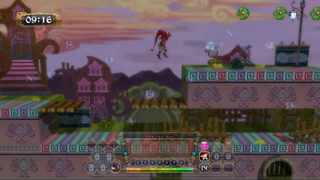 Boredom and curiosity got the best of her, of course, and she opened the book, accidentally releasing The Big Bad, a shadowy spirit who was confined within! Ecstatic to finally be free to cause havoc, the spirit then transported itself into another book. Unwilling to take the blame for another mess, Topez transported herself into the same book in pursuit. What follows is a fairly basic side-viewed platform adventure, but with a twist: drifting through the background of the picturesque worlds found in the books are the letters that make up the words of the story. Holding down a shoulder button slows down time and allows you to see the letters. You can then pick them out and 'select' them with a crosshair, spelling out words to give Topez specials powers! 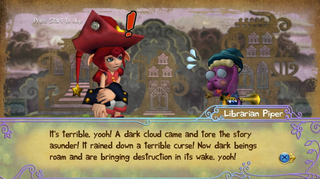 Actually, the powers aren't that special - they include the ability to fire sparkly projectiles and perform double-height jumps - but they are essential to get through the game. Both powers only last for a handful of uses, you see, so regular word construction is required to conquer the stages of which there are 18 spread across four stories. The first three are inspired by the Piped Piper, Jack and The Bean Stalk, and Hansel and Gretel while the last takes place in the Infinite Library of Dreams, with the exit of each being guarded by a large boss. These are very tough but the difficulty of the actual stages depends almost entirely on your ability to quickly spot and spell out words to keep Topez's power up - if you're good at this you'll basically have infinite shots and high jumps. 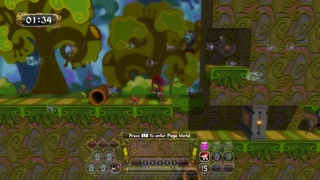 If you're not particularly good at this, however, you'll have a good few problems - the strange floopy enemies, the high platforms, and the wide gaps will all be impassable for starters. On top of that, each stage also has a ten minute time limit which can cause many a panic as you frantically try to think up a word to spell out using the letters available. The jiggly wordplay is quite a novel concept and sounds good in theory but sadly it's actually a bit of a chore. The platformy aspect of the game is rather basic too. It kind of reminds me of any one of those PS1 2.5D platformers, particularly Pandemonium (except you can't jump on enemies to kill them), but back then these games could get away with having unspectacular gameplay as long as they had flashy 3D graphics. 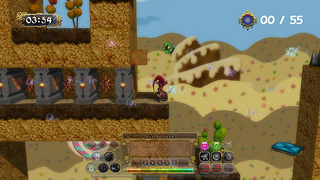 The graphics here are probably a little sharper than most found on the PS1 but are otherwise fairly average compared to similar titles. Aside from the large and impressive bosses, the enemies are strange things and not very appealing but Topez herself looks quite good (although I don't like her standing animation), and it's surprising to find a game with a female lead who isn't half-naked with giant boobs! Some of the backgrounds are quite nice too, there are some pleasant fairy-tale style cut scenes, and the music is mostly superb, but nowadays most gamers demand a bit more from this type of game. That's where its gimmick comes in but, unfortunately, this proved to be the least enjoyable part of the game for me. Page Chronica sounds interesting in theory, and it does have some good ideas, but the game built around them needed a lot more work.