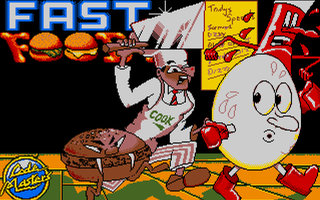 The spin-off games featuring Dizzy were never as well-received as his 'proper' games but Fast Food was still a fairly enjoyable Pac-Man clone in occasional doses. Well, for us 8-bit users at least, who could pick it up for a couple of pounds. A few years later, however, it was ported to the 16-bit monsters as well and, rather than just being tarted-up a bit as was usually the case, the simple audio/visuals were instead given a complete overhaul. So much so, in fact, that I decided it was worth taking a quick look at these versions of the game too! As you can see, rather than basic and repetitive monochrome mazes, the stages are now based in all-new living, breathing, real-life locales, positively brimming with features and detail! And we all know that fancier graphics make games better, right? 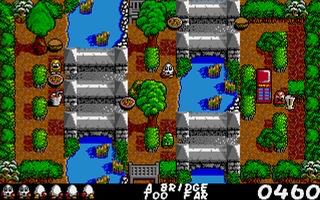 That is of course utter poppycock usually, but it does do the game a lot of good in this case. Although for 16-bit standards, the graphics here aren't technically amazing, they are many times better than the 8-bit versions which featured a series of square monochrome mazes with seemingly random bits of wall dotted around. As well as having more colours, the stages in this Amiga version (and the PC and ST versions which I also tried) are much more interesting. There are 40 of them in total, divided into four themed worlds - Park, Supermarket, Toytown, and the lair of 'the wizard', presumably Dizzy's usual foil, Zaks, which is locked until you've finished the other worlds. If you manage to get through all of them, the game returns you to the beginning, but with... upside-down stages! They really do look quite nice too, particularly the first world which features lovely greenery and ponds and bridges and stuff rather than just endless walls and corridors. 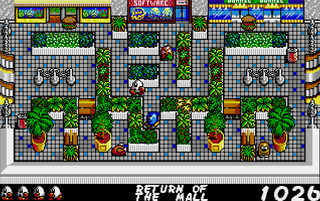 There are also some great tunes to accompany the action this time too. Sadly, however, one of the problems of the 8-bit versions hasn't been rectified here - the difficulty. Indeed, I got about two-thirds of the way through on my first ever try and I'm confident I could get through the whole game (once, at least) without too much effort. The same four enemies as before are included here (although they don't look as amusing), and some of them are pretty fast/smart, but it's usually easy to outfox them, especially when the special barriers start appearing that only Dizzy can pass through. Add to that Dizzy's faster walking speed and the plentiful supply of extra lives (three per world) and you've got a simple, enjoyable, but similarly flawed game as before. It was still a budget game though, so it was good value back then, and it does look (and sound) much nicer.