For young scamps growing up in the UK in the 80's like me, there were a good few choices with regard to playing these fancy computer games we kept reading about. In my experience the most popular choice was the trusty ZX Spectrum but there were also a good few Commodore 64's and Amstrad CPC's doing the rounds and even a few less popular examples such as the Acorn Electron, Dragon 32, or one of the numerous MSX models. However, whichever choice you made (or had made for you), there's a good chance that the first time most of us used a computer it was none of these. For most, our introduction to computing was with a BBC at school.

Although most commonly known simply as the 'BBC Micro', it was actually designed and produced by another British company - Acorn - who beat several other computer manufacturers (including Sinclair) to the rights to build the machine for the BBC's Computer Literacy Project. The result of the unlikely collaboration was initially available as the 16kB Model A or the more common Model B which came with either 32kB or 64kB of RAM. The Model B was unsurprisingly the one found in my school's classrooms and it was probably (although I can't be sure) the first real computer I ever laid my grubby mitts on. Unfortunately this was mainly for educational purposes but on the odd special occasion our teacher did allow us to play a game - the only game they had, in fact - Granny's Garden, although even this was a game with an educational slant (those crafty teachers never miss a trick, do they?). Alarmingly, this remains the only BBC game I've played.

Another glaring oversight to rectify with the help of Red Parsley then, but where to begin? Naturally, there are a few BBC titles I've heard of, or at least games I've heard of which are available on the BBC, so they were an obvious place to start, and I've also made a couple of random selections too. So, after all these years I guess the big question is: was the BBC able to hang with the big boys or should it have stuck to amusing snotty children in the classroom? Let's see! 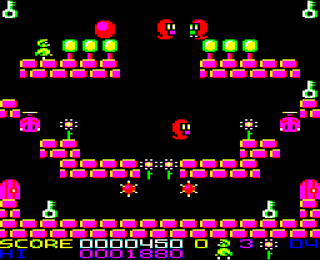 I've already taken a look at the Amiga version of this amusing and colourful platformer so it seemed like a great title to introduce me to the BBC's gaming abilities. This is actually the original (and far lesser known) version of the game before it was revived by Team 17 but it's easy to see how the one came from the other. Although the end-game is unclear, the object is to guide a cute green duck through twenty-odd single-screen stages. However, each contains several keys which must all be collected before the pesky exit door will be unlocked. This BBC original is noticeably harder than the Amiga version - most likely as it understandably contains far fewer stages - but, like the other versions, it's also an enjoyable and addictive game. The duck himself is a bit bland, lacking the appeal of his later incarnations, but he moves quickly and accurately around the stages which are impressively colourful and there are tonnes of things to collect for high-scores too. Good fun and a very positive introduction to the BBC! 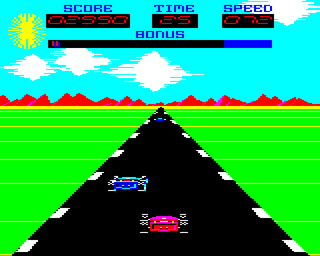 Into-the-screen driving games are a test of any machine's technical abilities so I approached this one with interest. However, it was quickly apparent that Overdrive is among the least demanding such games I've ever seen! As you can see, it's certainly very bright and colourful to look at, and it gets pretty fast if you manage to build up your speed enough too, but it suffers from one major problem - there are no corners! That's right, what you see in the screenshot is pretty much all there is to this simple game. You just accelerate and press left or right now and then to avoid the other cars. If you pass a certain number within the time limit you'll move to the next course which is far less colourful (I think it's meant to be a night-time race). If you hit any of the other racers you'll blow up and, annoyingly, the other cars will continue as before while you're getting back up to speed and they often drive through you from behind. This made me angry but it is quite addictive... for a few minutes at least. 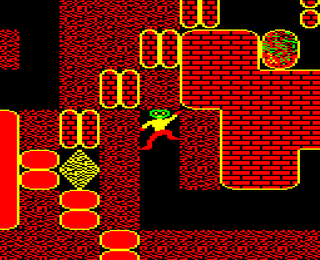 Despite receiving conversions for tonnes of other systems over the years, I've always identified this famous game as a BBC title... but never played it until now. My first impressions of finally doing so were very positive too. The controls are even simpler than I expected - the distinctive lizard of the title can be moved in four directions but that's it. All that's required is to steer him around a series of underground mazes, avoiding falling rocks and collecting all the diamonds in each within the (invisible) time limit before moving to the next. It gets tough quickly though, thanks to the super-fast monsters found from stage two onwards, and even without them it's easy to mess up and find yourself in a no-win situation (luckily there's a 'suicide' button so you can start again!). It's certainly an iconic game, mainly down to its appearance which I like a lot - the stages are largely monochrome but have a nice style, and the curious-looking hero is awesome! There's also a stupidly catchy/repetitive tune that plays throughout. It was great to finally play this though, I imagine it would've been one of my favourites. 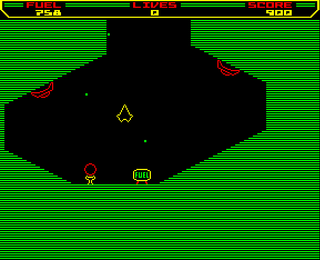 As you might've noticed, I've been looking into these 'gravity games' recently and this one is among the most famous. Like Repton, it was originally a BBC (and Electron) exclusive before being ported to a few more popular systems but it's still thought of as a BBC game, and it's another one I hadn't played until now. It turns out, however, that I almost have played it as it's actually a clone of Gravitar. That means there are various planetary surfaces and subterranean caverns to navigate with a small rocket ship which numerous gun turrets are trying to shoot down. Unlike Gravitar you don't have to shoot them (although you can) but instead collect a 'pod' of some sort and return it to the heavens, all the while combating the increasingly challenging passageways, as well as the gravity itself, whilst conserving fuel and/or collecting more. It's a mostly silent game to play and, again like Repton, the graphics are mostly monochrome and include irritating push-scrolling, but it's mighty enjoyable too. Better than Gravitar? Maybe... 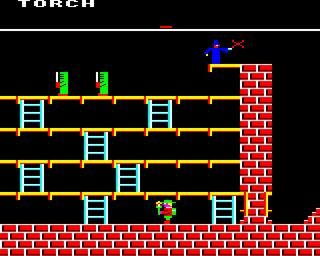 While it's certainly true that many games were very difficult in the early days - a necessity brought on by hardware limitations - there still weren't too many games that actually boasted about it. One that did is Castle Quest which stated proudly "Probably the most challenging game ever devised for the BBC Micro" not only on all the adverts but even on the title screen! I'm not sure its difficulty is worthy of that much attention but this sure is a tough little platformer in which you simply have to find the wizard's treasure somewhere in his castle. To do this you need to find and use a number of items to overcome the various obstacles which mostly include enemies like trolls and what appear to be kendo swordsmen. It's not a very long game though, and I didn't find this the most enjoyable of my selections. Technically it's not that impressive either. There's no music and the graphics are not noteworthy other than some very smooth scrolling. It's not a terrible game but I can't imagine it ranks too highly among fans.

Verdict:
It's amazing (and terrifying) to think that it's been about 25 years since I used a BBC Micro, but even then my time with it had consisted of little more than trying to make databases and larking around with BASIC (10 PRINT "Boobies", 20 GOTO 10 - hee hee!). As far as I'm aware that's always been how most people around my age have regarded it too - as an educational tool bereft of anything remotely approaching fun or entertaining - but was the poor old BBC unfairly overlooked in this regard?

Well, let's not forget that Acorn already had their Atom available, and the Electron followed hot on the heels of the BBC, and both were seen more as gaming computers than anything else. Despite this, it was well known that there were some games available for the BBC, but it was never seen as being anywhere near as game-centric as most other systems around at that time. I suppose this was simply down to the stigma of anything remotely associated with that stinky school place because, as I've discovered, it was a machine more than capable of producing games to equal most of the other systems available. Its audio abilities don't appear to be much better than the poor old Speccy's bleepy-bloopyiness but I really like its graphics which consist of up to eight colours at once from a palette of sixteen. That put it on a par with its contemporaries but the colours seem to be particularly vivid to me too.

From a technical standpoint then, the BBC was more than capable of doubling as a gaming system, and clearly, as I've already seen, it had some great titles, but were there enough of them? Almost certainly not. All the games magazines I used to read obviously featured lots of adverts for games but these were rarely listed for anything other than the Speccy, CPC, and C64 (as far as the 8-bits were concerned at least). This was perhaps due in part to the BBC's price - the Model B would set you back £335 at launch, already more than its competition, but its price was then increased to a wallet-busting £399! With such cheaper alternatives available, why spend that much on something that had less games to choose from?

Oh well, capable or not, with a few exceptions the BBC remained an educational tool and would remain beyond the reach of most as far as its games were concerned. There are a surprising number of titles to be unearthed, though, which were either exclusives or at least in their prime on this format, so it's well worth looking into today if you missed out back then. I know I'll be spending more time with it...