Crikey, I was supposed to be breezing through these SG-1000 titles but it's been over eight months since my last visit to Sega's jaunty little system. Oops! Oh well, better late than never! The five games I've chosen were again randomly picked so, with that in mind, there is once again some nice variety - a scrolling fighter, a classic platformer, a vertical shmup, an overhead shmup, and a racing game. Read on to see which of them are great and which suck donkey balls :) 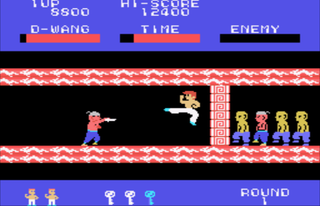 As 'hard' as it is to believe, this game is probably more famous for its humorous name than anything else (chortle). It was actually a late release, coming only a couple of years before its better-known sequel, Kung Fu Kid for the Master System. As limited as the MS game is, though, this prequel is even more so. It places you within an enclosed, multi-tiered stage in which you must collect three keys to escape. Each of these is held by a boss character at various locations around the mazey place. So far so good, but there are a few problems. First of all, Mr. Wang, if indeed that is his name, has a solitary attack move - a kick - which means it gets boring quickly. Secondly, it's very difficult (and I have little affection for hard wangs - hee hee!) - something not helped by the super-jerky scrolling and rather sluggish controls, and something definitely not helped by having to start that key-collecting business from scratch each time you lose a life! Grrr! ... 4/10 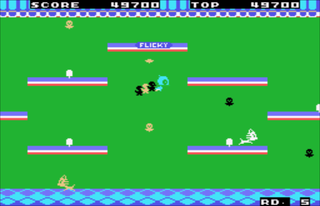 Yes that's right! Despite its age I was still surprised to find a port of this classic platformer on the SG, and it's not a bad one either. In case you've never experienced the wonders of Flicky, the object is to steer the bouncy bird of the title around the looping, side-viewed stages collecting all the chicks (or Piopio) and leading them to the exit without getting caught by one of the cats (or Nyannyan) prowling the platforms. It's a fast-paced game where mistakes are often punished immediately and harshly but it's also good fun and rather addictive too. The trouble is, having gotten used to playing the splendid MegaDrive version, I don't really have much reason to play this version. It is a decent effort for Sega's least powerful machine though - it even has the bonus stage - so is well worth playing for any SG fans... 7/10 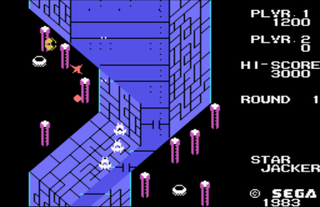 Any game starting with 'star' back in these early days was likely to be a shoot 'em up and, sure enough, this one's no different. It's a vertical-scroller in which you have four lives to shoot the crap out of... whatever the stuff is that you can shoot. The twist is, you get all four lives at once! Indeed, your teeny little ship is followed by three identical examples which form a snake-like shooty column of ships. Each one that gets hit is lost and your arsenal is diminished by one shot until there's none left! The ships can shoot appropriately tiny forward shots but can also drop bombs to take out stuff on the enemy bases when they appear. It's quite a nippy game with fast and accurate ship control and the enemy ships and bullets whizzing around the screen. Even the music is upbeat, although it's also quite annoying after a short while. Not the best SG shooter but a fairly enjoyable one all the same... 6/10 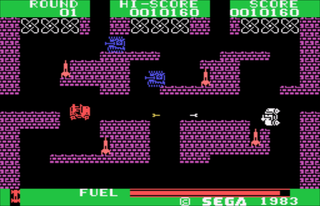 I had absolutely no idea what to expect with this one but it seems that it's a conversion of one of Sega's own early arcade titles. It's also apparently an 'intellectual game', according to its packaging, which consists of four overhead viewed stages through which you control a red jeep. Using this you must destroy all the white swirly things found on each stage whilst avoiding or shooting the enemy jeep and tanks which are gunning for you. They soon return though, so hiding from them and making hasty dashes for cover are probably the best options. The first stage is like a shooty overhead racer while the other three stages are more akin to a single-screen overhead maze shooter - if you complete all four the game loops back to the first stage but with a higher difficulty. Each stage also features a number of red missiles which can be shot for bonus points so there's plenty of chances for high scores. It's an addictive, varied game featuring appealing Speccy-style graphics, a catchy (but repetitive) tune, and responsive controls too. I really enjoyed this one... 8/10 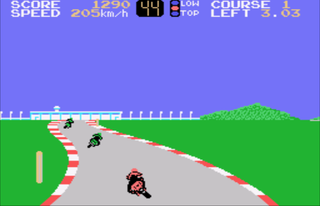 This one must be the most obscure game to bear the famous name and, strangely, it was apparently intended as a sequel to the Mark III/Master System release - the system that succeeded the SG-1000. Can't say I've ever heard of a sequel on a previous generation's hardware but still. It's pretty much identical to the MS game too, and that means racing your three-geared bike through a succession of repeating stages with only the clock to beat. Obviously the graphics and sound aren't quite as spiffy here (although they were hardly state-of-the-art on the MS either) but they're actually not bad considering the limitations. The game itself is tougher than the 'prequel' and requires much shifting up and down gears to avoid the side of the road and other bikes (you'll blow up if you touch any - they're fine, of course) but it's also addictive and pretty good fun. Stick with the MS version if you have it though... 7/10

Red Parsley will be back with some more SG-1000 mini-reviews soon! :)