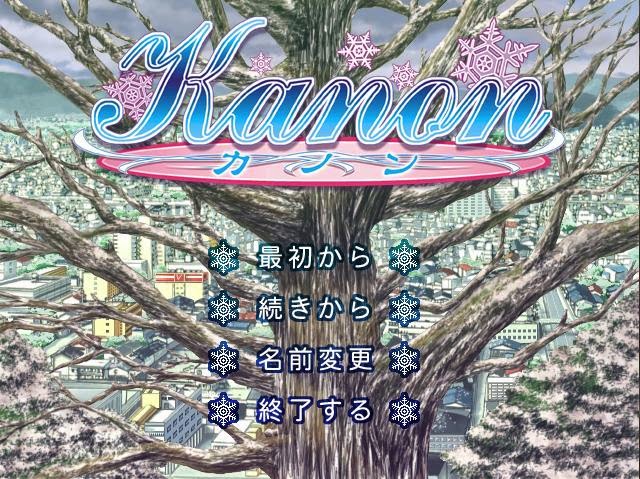 Like many of us 'Westerners', the wonder that is anime became known to me upon the arrival of the mighty Akira in the late 80's. I quickly became a fan but my pursuit of this interest has been sporadic over the years, due partly to the unreliability of finding ones that I think I'd like. I've bought and watched a decent number of shows though, as well as most of Studio Ghibli's amazing films, but only in recent years have 'visual novels' come to my attention. As I've been discovering, these are basically a cross between manga and anime - the story is most often played out in the form of a succession of static images or very short, simple animated sequences with accompanying dialogue, sometimes spoken but usually just on-screen text. Every now and then you get a choice of things to say which then affect the direction of the story and your relationships with the other characters.

Sounds simple enough! The first example that came to my attention was Kanon which, as far as I'm aware, is also the most successful such title to date. It casts you as a male high school student called Yuichi Aizawa whose parents have gone to work abroad. Unwilling to let him live alone, they instead send him to live with his auntie, Akiko, and his cousin, Nayuki, in the north of Japan. The novel starts the very day he moves in which is the first time he's been back there for seven years after spending some childhood years there. He has little memory of the people and events from back then but slowly regains some of his memories as the game progresses. Of course, like most visual novels (it seems), the main characters he interacts with while doing this are female. In fact, besides Yuichi there are only two males in the whole game, both minor characters, compared to nine females!

Of these nine girlies, five are main characters who have their own 'route' through the game, and the first one you meet is your blue-haired cousin, Nayuki, who recalls Yuichi's past years in her town better than he does. She has a very close relationship with her mother, loves strawberry flavour jam and desserts, and is terrible at waking up in the mornings, even falling asleep at school on a few occasions! She's also probably the character you'll see the most, mainly because Yuichi lives with her and goes to school with her but for some reason she's not the character that most of the marketing/promo stuff featured. Much of that featured Ayu, a small but energetic girl recognisable by the wings on her backpack. She attends a different school to Yuichi and Nayuki and is most often found hanging around the shopping centre where she's apparently lost something, though she can't remember what.

The other main characters include Makoto, a strange, orange-haired girl who suddenly attacks Yuichi in the middle of the shopping centre because she hates him, but can't remember (or won't say) why. Apparently she's lost all her other memories as well and so comes back to Yuichi and Nayuki's house to stay until she remembers where she actually lives, making Yuichi's life a misery in the process due to her love of playing pranks. The other two characters are Shiori, a meek girl who's rarely at school due to an unspecified illness, and an older girl called Mai who we first meet alone at night in the school building brandishing a sword. Silly rabbit, Trix are for kids! As you may have gathered then, the five girls are rather different from one another and each has her own story and problems. You can concentrate on whichever of them you choose although you'll usually see intermingling parts of other stories as well.

This all places a lot of importance on the appeal of the characters and story though, obviously, and that's where Kanon disappointed me a bit. The girls themselves are pretty appealing for the most part, especially the two most featured characters, Nayuki and Ayu, and all of them have their quirks and ways of talking. Unfortunately, the character you play as is rather less appealing. Yes, you can choose what he says now and then, but the rest of the time he's actually a bit of a dick in the way he talks to people and treats them sometimes. The other problem I found is that it's just not a particularly interesting game, at least to start with and for a good while. The game begins on January 7th and runs until the end of that month, but for about the first half of that time you're mostly just doing the same things over and over.

Any game like this must surely need an engrossing story but here it's all very vague (boy moves back to town, doesn't remember much) and almost every day is more or less the same - get up, have breakfast, go to school, go to the shops on the way home from school, have dinner, go to bed... conversations with some of the characters take place between these events but they are rarely very interesting and other than those it's still the same stuff every day. I actually almost stopped playing it - only my dedication to posting an informed review here kept me going, but it does pick up after a while and eventually I was indeed engrossed. The graphics are pretty nice too. Of the numerous differing styles of anime artwork, this type is among my favourites. The locations are nicely drawn and the girls all look lovely. The only trouble is that there's not really enough variety.

There aren't too many different locations and each girl only has a handful of different expressions and/or poses. It's the same thing with the audio really - there's no spoken dialogue (although I believe voices were added to the console versions) but there are incidental sound effects and various different pieces of music (each girl/place has its own theme), there's just not really enough of them. Still, what's here does look and sound nice, and if you're prepared to stick with it you should enjoy the various stories as well, each of which ends with a bit of hanky-panky, by the way, although this can easily be removed (see below). Despite this unnecessary content, the game does its best to pluck at your heart strings with its moments of drama, it's just a shame it takes so long to get started. I'm glad I stuck with it though, and it's definitely left me eager to try out another similar title. Watch this space!

Special Note: Yes, technically this is an 'adult' visual novel, but the inappropriate content is brief and at the end of each girl's route, and there really isn't much here that can't be found in most anime shows anyway. The girls' most sacred areas are even censored! Plus, there's an 'All Ages' patch for the game which removes the few saucy pics without affecting the stories, and it was removed to begin with from the console versions. If you're looking for one of those crazy hentai/eroge games, this isn't the best option for you!