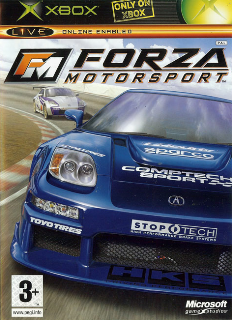 My introduction to Xbox gaming came recently with Ninja Gaiden which was good but far too difficult for a wussy like me (it must've been designed by Chuck Norris) but regardless of its quality it was never going to take me long to buy a racing game for my green box o' tricks and, very splendidly, I found this, the first game of the Forza series, in my local second-hand shop for a mere £1.50! Unusually for me I even tried it out as soon as I got home from work. I selected a mighty Aston Martin DB9 and went for a spin on the arcade mode only to find that... this game is also difficult! In fact, it reminded me of the hardest racing game I've yet played - F355 Challenge. Both are closer to racing simulators than arcade-style games and as such both have numerous driver-assist options which are all active by default. Here these include anti-lock brakes, traction control, stability control, and an on-circuit racing line (complete with braking zones). I tried turning them off which obviously made things more difficult (though not nearly as much so as F355) but even with them turned on I was having trouble staying on the track for more than ten seconds at a time! Nonetheless, I soon also gave the career mode a try since most of my time would be spent there anyway.

This begins in much the same way as every such game since Gran Turismo - I had a bit of cash to buy my first car which I could then enter in races to win more cash. Most races have conditions (rear-wheel drive only, Japanese cars only, etc) but, surprisingly, there are no license tests or training modes or anything. I did find the going quite a bit easier with my less-powerful Audi TT though, and was doing fairly well (even winning two new cars including a decent Toyota Celica!) until... I reached a ridiculous Tokyo street circuit which enraged me with its corners so tight that my car could barely even go round them without performing a three-point-turn!

This is also the type of game where making one major mistake (i.e. spinning your car) pretty much ruins your race. I suppose it's fairly realistic but the other cars don't seem to do it very often and it doesn't make the rest of the race much fun! On top of that, the cars here can be damaged here too (unlike most similar games). You can't totally wreck them but it's easily possible to mess up their handling so I couldn't even smash my way around the corners on the stupid Tokyo circuit! Oh well, it looks like a great game anyway, and one with a lot to do. There are tonnes of races and competitions, hundreds of cars, all sorts of tuning and modification options (including a decal-editing tool), as well as an online racing mode (probably not active anymore though) so I'm sure I'll be racing for a good while yet, but I have a feeling at least as much time will be spent frustrated as entertained! 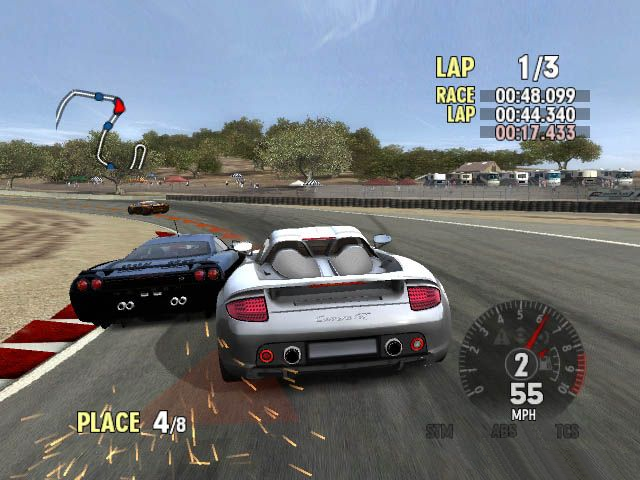