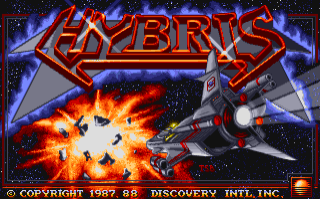 It was many moons ago now that I took a good look at the various shmups available on Commodore's 16-bit monster and I ended up making what I believed at the time to be a fairly well-considered and definitive Top Five list. However, since the moment that post was made I've been hearing regularly about a game that did not feature in my list; a game that I didn't really know of and therefore didn't even consider, no less. That game is unsurprisingly Hybris which, as well as being popular with the Amiga fanboys, is also in fact the prequel to one of my existing favourite vertical scrollers - Battle Squadron - which was released on the Mega Drive as well as the Amiga. The version on Sega's powerhouse is superior, obviously, and that was the version I had, so what will I make of its Amiga-only predecessor? 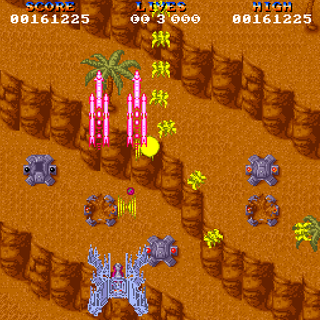 Like its sequel, Hybris is a vertical-scroller, and it looks like a very promising one to begin with. You're given a choice between two brave commanders - Maverick (male) or Lovett (female) - but both fly the same winged vessel which is of a reasonably shmup-ish design and fires a twin shot from either side of its cockpit. The enemies consist of many small and similar-looking craft who appear in groups of one colour or another, the colour denoting their formation/movement pattern. Numbering almost as many as them but far less mobile (not mobile at all, in fact) are the ground-based gun emplacements which are open to normal attacks to begin with but later on many of them have a pesky wall shielding them so you have to try and nip in and pop off a shot from point-blank range in between the gun's own shots, and they fire more frequently as you progress too. Far less common are formations of larger, stronger ships and there's also a large boss ship that turns up about half-way through each stage. It runs away before you can destroy it though, and then returns at the end of the stage (fully repaired, of course). Defeat it again, and properly this time, and you'll move on to the next stage. 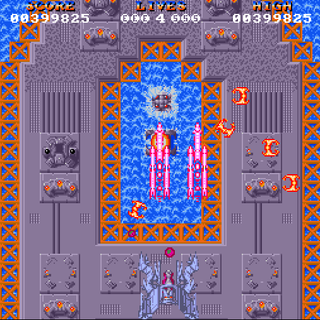 There are only three of these and the first two are quite similar, taking place over a rocky, dusty terrain (Arizona, perhaps?) before moving on to a coastal area and open water, the latter more as the stage progresses. Both of these stages feature the same enemies but the last stage takes place over a strange, alien landscape which is filled with many unique and scary features. Your laser-dealing ship o' death has a couple of interesting features too. As mentioned, it has wings but they're quite dainty - a single hit will smash them off which will halve your firepower. As long as you have them, though, you're able to incorporate one of the numbered power-ups which drift up the screen in large boxes every now and then. Your ship is equipped with '1' as default; weapons 2 - 5, however, consist of various similar but increasingly more powerful forward shots including lightning, green slime stuff, and the most powerful of all - the mighty red lasers seen above which also fire backwards. In addition to these, you also start the game with three 'S' icons, which unleash swirly fireball bombs, and three 'E' icons which temporarily increase the power and range of your main shot - ultra handy for busy sections. 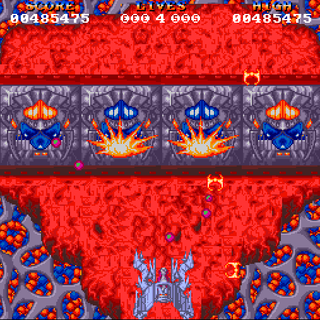 These 'E' icons are about the only remotely original feature that can be found here but, as a big fan of arcade and console shmups, Hybris has a much more important quality than originality for Amiga owners - it's actually pretty good! Graphics and sound are both pretty sweet but neither are varied enough - the latter consists of a great tune which plays throughout, but it's the only tune, while the former features nice, detailed sprites and backgrounds but not enough of them. The insect-like airborne enemies are the same on each level, for one thing, but they are quite cool with their many colours and distinctive formations, and I particularly like how they're destroyed - they just kind of 'phase' out of existence rather than blow up and it just encourages me to shoot as many as I can, especially since the explosion sound is rather satisfying as well! The background is really nice to start with too, but the stages are loong for shmup standards and the orangey-brown ground/cliffs do get a bit tiresome after a while. Worse still, stage two, whilst taking place partially over water, also features the same dusty landscape. 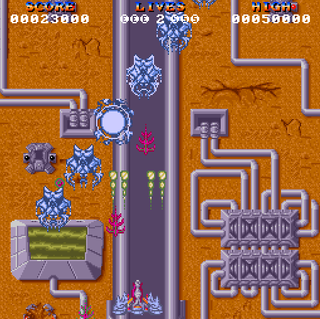 The third and final stage, however, definitely does not look like the previous two. Indeed, it seems the enemy's plan, much like in Battle Squadron, includes dazzling you with eye-melting backgrounds, presumably so you crash into stuff you can't see. Okay, it's not quite that bad but jeepers! Whether you're likely to get that far, I can't really say. Hybris isn't an overly tough game, what with the fairly generous restart points and all those attack options, but the power-ups also make your ship progressively larger by bolting on pieces of what looks like tin foil (which also make it mighty ugly if you ask me) making it easier to hit, and even if you do manage to best the last stage without suffering scorched retinas, you just get sent back to the first stage again. Bah! This game has definitely been a pleasant surprise though. For its few minor faults, it is great to play and succeeds in that precious quality so lacking in many shmups on the home computers - smooth, arcade style blasting! Compared to the best efforts found on the MegaDrive and particularly the SNES it would be pretty average, but on the Amiga? It's fantastic and perhaps the best example to be found.