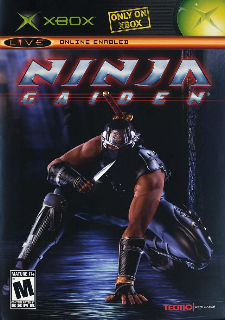 As was gloriously revealed last week I recently became the owner of a spiffing green Xbox thanks to my beloved wife and, prior to leaving for our New Year holiday (on the way to the airport, in fact), I bought this very game with which to try out my new console when we returned. It's been sat in the glove box of our car in the freezing airport car park for two weeks but, upon returning to the UK I ate a pizza, then got some sleep, but my next priority was... to slash stuff up ninja stylee!

Like the earlier platformy games to bear the name, you take on the role of master ninja, Ryu Hayabusa, who is slightly miffed to discover that his clan has been slaughtered by the evil Vigoor Empire. He of course vows revenge which, unlike the earlier games, takes the form of a 3D action adventure. The quest for vengeance begins in a mountain pass where it's immediately apparent that Ryu is somewhat more agile than before. As well as a sword to swish around, he can fling shurikens, adopt a blocking stance, unleash a special attack, and, as you would expect of such a character, he can also perform all manner of leaps and acrobatic tricks.

These seemed fairly easy to execute too, which was encouraging, and the few ninjas encountered up to this point were swiftly dispatched. Before long I'd entered the fortress, however, where the enemies began to increase in number as well as difficulty, and it soon became apparent that this is a savagely tough game! What little I've seen of it so far is well-designed and looks pretty, and there are apparently lots of weapons and items to collect and use, but I don't know how many of them I'll end up seeing. My first taste of Xbox gaming has been largely positive but I could've done with being 'eased in' a bit. Time for more practise I guess! 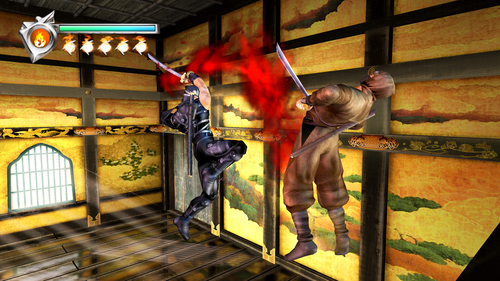