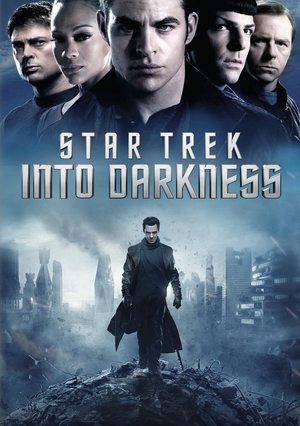 Well, for better or worse, the Star Trek movie series returned all shiny and rebooted with 2009's decent effort. Most critics approved while fan opinion was polarised. Nonetheless, the result was the most successful instalment in the long-running franchise so far which made this sequel inevitable. It was extensively promoted and looked like it would offer more of the same but bigger and better. Happily, all the Enterprise cast return here and we rejoin them a year after the events of the previous film where Captain Kirk (Pine) is busy flouting Federation protocol by attempting to save a primitive culture from a super-volcano that's threatening them. Upon returning to Earth he finds himself demoted for violating the Prime Directive with command of the Enterprise returning to Admiral Pike (Greenwood). Soon after, however, a series of terrorist attacks forces Starfleet to re-evaluate Kirk's position.

The terrorist is soon named as a Starfleet special agent, Cdr. John Harrison (Cumberbatch), who has escaped Earth and is hiding out on Kronos, homeworld of the Klingon Empire with which the Federation is not on the best of terms. The answer to this dilemma? A covert mission, perhaps commanded by a reckless but determined young captain? If only there were such a hero! Cue the newly-reinstated Captain who is ordered by Admiral Alexander Marcus (Weller) to take the Enterprise to the edge of Klingon space and fire off a volley of prototype photon torpedoes to take out Harrison, then hightail it back to Earth as if nothing happened. It doesn't quite go to plan of course. Or does it? As chance would have it, the Enterprise, straight out of the repair shop, suddenly conks out right at the edge of Klingon space.

There's no Scotty to perform his miracles on this occasion either, so it's down to the promoted Chekov to get the ship underway. Sure enough though, before he manages that the vulnerable vessel soon has company, but not in the form you might've expected. Basically then, we have another spacey shooty action film - if anything, even more so than the 'first' film, probably since there's no need to introduce the main cast this time around. Kirk and/or Spock dominate most scenes as you would expect and, as well as reminding you how well they were cast, they remain the most interesting crew members by far as well. Pegg's Scotty now uses noticeably more Scottish-isms (perhaps he received criticism after the first film for not being... Scottish enough) while Karl Urban continues to do his best DeForest Kelly impersonation.

Chekov is even more hyperactive than before and continues to be used as a source of comic-relief as he frantically dashes around burbling away with his 'amusing' accent. The lovely Uhura doesn't get much to do once again besides stand around looking pretty, with her best moment coming on the Klingon homeworld while chatting with the angry (and redesigned) buffoons. Sulu is just as under-utilised but he does get to sit in 'The Chair' and even issues a scary threat as though he's been there for years! There are a couple of additions to the cast though. Joining the crew as science officer Carol Marcus is Alice Eve who just happens to be an attractive, big-boobed blonde. I'm sure it's also just a coincidence that she has a completely unnecessary underwear scene too (although, being a typical woman, she strips off in front of Kirk then complains that he's looking at her!).

Back on Earth we meet Alexander Marcus who does a good job as the warmongering Fleet Admiral, and then there's that much-publicised 'bad guy'. Of course, as soon as I saw the word 'London' appear on the screen I knew he would be English, or at least have an English accent. Enter Benedict Cumberbatch as a genetically engineered superhuman awoken by Admiral Marcus from a 300-year cryosleep to develop advanced new weapons. With a majority of the cast returning from the previous film, this was by far the most important role to cast in the new film and, while Mr. Cumberbatch is a great actor and makes a decent bad guy, I'm not certain he's the right choice for this bad guy. You'll know what I mean if/when you watch it. Setting aside the basis for the character though, he does make a worthy foil to Kirk 'n' Spock. The most impressive aspect of the film is easily its visuals though.

It really is wonderful to see Star Trek with these kind of production values and amazing special effects - the new transporter and warping effects still look awesome (and scary), there's a couple of great shoot-outs (one of them at warp), a superb 'space jump' sequence, and there's even an awesome shot of my favourite planet, Jupiter. It careers from one set piece to another with bits of expositional dialogue in between and rarely fails to thrill. The music is also superb - I'm very fond of the new theme (which of course is now interspersed with the older music) and it adds a lot to the feel of film. There has, however, been much hype and controversy over the basis for its story and I share many of these concerns. I'll try not to give away any spoilers (although I suppose it doesn't really matter at this stage) but I will say John Harrison isn't the real name of the film's main antagonist - he's actually a reworking of one of the most famous villains in Trek history, and that's something I found really disappointing.

It's not just the character either - several other aspects of Trek lore have been 'borrowed' here (and from one film in particular); some are used for inspiration, others are copied almost exactly - Spock's 'needs of the many...' line has already been used, to give a non-spoilery example (and I'm sure they could've found a better use for it if they'd been a bit more patient), and Spock's angry scene in the engine room near the end just makes me cringe, quite honestly. I just don't get it. Is Into Darkness meant to be a semi-homage? While it's nice the adventures of the original, legendary crew are honoured, I can't imagine that was the reason for the reboot, and such an expensive one too. Everything does look and sound amazing (as mentioned) but Abrams & Co have missed a great opportunity to continue forging their own path - why re-use old Trek stuff when we're supposed to be in an alternate timeline - they could've done anything. What's next - a reworking of other films or characters?

If you can overlook all that stuff (or don't really care about it), however, Into Darkness is a great movie in it own right. The terrorist theme makes it relatable to some extent and the story is intriguing enough to keep you going between the numerous action scenes. The fortunes of Kirk's character were handled particularly well - it didn't take long for him to get in trouble with Starfleet in this timeline and, sure enough, he's soon shagging his woes away with two young ladies (with tails), during which the Beastie Boys are playing, curiously (are they 'classical' in the future?), and getting drunk in a bar before being talked around by Admiral Pike once again. He even has dealings with a Tribble (indirectly)! Overall though, this is a tough one to evaluate.

It's a fantastic, brash, exiting sci-fi-shooty-action movie to be sure, much more so than Trekkies (or Trekkers?) are used to I suspect, and accordingly there's the odd plot hole, unexplained coincidence, and inconsistency, but if you're not bothered by the reused stuff, or if you haven't even seen old Trek to know that it's reused stuff, this is a solidly thrilling popcorn movie. I don't know why something a bit more original wasn't conjured up, though - with the talent (and budget) involved, it was certainly possible. Why go to all that trouble to rewrite Trek history, risk the wrath of the Trek fanboys, only to rehash one of their most treasured characters? Who knows, but I guess it doesn't matter now - Into Darkness may have divided the opinions of sci-fi fans even more than its predecessor, and there were some scenes I didn't like, but it's still a very entertaining film throughout its entire running time (almost). I do really like this crew, but if they return I hope it's in an original story.