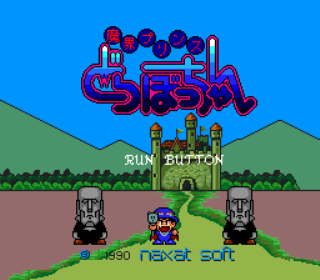 Despite their recent resurgence in popularity, there still aren't too many vampires in the vast world of video games. The most famous ones can probably be found in the many Castlevania games but this little-known title features another. He's called Dorabo and, although only a child, his lineage can be assumed to be grand within blood-sucking circles judging by the game's title which translates as 'Son of Dracula'. There aren't too many vampiric happenings in his game though, which is a typical side-viewed, scrolling platformer spread over five fairly long stages. Dorabo's job, surprisingly for a vampire, is to rid these lands of the evil demons which now populate them and to strike down their leader. However, he doesn't do this by biting them or slashing them with his claws or anything like that - aside from having fangs he seems more like a sorcerer's apprentice or something to me.

Indeed, his main means of attack is a magic wand or staff of some sort which can be thrust in the direction of the numerous enemy creatures (very few of which look like demons, or even anything slightly threatening) who cannot withstand its sparkly zap. Some of them drop items as they foom into nothingness too, including a Cape, which allows Dorabo to peform double-height jumps, Iron Boots, which allow him to squash enemies by jumping on them, a Syringe, which fires enemy-freezing jabs, and a Sword, which increases the strength of his magical zap. The effect of all these things only lasts for a short while but there are some other items which are less time-sensitive, the most awesome of which are the suits of armour! Three are available for most of the game - Silver, which offers invincibility, Blue, which allows double jumps similar to those enabled by the Cape, and Purple, which dramatically powers-up Dorabo's magic zap into screen-spanning energy bolts.

Rather than lasting for a set period of time, these helpful armours instead last for a set number of hits, so if you're careful you can keep them for quite a while. There are of course large, hideous bosses at the end of each stage (and some in the middle too) and the armour is especially useful when battling them, particularly the purple suit. There's even a super special Gold suit to be found near the end of the game which is essential for fighting the final boss. Most of the bosses don't pose too much of a problem though, mainly thanks to Dorabo's agile nature. His jump is a surprisingly high one, even without the Cape or Blue Armour, and it's fairly steerable too. He can also run with a double-tap of either direction and hide under his hat. As well as affording him a little protection, he can also launch Tomato Bombs from this defensive position which are often more effective than his zapper!

Luckily, Dorabo can take a few hits before losing a life. He starts with three hearts which go down in halves each time he takes damage but this reserve can be increased to five hearts by collecting the relevant icons. Strangely though, if you collect another one when you're already up to five you'll go back down to three. Hmmm. Many platforms also feature collectible tomatoes which are totted up in the bottom-right corner of the screen next to your lives. At first I assumed these were just for points or something (though in retrospect I'm not sure why as there isn't a score) but it turns out that they are destructive tomatoes which rain down on the boss at the start of the end-of-stage-battle, so the more you collect the less work you'll have to do. If you have a large stockpile of the tasty fruits as well as the purple armour (much like me, below), practically no effort is needed at all.

That's not to say Dorabo's game is an overly easy one though. For a start, it's cursed with the pesky regenerating enemy syndrome, and some of them can be a real pain too. Some fire stuff at you, others move erratically, including several airborne varieties. Actually, this brings to mind an unusual feature of this game - you can stand atop any enemy without taking damage (even the bosses when they're not attacking), and they even carry on doing their stuff while you're there. By taking advantage of this you can even hitch a ride aboard one of the flying nincompoops to reach secret areas! There are also some helpful Easter Island statues, activated by taking out blue bats, that reveal secrets or create makeshift platforms/lifts that help you explore further still. That's probably my favourite thing about the game too - the design of the stages. As well numerous secrets, some stages have alternate routes and/or short-cuts. It actually reminded me of the awesome Psycho Fox, one of my very favourite platformers, a little, what with all that jumping around on precarious platforms high above the more enemy-strewn ground route.

Much like Vic Tokai's game, Makai Prince is also lovely on the eyes and ears as well. Each stage has a pleasant, catchy tune and is filled with some mighty interesting sights. I'm not actually sure what many of the sprites are - some are animals such as birds, insects, tortoises, etc, while others are less obvious - but, whatever they are, almost all of them are superb, cute, original, or all of these things! The bosses are great as well, ranging from a large angry wolf, a cybernetic head/spider, a swamp monster, and a giant tree, to the very demons you're meant to be vanquishing, and they're pretty imaginative too. I was also surprised to find that the stages aren't themed as stereotypically as many platformers. The first stage does feature the usual grass and trees with a few caverns and cliffs thrown in for good measure, but the second appears to be based in a town of some sort, starting off amidst office blocks before descending into the stinky sewers.

After that there's a fairly typical (though nicely designed) sandy stage complete with moving sand, falling stalactites, and pain-in-the-arse scorpions, before you move on to high mountain passes and passageways, then the last stage which takes place in a hazard-filled fortress. It's a really nice looking game throughout though. The backgrounds are sometimes a bit plain and the colours are mostly quite dark but it's a nice style and suits the game pretty well. Dorabo himself is quite appealing too; plus control of him is nigh-on perfect and the difficulty is nicely balanced which, along with the pleasant aesthetics and stage design, makes this a highly enjoyable game. In fact, I enjoyed playing through Makai Prince so much that it kind of made me sad that so few gamers apparently know about it. It may be a slightly obscure Japanese exclusive but I'd never even heard of it until a few weeks ago! Oh well, it's hardly unique in that distinction I suppose, but unlike most of the titles I've not heard of (probably), this one is rather good!