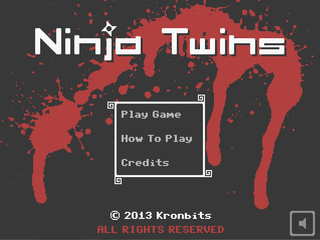 Like monkeys, anything featuring ninjas is automatically cool, and that's a fact apparently recognised by Spanish indie developer, Davit Kasia, a.k.a. Matriax, who recently released this puzzler on Kronbits, his own label. As you might've guessed from the title, there are actually two identical ninjas here, and square ones at that as well! Their home, for the purposes of this game at least, are 30 single-screened stages, each measuring 20x13 blocks in size. The object is to get one of them to the treasure chest that sits somewhere on each stage. It's not as easy as it sounds though, obviously. Firstly, the ninjas can be moved in four directions using the cursor keys but they'll keep moving until they hit something. Secondly, they both move at once and if they touch... it's game over!

To make things even tougher, you only get a set number of moves with which to finish a stage too! This means the stages have been designed in a very specific way with platforms and blocks placed exactly where they need to be to help or hinder your progress. Most of the blocks are normal, solid, unspectacular examples but some can be moved by... umm, moving into them, and another kind can be destroyed in the same way. After the first few stages you will also start finding shurikens here and there as well. These scary ninja weapons are stationery, which is good, but they're also predictably fatal to move into, which is less good. They also increase in number the further into the game you get as the stages get ever more complex and brain-frying. The stages are in fact divided into four groups - the first nine are supposedly 'very easy' (chortle) while the next ten are 'normal'. The seven after that are 'hard' while the last three are 'very hard'. Gulp.

I have not, however, as yet been able to test out these designations as I suck arse at this game. It is possible though, so I guess that just means it's been well designed. The presentation is certainly nice. There's no audio beyond a couple of effects and a quiet oriental jingle now and then but the four-colour grey graphics are very neat and pleasant and there are even some between-stage words of wisdow from our stealthy heroes. Those stages though... they'll drive lesser minds insane! It's one of those games where, since you know the ninjas can only move in a maximum of four directions from any given location, the solution to each stage is staring you in the face - but it'll still take about a million attempts to conquer some of them! It's free though, and more or less flawlessly executed, so if you get a kick from testing your puzzle-solving ability, give this one a try.