The early 90's were probably when we saw Sega at the height of their powers. Their splendid Master System was a big success here in the UK (and Brazil) but a failure everywhere else. The release of the mighty MegaDrive, however saw their success duplicated in all regions of the gaming world. It was a fantastic machine to be sure, but it didn't even have any serious competition either. That was, until Nintendo's long-awaited successor to the elderly NES arrived... 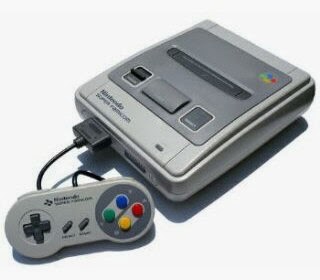 Being a Sega fanboy, basking in the dominance of the MegaDrive, I sneered at the first pics to appear of the Super Famicom and laughed most heartily at the hideous US SNES. Then, when reports began to emerge of its under-powered CPU which could only limp along at 3.5MHz, I openly mocked the pitiful grey slab. This poor performance often resulted in some major slow-down in games and was a joke compared to the MegaDrive. Even the secondary processor ran at 3.5MHz in Sega's machine with its main power plant running at almost 8MHz! It wasn't long before shots from games started appearing as well, and they did little to sway my allegiance. A new Mario game? Okay, but it doesn't look much better than the NES games. Sim City? Old PC game, blah, blah. Gradius 3? Not bad but the MD has plenty of decent horizontal shmups. Super Tennis? They'll need to do better than a tennis game to defeat Sega! But then, after the UK launch had been and gone, I saw some footage of F-Zero and Pilot Wings in shop windows. Convincing 3D graphics? What the devil? These games looked much more interesting and were of a type the MegaDrive, and indeed most previous systems, did not excel at.

Gradually, over the next year or so, my resistance was worn down more and more, mainly thanks to the amazing-looking F-Zero, but also due to the many other top titles appearing on Nintendo's new machine, and most unavailable on my treasured MD. Eventually the unthinkable happened - I surreptitiously let my parents know that I was no longer opposed to potentially owning a Nintendo product. Then, a few months later, as if by magic a wondrous gift was bestowed upon me - a gleaming new SNES complete with Super Mario World, the first pack-in game the UK SNES received. I would soon find out if my disdain was warranted or not.

Surprisingly, my first real time with it was spent at a friend's house. Usually I would 'premiere' a new system by myself, selfishly saviour the thrill of the newness alone, but this time I didn't. Myself and a few friends from college who shared my appreciation of WWF (wrestling, not wildlife) got together to beat the crap out of each other while pretending to be The Ultimate Warrior, Bret Hart, Mr. Perfect, etc, but the rest of the day was spent trying out my new console, and most of this time was spent messing around with Super Mario World which I was surprised to find didn't suck donkey balls like I thought it would. It was actually rather awesome! So awesome, in fact, that we forgot that I'd even taken any other games along with me - the whole day was spent collecting coins, exploring Ghost Houses, searching for secrets, mastering Mario's cape-flying, and all the rest of it. What a fun day that was and a true gaming memory...

Anyway, my introduction was over and I was now a fully fledged member (huh huh - member) of the Nintendo Owners Club, for better or worse, and it was down to the games to keep me there. Most would agree that the SNES certainly received some more than worthy examples over the years and I thankfully had a great selection spanning multiple genres right from the off: 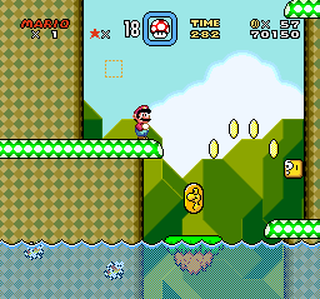 Oh Mario, how I mocked you and your creators when I saw your game on display in shop windows - "It looks ridiculous next to Sonic! Sega smite you!" I exclaimed. It wasn't long after this that I owned said game, however, and I quickly realised just how wrong I was. Sega's effort was indeed flashier, but that was about the only area in which it bested the portly plumber's game. In fact, as tough as it is to admit, I've even come to appreciate the graphics and music here more than Sonic's over the intervening years. How could I not? The beautiful use of colour, dozens of appealing sprites, and wonderfully catchy tunes make playing through it a pleasure - one which, contrary to Sonic's first game, has not diminished a bit since the day it was released. Add to that almost a hundred stages, an absolute truckload of secrets, and the introduction of the awesome Yoshi, and you've got one of the greatest platform games ever released. I was so proud the day I finally finished every single stage that I ran downstairs to tell my parents (not that they cared, of course)! 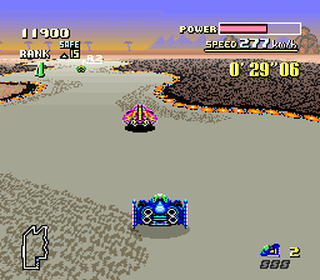 I have already written about this game many times here at Red Parsley so it's importance to me as well as the gaming world in general should be well known. Indeed, as mentioned earlier, it was the very reason I sought a SNES to begin with thanks to its remarkable Mode 7-powered visuals which were perfectly suited to the futuristic racing action on offer here. There weren't too many game modes - just Grand Prix and Practice - but the races were unlike anything seen before. As well as the usual hairpins, chicanes, and right-angled turns found in many such games, courses here also featured boost plates, ramps, sections of ice or gravel, trackside magnets, and various other things, all at speeds pushing 400kph! Combine this with some of the most original and distinctive course designs yet seen, fantastic music, and palm-sweatingly exciting action, and you had the finest racing game ever seen outside the arcades, and better than many inside the arcades too! I effectively bought a SNES for this one game... and it was worth it! (full review here) 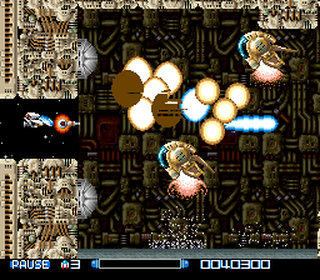 No new console is complete with a shoot 'em up and, at that time, I believe there was only the choice of this and Gradius 3. The SNES with its weedy little CPU reportedly struggled to run either game smoothly but Konami's game fared worst, supposedly, and that's what I based my decision on. It was therefore the Bydo Empire that I rained fire upon in this decent but oft-forgotten entry in the R-Type series which, despite its name, is actually much closer to R-Type II than the first game, featuring slightly re-jigged versions of four of its stages as well as adding a few new ones. That famous ship is present and correct though, along with its usual awesome weapons (I always loved the Rebound Laser) as well as a new (but crap) one. The music is fantastic, and typical of the new system's distinctive sound chip, and so are the graphics... with the exception of that slow-down which can be pretty bad at times. It wasn't enough to stop me from 'inserting' this cartridge many times though, and it's still the only R-Type game I've completed without cheating! 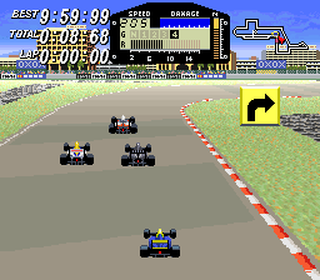 There were three main reasons this game featured prominently on my wish list. Firstly, it's an F1 game and I like F1. Secondly, it received some decent reviews. And thirdly, Mode 7 and F-Zero in particular had reinvigorated my interest in racing games so, as great as F-Zero is, I was eager to try out an alternative as well. Being an F1 game meant it was far less visually striking than the more futuristic game with its crazy course designs and features but it had much more depth. You could modify/upgrade your car for one thing, and doing so was necessary often to conquer the extensive career mode consisting of a full 16-race season complete with all the withertos and whyfors that come with it. In fact, you could race multiple seasons - an option I took up and excelled at, even if I do say so myself! It's certainly not as thrilling as F-Zero and first impressions aren't that great but there's a lot to see and do here and it's a game that kept me occupied for a long time. (full review here) This was one of the first games that really made me realise what a difference having a SNES could make to me - not because of its fancy graphical tricks or warbling sound chip like some of the other games available though - in the case of this game it was because of the controller. Smash TV was a popular overhead run 'n' gun arcade game at the time and, like its spiritual predecessor, Robotron 2084, it used a twin joystick control system allowing you to run and shoot independently. No home systems could duplicate this control method as well as produce an authentic looking and sounding conversion; that was, until the SNES! Its grunt ensured Super Smash TV looked and sounded like the arcade game (and wasn't plagued by slow-down either, despite featuring millions of sprites on screen at once) but its controller, with its four buttons in a diamond formation standing in for the joystick directions, meant it also played like it. An amazing conversion of a fantastic game, and still one of my all-time favourite two-player games too!


Having missed out on the NES altogether thanks to my unwavering (at the time) allegiance to Sega, the SNES and the games above comprised my first real Nintendo experience, certainly my first with the benefits of system/game ownership. Could I have asked for a better demonstration of Nintendo's splendidness? Very probably not! Despite my earlier mocking, Super Mario World was worth buying a SNES for by itself never mind some of the other games that would soon follow it. However, despite rightfully being very impressed with Nintendo's 16-bit monster initially, I never really embraced it as enthusiastically as I did my MegaDrive which continued to dominate my gaming time. Lingering prejudice, perhaps?

That said, I did end up with a collection of around 20-25 games including such all-time classics as Super Mario Kart, Super Bomberman, Super Aleste, Super Mario World 2, Super Metroid, and even a few non-Super games like Axelay and Legend of Zelda, and I enjoyed them all. The most important thing to come from my time with my SNES though, was overcoming my anti-Nintendo stance. A few years afterwards, for example, I was the proud owner of a Nintendo 64, and a GameCube after that. The moral here, I guess, is: to hell with stupid gaming rivalries and allegiances - you can miss out on some cracking games!